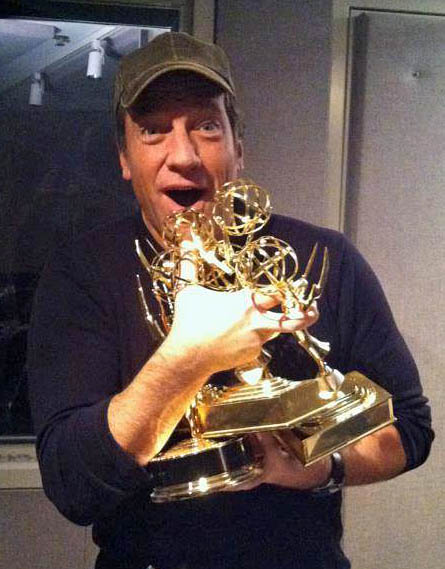 Back in 2000 something or other, Dirty Jobs with Mike Rowe was nominated for an Emmy. It was our first nomination, and like all the subsequent nominations, we didn’t win. But every year around this time, people ask me if I think Dirty Jobs will ever prevail.

Even now, after the show has been officially over for nearly a year, people still ask. Last week, a reporter wanted to know what my chances are this year.

Anyway, I was reminded of the time I addressed the question in The Mudroom years ago. Here’s what I said then. As a cautionary tale to those nominated and attending for the first time, I think it still has value.

Writing about my experience at the Emmys is difficult. If I approach the topic with enthusiasm I’ll appear no different from any other “host” who craves the approval of his peers and yearns to celebrate his good fortune in front of a room full of people who wish they were in his position and resent the fact that they are not. If I write with contempt, I’ll sound like a righteous snob who sees himself as “too good” for such choreographed displays of self-congratulatory pap, but attends anyway. And if I split the difference, I’ll seem political or apathetic – the enduring hallmarks of a sore loser. What’s a fake host to do? Well, since I was nominated in the “reality” category, I suppose I should just keep it real.

As for the nomination itself, I’ll say this – I was very pleased and sincerely happy to see Dirty Jobs recognized. Happy for the crew, the production company, the network, the fans, and most of all, the 200-plus genuine “hosts” who have provided Dirty Jobs with a set and a cast these last four years. Everyone knows I’d like more people to watch the show, so any recognition is a good thing, and I’ll take whatever I can get. So for that, I’d like to thank the Academy …

Regarding some of your prior questions on this topic:

Was I personally surprised by the nomination?
Yes.
Did I expect to win?
No.
Was I disappointed or surprised by the outcome?
No.
Was I “honored” to be mentioned with the other shows in this category?
No.
Do I think Emmy Awards have anything at all to do with the quality, relevance, importance, or popularity of a show?
No.
Not even a little?
No.
Would I have preferred to win anyway?
Yes.

Regarding the event itself, I can tell you this. It lasted five hours. And, friends, five hours is too long to sit in one place.

It’s too long for a play. It’s too long for a film. It’s too long for an opera. And it’s way too long to sit in the giant Nokia Theater, waiting to hear your name mispronounced by one of your peers. Really, the only thing I’m still happy to sit through for five hours is a cross-country flight. I’m still amazed at the efficiency of air travel, and count my time buckled in low and tight across the hips as well worth the necessary captivity. However, I know going in exactly how long a cross-country flight is supposed take. And barring any unforeseen problems, I know that after a movie, a nap, a bottle of wine, and several chapters of something worthwhile, I’ll arrive in another time zone several months faster than my great grandfather could have ever imagined.

The Emmy Awards, however, offer no such certainty. There is no flight plan. You simply sit there: an unpaid extra in an elaborate production that may or may not require your actual participation. Unlike a mere attendee, you are powerless, because though you have been nominated, you have not been told exactly when your category will be announced. In fact, you are given no information whatsoever as to the approximate time your presence might be suddenly required on stage. Consequently, you are afraid to get up and stretch your legs, or, God forbid, use the bathroom. You are “on call,” and can only sit there in there in stunned amazement as a gaggle of nominees make their way on stage to individually accept an Emmy for “Outstanding Innovation and Achievement in Advanced Media Technology for the Best Use of Personal Media Display and Presentation Technology.” (Really.)

During that first hour, it’s really not so bad. Kind of festive, really, with a pleasant anticipation in the air. You let your mind wander, and consider your remarks should you actually win. You vow to keep it light and pithy. You rehearse it in your head. Then you think about the two pints of beer you drank in the lobby, and wish you’d gone to the bathroom before sitting down.

One hour stretches to two. The categories become more esoteric. The speeches, more incomprehensible. The cruel combination of not knowing when the event will conclude and not being able to get up and pee leads you to ponder absurd scenarios. (Are you on some kind of hidden camera show, where the cameras aren’t even hidden? Is the whole thing an elaborate joke, perpetrated by Barsky and friends? Are you being punked? At what point will you simply give up and pee your pants?) The phenomenon is not dissimilar to being caught in a traffic jam with no foreseeable resolution. You feel a whisper of claustrophobia and desperation.

Two and a half hours into the ceremony, you realize you are not alone. Hundreds of actual celebrities are checking their watches in quiet disbelief. These are people unaccustomed to waiting, and you can see a restlessness rippling through their ranks. Oddly, their misery brings you no comfort. You start to notice that each time a winner is announced, the losers surreptitiously make for the nearest exit, repairing no doubt to the lobby to slander the victor and drown their sorrows. You watch them leave with naked envy, as your former anticipation turns to resentment. You want out, but you can’t move. Your category might be next. And who knows, maybe you’ll win?

By the third hour, a palpable heaviness falls over the entire proceeding. You feel it in the air. The applause is now forced and half-hearted. You no longer care who wins, and feel foolish for the brief time you did. You don’t care about anything but getting some food and finding a toilet, and not in that order. Interestingly, you’re also drowsy, but have to pee so badly you dare not nod off. Tedium and discomfort vie for dominance as you scribble nonsense on the back of your worthless program, trying in vain to think about something that isn’t your distended bladder, and wondering how many others are close to soiling their tuxedos.

By the fourth hour, you are lapsing in and out of a fugue state. It’s impossible to concentrate on anything. Glancing down, you see that your doodling includes some legible words, some of which happen to be the Kubler-Ross Five Stages of Grief, somehow channeled from a long-forgotten psych class. You nearly laugh to realize that you have experienced all five in as many hours. Denial, Anger, Bargaining, Depression, and finally, Acceptance. You have come to terms with the reality that you are not only helpless, but maybe in danger. You think of blood clots and pulmonary embolisms, and all the other infirmaries that come from sitting still for hours on end with no hope of future locomotion. Your left foot is asleep, and you ponder the vagaries of restless leg syndrome. On stage, more shtick. The Dog Whisperer is speaking to Lassie in a language neither English or canine, as evidenced by the confusion of the poor collie and everyone else in the room.

(I just realized I’ve been writing in the second person. Forgive me. Perhaps I’m not ready to discuss this in detail? I’ll wrap it up now.)

My category – “Best Reality Show” – was the second to the last category. I couldn’t tell you the last category, because Kathy Griffin was sitting right in front of me, and when I heard her name announced, I leapt to my feet and bolted toward the lobby as she and her retinue sprinted toward the stage. Reaching the exit, I heard several F bombs explode behind me, as Ms. Griffin accepted her statue with typical class and restraint. I’m not criticizing. Her profanities were certainly less offensive than my exploding bladder would have been, had I run for The Stage instead of The Toilet. As it was, I arrived at my own porcelain prize with less than one second to spare, and expressed my gratitude there with a thoroughness and sincerity that I believe many in The Academy would have applauded, had my performance not so egregiously exceeded the allotted time.

PS: In honor of this year’s event, I feel duty bound to remind those that have read this far about a far more suitable trophy, specifically designed for those who fall just short of the mark. Several remain. First come first served. CLICK HERE: “Mike Rowe Signed “You’re Number 2” Poop Plaques “