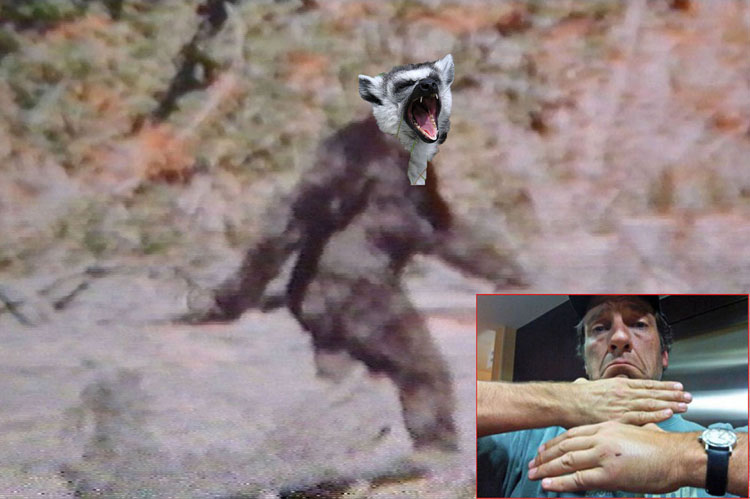 Last week, I mentioned in a C.R.A.P. video my lingering resentment toward a lemur in Texas named Fiona, who had the effrontery to attack my ungloved hand for no good reason and infect me with her deadly lemur-spit. Not long after that video was posted, I was thrilled to see that the details of my unlucky encounter posted on The Bigfoot Evidence Page: Mike Rowe Talks About What It Felt After a Lemur Bite

There, I learned that Melba Ketchum, a veterinarian (also from Texas) has floated a fascinating theory on the origin of Bigfoot. In fact, she has revealed some new DNA evidence that suggests our modern-day Sasquatch is the product of distant romance between an “early hominid and a 500-pound lemur.”

With the image of that unholy coupling forever seared into my mind’s eye, I read on: “If you buy into Ketchum’s theory that Bigfoots are part human and part lemur, Mike gives us a pretty good idea of what it probably feels like to be bitten by Bigfoot.”

I just wanted to take a moment to say “you’re welcome.” I’m gratified that my encounter with Fiona has provided this unanticipated public service, and I would like to officially go on the record – as a witness to science and history – to describe the sensation of being bitten by Bigfoot’s cousin…

P.P.S. For those of you determined to make a polemic out of everything, you’ll be pleased – or horrified – to learn that 25% of registered Democrats are in the tank for Sasquatch, as opposed to 21% of Republicans. Of course, 79% of people now believe that a 60-foot prehistoric shark is still out in the ocean, so all in all, I guess, as a people, we’re still fairly skeptical on the Bigfoot thing. Discovery Channel Provokes Outrage with Fake Shark Week Documentary