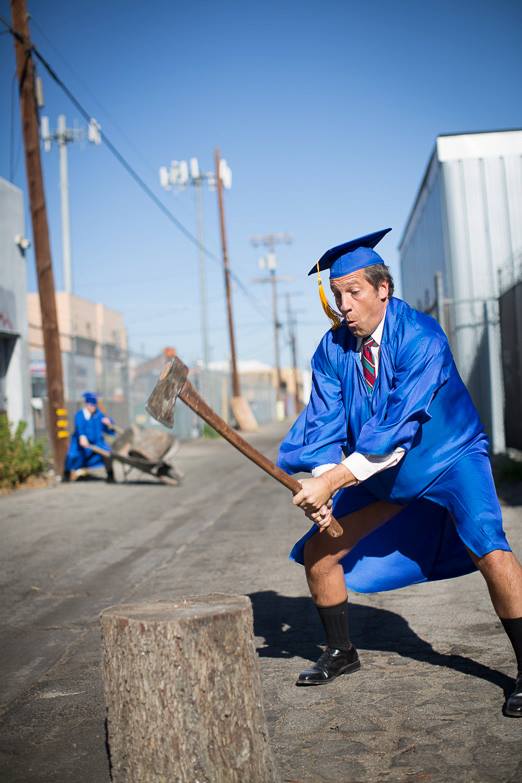 First of all, thanks to the men and women of the U.S. armed forces, and Happy Memorial Day to you all.

Secondly, a special thanks to my dad, who did his time on the Korean peninsula back in the day.

Thirdly, and somewhat relatedly, this month’s Popular Mechanics is dedicated to fathers. The editors asked me to write a few words about my dad, and I agreed. The published version appears on page 55 of the current issue of Popular Mechanics , else the unedited version is below. (I have a hard time staying within the allotted word count.)

When I was 14, I woke up one Saturday morning to see my father standing at the foot of my bed, sharpening a double sided ax. “It’s time.” he said. “Let’s go.” My father has a tendency to start conversations in the middle. He’s also suspicious of anything too modern.

“Time for what?” I said. Knowing the futility of the question before I even asked, I rolled out of bed, pulled on my jeans and work boots, and tried again. “Is it cold out?”

“Invigorating,” he replied. “Your mother made oatmeal. Eat it fast.”

Outside, the Massey Ferguson idled impatiently, as we loaded up the wood cart with ropes and pulleys, jacks and wedges, two chainsaws, and various other weapons of war. My mother added a lunchbox to the arsenal, along with a large thermos of coffee. It stated to snow. “Try not to kill yourselves,” she said. “Dinner’s at 6.”

I can’t even remember how many times my dad and I drove the old tractor down the stone road, through the lower pasture, and deep into the woods to do battle with the Pine, the Maple, the Oak, and the mighty Locust – his personal favorite. (“The hard wood puts up a tough fight, but it burns the best!”) The fact that we heated most of the old farmhouse with nothing but a wood stove was a source of great pride for my father, and the inspiration for endless witticisms. (“Chop your own wood – it’ll warm you twice!”)

Finding the right tree and taking it down properly was an undertaking that my father relished. Though there was nothing valuable nearby for the tree to fall on, my father liked to pretend there was. He imagined himself as the contestant on some sort of lumberjack game show, challenged perhaps to drop the tree between a Mercedes and a school bus full of children with inches to spare on either side. With pulleys and ropes and lots of delicate chainsaw work, he would coax the tree to the ground, determined to see it land precisely where he wanted it. (“Measure twice, cut once! That’s the ticket, my boy!”)

Once on the ground, we’d strip the limbs and branches and cut them to stove length pieces. Then we’d turn our attention to the trunk, working backwards from top to bottom. As each cut became progressively thicker, the chainsaw whined louder and higher. (“Sharpen that blade, son. A dull one’s twice as dangerous!”) I still remember how my arms shook, even after the thing was turned off and put away.

Hauling the wood back to the house was a full day’s work. But splitting the larger chunks into pieces that fit the insatiable wood stove – that was a chore without end. Every day after school meant an hour in the woodpile with Dad. And I can still hear his voice as I prepared to swing the ax: “Aim for the chopping block, Mike, not the wood. If you aim for the wood you’ll hit nothing.”

Einstein (being Einstein) was right. Chopping wood yields immediate results, and it’s gratifying to see progress unfold. But up there in the woodpile, the real gratification would be delayed. Because my dad was not just teaching me how to swing an ax – he was teaching me that work and play work were two sides of the same coin. He was showing me how to enjoy the challenges of doing a hard thing. He was preparing me to become a perpetual apprentice – a role that would eventually define my unlikely career in television.

A few years ago, I stumbled across a poem by that I had forgotten about. It’s called Two Tramps in Mud-Time, and it took me back to those days at the woodpile with my dad. In it, Robert Frost is splitting wood in his own backyard, ruminating on work and life. He wrote:

“My object in living is to unite
my avocation and my vocation.
As my two eyes make one in sight.

For only when love and need are one
And work is play for mortal stakes
Is the deed ever really done
For Heaven and for future’s sake.”

My dad is 80 this year. He no longer ventures into the woods or swings the ax. But the blade is still sharp. And the trees still fall where he wants them.