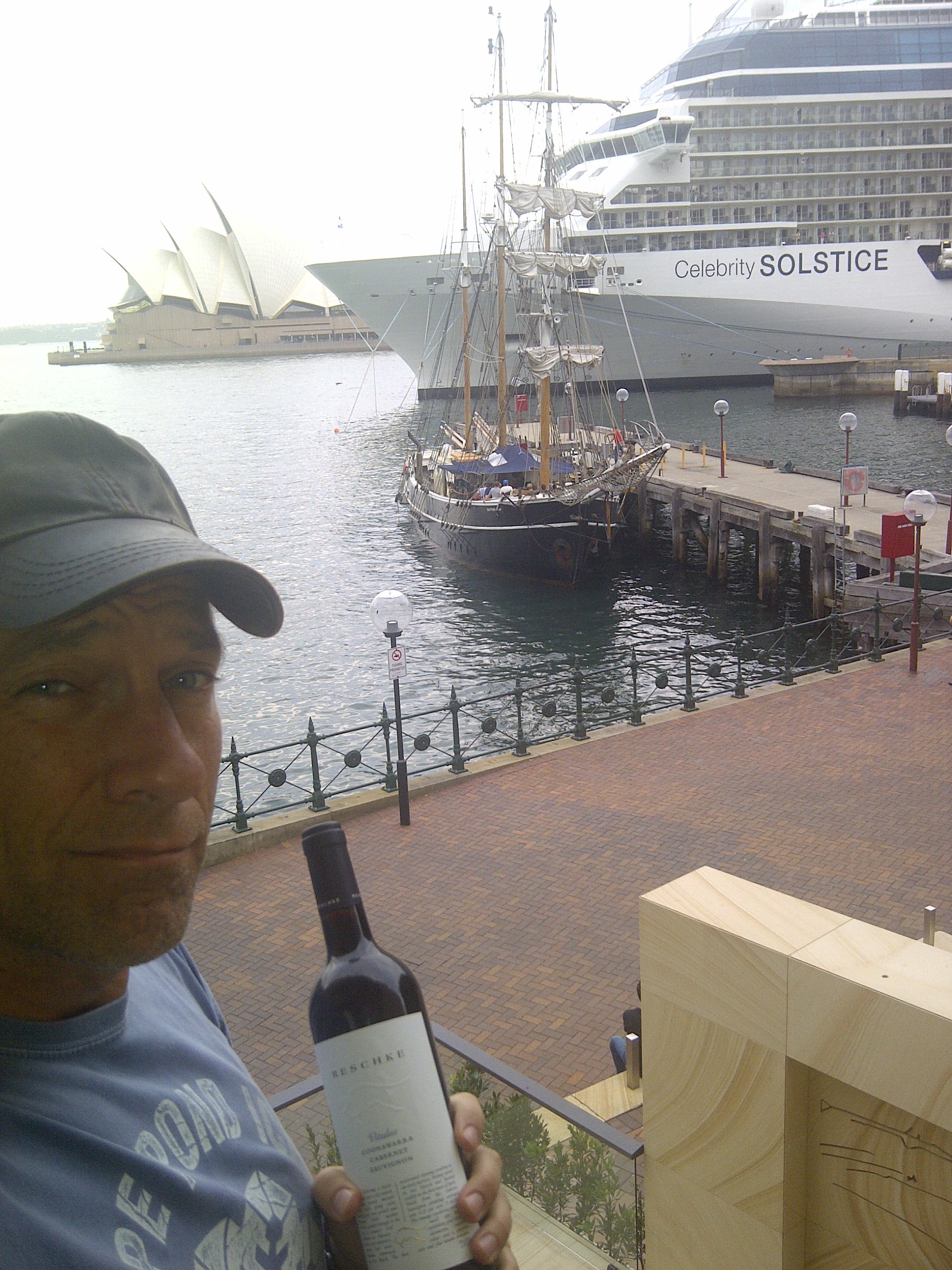 Today’s Lesson in Pointless History comes from Sydney, Australia, where I find myself on this 29th day of March. I flew down here to help Discovery International promote Dirty Down Under, and just checked into a hotel far more civilized than any of the accommodations I enjoyed on my prior visit. Several things to note, from my view of Sydney Harbor.

1. The Tall Ship, Southern Swan.
Built in Denmark back in 1922, she spent the useful part of her career as a grain carrier, and then hauled countless kegs of Tuborg beer between The Netherlands and Greenland. With a stiff breeze, she can make 20 knots. Today, she provides tours of Sydney from the water’s edge, and gives tourists a look at what it might have been like to live and work on the kind of maritime miracle that helped make civilization possible. She’s 130 feet long, and holds 90 passengers. Later today, I plan to be one.

2. The Celebrity Solstice.
Another sort of ship, barely visible there in the background. This sleek and subtle sloop has been lumbering through the high seas since 2008, casting its shadow and blocking the views in various ports of call from here to Alaska. Ponderous yet ungainly, she measures over a thousand feet in length, contributes nothing to Western civilization, and weighs slightly less than New Zealand. With a unique blend of taste and restraint, this nautical monument to sloth and avarice can approach speeds of 28 mph. But more importantly, she captures all the ambiance of the Vegas Strip and combines it with the excitement of an early bird special at The Golden Corral. If the Mall of America could float, and somehow park in your front yard, it would look a lot like this. The Celebrity Solstice boasts 19 separate decks. With proper stacking, I’m told she can carry 4,350 souls. I have no plans to be one.

3. The Sydney Opera House.
By way of comparison, the opera house is visual proof that a thing can be large and beautiful at the same time. With a capacity of 5,738, this architectural marvel can accommodate more people than the Solstice and the Swan combined – giving rise to the question: Are there really that many opera lovers out there? Commissioned in the 1950s for a budget of $7 million, the project hit a few roadblocks. It was finally completed in 1973, at a cost of $102 million. (Oops.) The architect was a guy called Jorn Utzon (though I can’t spell his name properly because my computer won’t make an o with a line through it.) Of course, much of what goes on today at this world-class venue has nothing to do with opera. Wilco is playing tonight, and Handel’s Water Music will be performed next week. I hope to see the latter.

4. A bottle of Reschke. This is a 2008 Cabernet from Coonawarra. I’ve never tried it. It’s about a foot tall, and can only accommodate one or two passengers. I will be boarding shortly.

5. The photographer. He is 6 feet tall and has been awake for the last 48 hours. His top speed is less than either ship, but much faster than the Opera House. Though also plagued by design flaws and cost overruns, he is still functioning.