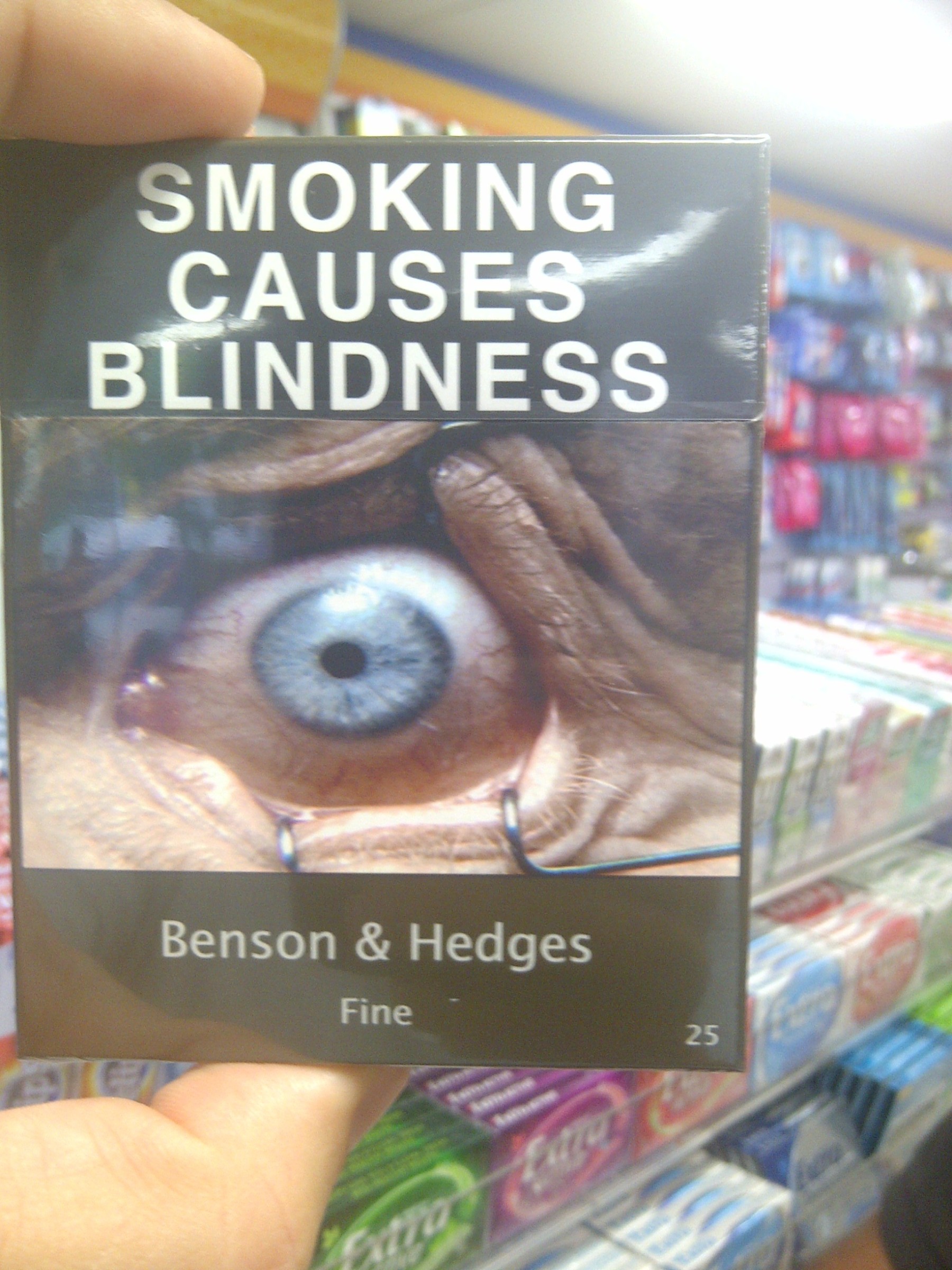 So I go into a convenience store last night here in Sydney to get a bottle of water and some Tam-Tams. (Late night. Don’t judge.) The guy behind the counter looks just like Paul Hogan. (Not present-day botox Paul Hogan with major tax problems, Crocodile Dundee Paul Hogan. He had the hat and everything.) Anyway, as the guy is ringing me up, I notice a sign on the register that says, “Cigarettes under lock and key.”

“What’s up with the cigarettes?” I say. “You afraid they’re gonna run off?”

“Roight, bit that’s not the problim,” he says. “The problim is that ahm in heer all bah meeself, and ah swee-ah, ah think sometimes the bahstards are steerin at me!”

Paul Hogan then proceeds to unlock a cabinet and toss me the pack of cigarettes I’m holding in the photo.

With that, Paul Hogan starts to unload pack after pack of cigarettes from Dr. Cailgari’s Cabinet of Horribles, spreading them out on the counter before me. Each one is more gruesome than the next. Many feature close-up color photos of diseased lungs removed from the corpses of cancer patients. Some show premature babies, stunted by cigarette smoke. I’m transfixed by a pair of rotten, bleeding feet on a pack that warns, “SMOKING CAUSES CIRCULATION PROBLEMS.”

The worst, though, is a picture of “Bryan, Age 34,” taken from a hospital bed moments before his death. He looks like a prisoner in Auschwitz. Next to that image is a smaller snapshot taken 10 weeks prior of a completely healthy Bryan, smiling on a beach somewhere.

“Good Lord,” I say, “How many of these things do you actually sell? I mean, who would pay $25 for a pack of smokes with a dead baby on the front?”

“Yid be serproised,” he said. And with that, right on cue, a kid came in, plunked down 25 Australian dollars, and said, “I’ll ave a pack of those,” pointing to the blind eyeball in my hand.

I handed over the smokes, and Paul Hogan rang the kid up.

“Ave a noice noight,” he said.