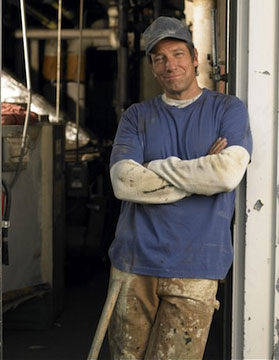 Hello, my name is Connor Watkins, and I am twelve years old. I met you last fall with my dad at the Cleveland Airport. At school we were told to ask successful people what the most important lessons in life are. I asked my parents who told me it was important to treat others the way you want to be treated. I also asked my cousin and he explained life is ten percent of what you make and ninety percent how you take it.

I am writing to you because you have been very successful, and I would like to learn what the most important lesson you have learned in life is. I think you are successful because you starred in your own unique television show. In addition, companies have asked you to endorse their products. Recently, you have started a charity to support the skilled trade workers. I have seen several shows and I have been impressed by how you are able to get a serious point across in a funny way.

I would hope that you might be able to respond with a letter containing your advice on a valuable life lesson and what makes you so successful. Thank you very much for taking the time to read this letter.

Thanks for the note, and thanks for calling me “successful.” It’s a nice compliment. But here’s the thing about success that you might want to remember – it’s impossible to tell for sure who is successful just by looking at them.

A lot of people who work in television look pretty successful, but believe me, when it comes to real success, being on television doesn’t mean squat. Part of a celebrity’s job is to maintain the appearance of success. But many of them live way beyond their means. And lots of them are simply not what you think. (Paging Lance Armstrong…) That goes for non-celebrities too. You can look out your window right now and see a lot of anonymous people driving nice cars and wearing fancy clothes and looking very “successful.” Don’t be so sure. Many are drowning in debt. Prosperity doesn’t always look prosperous, and happiness doesn’t always resemble success. Real success is difficult, both to achieve and to recognize in others.

As for lessons, I’d say be suspicious of anything too easy. That includes school, money, and girls. The world is full of examples of “overnight successes,” because TV tells people they can be the next American Idol. People really, really, really want to believe that success can happen fast. Well, it doesn’t. Most lottery winners wind up bankrupt within ten years of winning. Why? Because they didn’t earn it, and if you don’t earn a valuable thing, you won’t know how to handle valuable things when they appear. Truth is Connor, there are simply no shortcuts to success, and anyone who tells you otherwise is probably selling something.

Also, be careful of what you admire. “Talent” for instance, is worthless in and of itself. It’s kind of like having a high IQ. Unless you do something with it – unless you work at it – you probably won’t succeed. That’s important, because if you do actually manage to accomplish something without first working hard, you won’t feel successful. And that’s the real secret of success – when it comes right down to it, feeling successful is no different than being successful, because success without satisfaction is not really success. And success without prior failure is a fairy tale.

Good luck out there. Be patient. Work hard. Show up early, stay late, and always volunteer to wash the dishes. And laugh whenever possible.