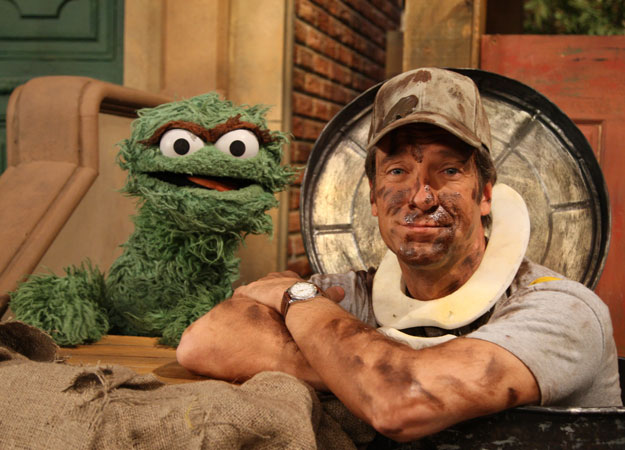 This was a very strange day. A good day, but a strange one.

I had been up most of night before, distracted by the many temptations of Manhattan, specifically a jazz trio in The Blue Room at The Algonquin that played till 5 a.m. I arrived at the studio in Queens two hours later, groggy to say the least. I know as much about Sesame Street as the average guy my age — The Muppets and music and talking letters and the like.

Kristen, however, who worked at Discovery back then, was along for the ride. And she is a veritable library of Sesame Street history and dogma. (She also takes or helps pick the photos to post on this page, and just sent me this one for my consideration today.)

Anyway, there we were on the venerable Sesame Street. Kristen was star stuck, I was hungover, and the Muppets or puppets or whatever they are were out in full force. I assumed my job that day would bring me into contact with Oscar the Grouch, and I was correct. With the cameras rolling, I found myself engaged in an extemporaneous conversation with a dirty sock that lived in a trashcan. (Actually, it was with a very nice guy named Carroll Spinney, who has provided Oscar with a voice since the late ’60s. But really, when you talk to one of these things for a few minutes, and really look into their fake eyes, it gets kinda real.)

Now, as some of you may know, I can be a smart-ass from time to time, and prefer to end most on-camera conversations with something inappropriate that the editor can delete later on. On this day, that very thing occurred when Oscar the Grouch invited me into his “trash can.” And further instructed me to “use the back door.” To which I replied, in a way that was both tasteless and untrue, “I always wanted to go in through the back door.”

If you watch the tape for yourself, you won’t hear Kristen scream in the distance, but I can assure you she did. What you will see, however, is me getting away with a cheap and childish double-entendre on the most famous children’s program in the history of the world.