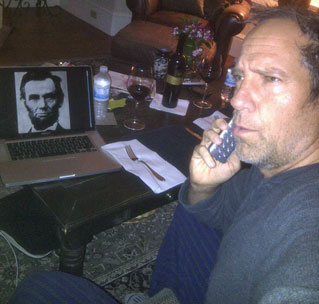 There’s lots of press out there around a documentary called Killing Lincoln, airing next month on the National Geographic Channel. It reminded me of a phone call I got from Tom Hanks a few months ago. Conversation went like this…

Mike: Get out of here.

Mike: Say “life is like a box of chocolates.”

Tom: (Sigh) “Momma always said, life is like a box of chocolates.”

Mike: Actually, no. I didn’t know that.

Tom: Well, I am. He’s my all-time favorite president. Ever.

Tom: Yeah well, I love him, Mike. And I’m not ashamed to say it. I love, love, love Abraham Lincoln.

Tom: Did you know that we’re related?

Mike: You and Lincoln?

Tom: That’s right. On my mother’s side.

Mike: I didn’t know that.

Mike: In fact, National Geographic is making a documentary out of it and I’ve been asked to narrate it. How cool is that?

Mike: You want me to get you a copy of the DVD?

Tom: No. I’m calling because I have to narrate Killing Lincoln.

Mike: (pause) You have to narrate it?

Tom: Yes. I simply have to. You see, I really love Lincoln. And us being related and all…

Mike: Look, Tom, this is a little awkward. I’ve already agreed to narrate Killing Lincoln. They asked me months ago and I said yes. There was a press release and everything. It would be weird for me to just, you know…drop out.

Mike: You don’t think so?

Tom: You also narrate all those cool documentaries for Discovery?

Tom: And you’re the voice of Ford too, right?

Mike: Yeah, but I don’t understand what that has to do…

Tom: You bet. He’s the only guy I can rely on for news and information with no spin.

Mike: Didn’t he call you a “Pinhead?”

Tom: That was a long time ago. Today I’ve come to realize that Bill O’Reilly is the only newsman I can really trust. There’s just something about the way he reads the news … like he’s talking only to me.

I just want to help Bill and Fox News bring Killing Lincoln to the big screen.

Mike: This isn’t the big screen, Tom. It’s not even HBO. Do you even do TV anymore?

Tom: Only if it’s about Lincoln. Or World War II. Or space. I love space. I would really love to do a movie about Lincoln on the moon. Do you think people would enjoy that?

Mike: Well, a bunch of people just watched a movie about Lincoln hunting vampires. So I guess anything is possible.

Tom: Oh my God, I loved that movie. (pause) Did you narrate that too?

Mike: Look Tom, if Killing Lincoln really means that much to you, I’m happy to step aside.

Tom: Thanks, Mike. This means the world to me.

Mike: Don’t mention it. The guys at Nat Geo are very nice, and I hear they’re doing a film version of Killing Kennedy sometime next year. Maybe they’ll let me narrate that one?

Tom: Actually Mike, John Kennedy was my second cousin. Did you know that?

In hindsight, I may have dreamed up the whole conversation, but I’m pretty sure it happened exactly as I’ve described. What do you think?