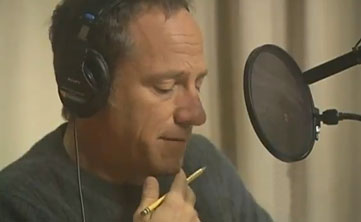 Q: Mike, have you seen this? Celebs muffle the voice of experience

Even though you are considered a celebrity are you concerned that you may lose out on future voice over jobs, or are you well known and respected enough to not have to worry? — Liz

For the past few years, the LA Times has run a version of this article. It’s a big topic in an industry town, and it’s a subject that’s kind of fascinating for me personally, mostly because I’ve been on both ends of the situation. The voice over business (at least, that portion which is overseen by the union) has for years been the most efficient and enjoyable way for an anonymous Joe to make a very, very comfortable living. Even though the competition is stiff, the work itself is easy. I don’t mean for that to sound glib – I just mean that in a relative world, sitting in a climate-controlled room with your favorite beverage and telling a story is a pleasant way to make a buck, and thanks to the union, the bucks in question are considerable. Consequently, VO and narration have always been considered plum jobs among non-celebrities who are striving to prosper in a very competitive market.

Of course, any job that pays a lot of money for a little amount of effort is usually an anomaly, propped up by some artificial force that temporarily trumps supply and demand. They just don’t last. In this case, the “anomaly” that allowed a giant number of non-celebrities to compete for a tiny number of jobs that pay a lot of money was driven by the belief among celebrities that the work in question was “beneath them.” So, they stayed out of it, and their representatives discouraged them from going there. (This is the sort of rank arrogance I’ve alluded to before – the idea that big stars who make their living on commercial television look down their noses at the advertisers who ultimately pay their salaries – hysterical.) That sentiment however, has started to change. Not because of some new-found sense of humility, but because the money is just too good, and advertisers and clients (and of course consumers) are besotted with celebrity.

What’s interesting to me, is the way in which people cry “foul,” and the relative complaints of those who have been affected. For years, I fought for the scraps in the VO business, auditioning constantly and forever redoing my demo tape. It was slow going. When I was struggling to earn a living, (late eighties) I was resentful and envious of the fact that a handful of anonymous people were making the vast majority of money in the VO business. I wanted very much to be among the few who were making the lions share. (Jack Edwards, and old friend from New York, was making a million dollars a year auditioning for the same jobs that I was just a regular guy that no one had ever heard of.)

Later, (in the late nineties) I got my wish. I started to book a lot of work. I didn’t crack the “Top Tier,” but I was working every week, and feeling very pleased with myself in the way that people do when they start to see their hard work pay off. I was also feeling resentful and envious of movie stars like Gene Hackman who came out of nowhere and started to compete with little old me. (Hackman got the United Airlines account, which I had auditioned for and very much wanted.) I commiserated with my friend Jack. We both felt that Hackman had “cheated,” and couldn’t understand why he was taking work that he clearly did not need.

Today, a lot of people in the VO business (including Jack) look at me in the same way I looked at Hackman. And everyone in the industry looks at homeless guy – Ted Williams – as another kind of outlier that cheated the system and took opportunity from those more deserving. And so it goes.

Truth is, talking into a microphone is worth a lot of money. Part of that is due to the fact that there is a lot of money to be made in advertising, and part is because the unions made a good deal. But what this article really comes down to is the same tension that dominates the national conversation – the fact that there is nothing “fair” about the VO business. One percent of the people in are making 99 percent of the money. And that makes good copy.

P.S. to answer your question Liz, no. I’m not worried.

3 thoughts on “Celebrities in Competition with Veteran Voice Actors?”