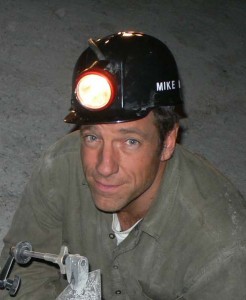 Letter to Mike and company

I saw your talk on TED.tv..and wanted to tell you..  I have a 19 year old son who watches your program religiously. He’s a very bright kid; talked for a long time about going into law. A year or so ago..I stopped hearing so much about that. He graduates from highschool in a week or so. Two weeks ago, he sat down with me and said..mom? This is what I want to do.

This summer, instead of heading to Oregon to work for his uncle, he’s enrolled in an apprentice program for carpentry. Its a special program; will take up his summer. Next fall, he goes to college as planned–to get his bachelor’s in business. He had it all laid out; said..he figures it’ll take him about six years to get to where he wants to be–a general contractor.  This is a boy who could do pretty much anything he wants to in life, but this is what he’s chosen..and I’m sure..much of it..comes from..you.

Its not that I’m unhappy with his choices; I’m not. I used to tell him..I don’t care what you do with your life–but the college degree has to be there. Get your schooling; do what you want. I shouldn’t really be surprised either. My dad was an electrician. His father installs fire sprinkler systems; has been a plumber and a welder in his time.   His father, however..is disappointed. He told me..I just didn’t want him to go into blue collar work.

But Mike? I honestly believe that my son..due to much of your influence..has thought this out. He has the option to do other things..but that’s not his choice; its not what he wants, and frankly? His eyes never sparkled talking about law school..like they did when he told me about this program..and his plans. He’s not doing this because he has to; he’s doing it because he wants to.

So..I owe you thanks in playing a role in my son’s life to help him find his place in life. Oh and..by the way. The episode about the lamb testicles? First time in my life I’d ever gagged watching a television show.

I’m happy and humbled to read your letter, and honored to play a small role in the choices your son is making. The entire scenario you describe reflects many aspects of why this site was formed, and what I hope may come of it.

First I’d like to say to your husband, that I appreciate and understand his desire to see his son achieve something more than he. But I would also add that I know several successful attorney’s who feel the exact same way about their kids. I think it’s normal and rational to want our children to do better than us, no matter what or how well we do. It’s a kind of bias that can’t be helped, and I think he’s sensible for feeling the way he does. But I also strongly suspect he has minimized the importance of his own vocation. That too, is a kind of humility I see all the time in skilled tradesmen. Please give him my best regards.

Thirdly, I can’t say enough about the significance of a good General Contractor. This position, more than any other, magnifies the balance between the color of collars. The ability to actually build a thing, while managing the business part of the deal AND overseeing the various personalities involved, is to me, the embodiment of a balanced and vital profession. Such individuals will never want for opportunity.

Please tell your son that the most interesting people I know are north of 50, and still figuring out their professional lives. Your boy is obviously smart. The trick now, is to remain curious, and open to the opportunities that present themselves to smart, curious people. Please give him my best wishes and congratulations. And while you’re at it, tell him he lucked out in the Mother department as well.