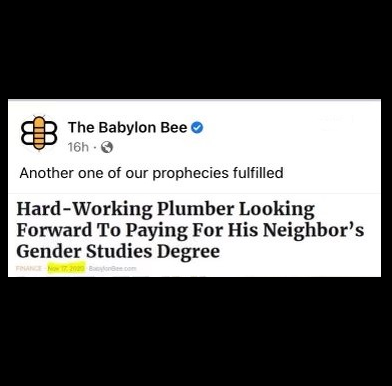 Two years ago, this was the headline of an article in The Babylon Bee. I laughed at the time, because it was satire, and it was funny, and frankly, I didn’t think it would happen. Today, I’m not laughing. Because today, a satirical headline is now the sad truth. Sad for the plumber, and sad for the country. But sad too, for the plumber’s neighbor, a woman with a gender studies degree she couldn’t afford.
Satire aside, what might compel an otherwise rational person to borrow tens or hundreds of thousands of dollars to purchase a diploma that offers little chance of a career that would allow them to pay off their debt? Where is the voice of reason, or caution, or common sense in this woman’s life? All of the voices it seems, are offering the same advice, and that advice is terrible. Terrible, not because it’s inherently bad, but because it’s a one-size-fits-all approach to one of the most important decisions a person can make.
To be fair, I don’t know what a person can actually make these days with a gender studies degree, and I certainly don’t think that all gender studies graduates are created equal. What I do know, is that a good plumber with a decent work ethic can make six figures all day long. I also know that lots and lots and LOTS of people with college degrees are drowning in debt, and unable to find work in their chosen fields. The question is why, and the answer seems clear. For the last forty years, we have – as a society – put an extraordinary amount of pressure on an entire generation of kids to borrow whatever it takes to get a college degree. The pressure comes from all sides. Parents want their kids in the “best” schools. Guidance counselors are evaluated on the number of kids they can steer into four-year institutions. There is no longer a rational conversation around the subject, much less anything resembling a cost/benefit analysis. Instead, there’s fear. Fear shared by countless kids that if they don’t go to college, they’ll never amount to anything. And it’s only getting worse.
At every turn, our elected officials have made it clear – people with a college degree are more valuable to society than people without one. And, at every turn, our culture reflects this. The stigmas, stereotypes, and misperceptions that keep people from pursuing a career in the trades are rampant, and no less fallacious than the belief that a college diploma is some sort of golden ticket to prosperity and job satisfaction. Is it any wonder the cost of college has risen faster than the cost of food, energy, real-estate and healthcare? Is it any wonder there’s $1.7 trillion in outstanding student loans today? Is it any wonder we have 11.5 million jobs that nobody seems to want, most of which don’t require a college degree? Is it any wonder the plumber’s neighbor in this satirical, but all too real article, can’t pay off her diploma?
Don’t get me wrong. The biggest victims of this debacle are the millions of hardworking people who paid their bills and lived within their means. I refer both to those who chose not to attend a college, and to those who graduated with a degree they paid for. I refer to the hundreds of people I’ve profiled on 20 years of Dirty Jobs – welders, painters, HVAC specialists, electricians, plumbers, appliance repairmen, mechanics, and so forth. The vast majority of those individuals didn’t attend college. Consider too, the people we’ve assisted through my foundation.
In the last 14 years, mikeroweWORKS has awarded over six million dollars in work ethic scholarships to nearly 1,700 people. We focus on individuals who affirmatively choose to forego a four-year degree, in favor of mastering a skill that’s in demand. Those people are livid today, and they have every right to be. Because no one in office is proposing to “forgive” the cost of their work truck, or their bulldozers, or their backhoes, or any of the other tools they need to labor in their chosen occupation – occupations that now feel more than ever, like some sort of vocational consolation prize. How is it even remotely fair to ask these people to pay off someone else’s student loans?
Again, I understand that being in debt doesn’t mean you’re lazy, or stupid, or undeserving of sympathy. But how is any of this the taxpayer’s responsibility? What about the hundreds of billions of dollars in endowments, currently in university investment accounts? Why not hold the colleges at least partially responsible? What about the banks and lending institutions that happily gave loans to eighteen-year-old kids with no financial sense, and no clear idea of what they want to do with the rest of their lives? Does it really fall to millions of taxpayers who made other choices, to bail out those who didn’t?
I was encouraged last week, after venting my spleen on this very page, to read comments from hundreds of people with college debt who were embarrassed by the President’s decision to bail them out with taxpayer funds. I’m likewise encouraged by people on both sides of the aisle who see this for what it is – a massive, one time gift to a very specific group of people with a very specific kind of debt. A policy that will do nothing to confront the underlying problems or protect the next generation of students from falling for the same line of bullshit. A policy that makes it crystal clear what sorts of jobs our government values, and what sort of jobs they don’t.
Mike’s Facebook Page
The Babylon Bee: Hard-Working Plumber Looking Forward To Paying For His Neighbor’s Gender Studies Degree