How it all began…

Maybe you were out for a morning jog, like me. Or maybe a bike ride. Or maybe you were walking the dog when you glanced over, saw the water fountain, and recalled the many benefits of good hydration.

Maybe you removed the retainer from your mouth, placed it on top of the fountain, and delighted in the cool refreshment that washed over your dry lips and melted into tongue on its way to your belly, past your soft palate and down your esophagus. Maybe it was one of those moments when you didn’t realize how thirsty you were until you began to drink, and kept on swallowing for ten, fifteen, or twenty seconds. Maybe, when you finally straightened up to continue on your way, you recognized a neighbor and stopped for a chat. Or maybe, you were simply distracted by the raw beauty of another gorgeous morning here in Northern California and paused to wonder just how glorious this place would be if it weren’t run by pimps and thieves who cared about nothing but staying in power. Then again, maybe you’re just a kid, not yet gobsmacked by the wonder of nature, or the hypocrisy of man.

Whoever you are, you left your retainer on the fountain. 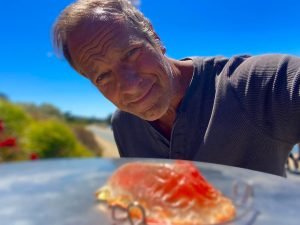 UPDATE: 24 hours later, the retainer is still on the water fountain. It’s the one on the bike trail in Tiburon near the tennis courts. I find it kind of amazing, and possibly hopeful, that no one has touched it. Then again, who would?

Day 3
As The Retainer Turns
It’s getting weird. 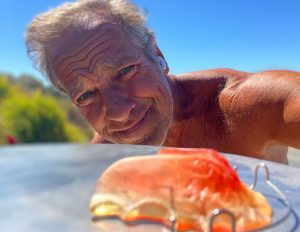 The retainer has been sitting here on the same water fountain for three days in a row. The last 72 hours have been sunny, windy, and beautiful. Lots of people have drunk from this fountain. Hundreds, at least. Maybe thousands. None of them could have missed the sight of this retainer, glowing like a crimson beacon on the top of this stainless-steel fountain. And still, no one has touched it. No one has claimed it. It’s impossible to miss, and yet here it sits, undisturbed by nature or man, solemn as a Sphynx, waiting for its owner to return and jam it back into the mouth to which it has become accustomed.

Day 5
I’ve Got Mail
After yesterday’s video, I was inundated with photos taken by people on the bike path, who wanted to pose with the retainer. I’m not sure what to do with these photos, but I’m hesitant to share 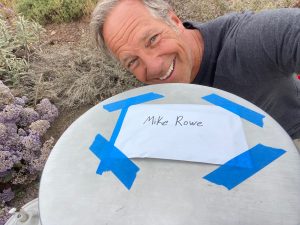 them without a signed release. Not from the individuals in the photos, but rather, from the retainer itself, who is apparently a sentient being who answers to the name of “Tibby Teeth.”
I learned this earlier today, when I jogged past the water fountain where “Tibby” has resided for the last 5 days, and saw that he (or she?) was finally gone. In her, (or his?) place, was an envelope, tapped to the top of the fountain and addressed to me. Inside the envelope was a short note from the retainer, announcing his/her (their?) plans for the “next stage of life.” According to the letter, Tibby – a true mouthpiece, if there ever was one – has gone in search of greener pastures. If the letter is to be believed, you can now follow her/him on Instagram, @TibbyTeeth, where the retainer is currently taking questions and dispensing advice. 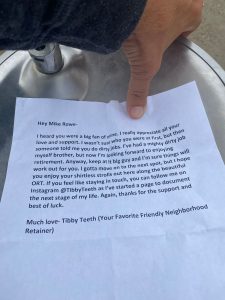