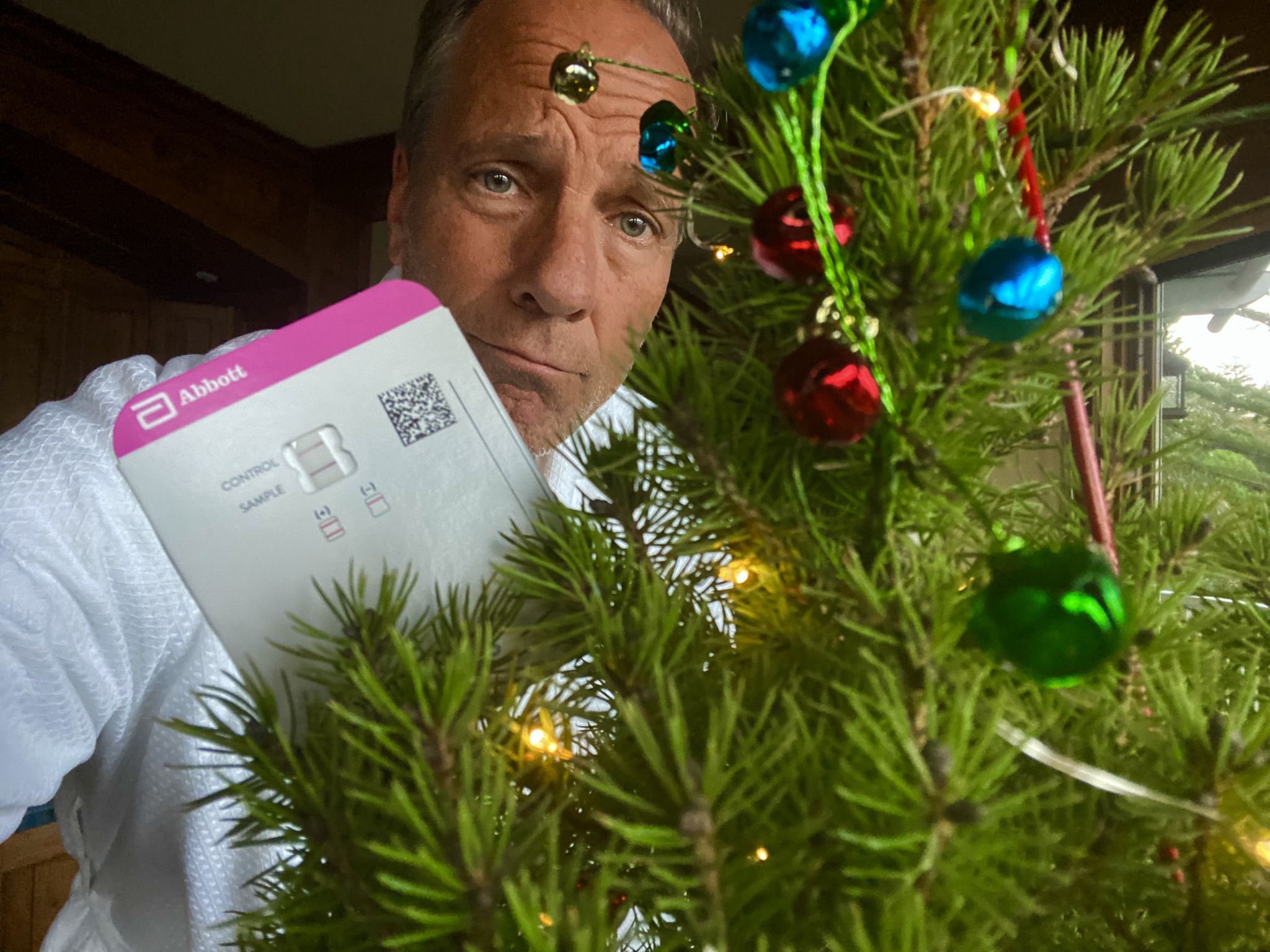 On Christmas Eve, just a few moments before testing positive for COVID, I was thinking about how incredibly lucky I’ve been these last couple years.

My good luck began in March of 2020, with a phone call from the president of Discovery.

“Wow,” I said, “these lockdowns could put a real crimp in your business model.”

“Tell me about it,” said Nancy. “We’ve shut down production everywhere.”

“Well,” I said, “If your desperate, I guess I could host a show from my couch.”

“Would you be up for that?” she asked.

A few weeks later, The Discovery Channel premiered six episodes of the first Zoom TV show, featuring me interviewing the Captains of The Deadliest Catch. (Never before has the title of a show seemed so terribly apropos.)

After that, Facebook took notice and ordered a few virtual episodes of Returning the Favor. The format of that show posed a much bigger challenge, but we figured it out, and managed to deliver 18 new episodes while hunkered in our bunkers. In fact, we won an Emmy for our trouble. At the same time, I expanded my podcast, morphed my speaking business into a series of virtual Fireside Chats, and awarded a million dollars in work ethic scholarships to 134 deserving individuals.

My primary feeling during this incredibly uncertain time was one of gratitude. I was grateful for the technology that allowed me to work during a lockdown, and I was grateful for the chance to keep my people employed when so many other small businesses were unable to do so. But, after four months of at-home broadcasting, the bloom wore off the Zoom, as it were, and I became eager to get back to work. And so, I did. By the summer of 2020, Returning the Favor, Six Degrees, and Dirty Jobs had all resumed production. Obviously, we proceeded with caution, and followed all the COVID guidelines at the time. Funny thing, though. Whenever I posted an update about where I was, the reaction on this page was mixed. Many were pleased to see me back out in the world. But many others were not. Here’s a post from a fan named Darlene Gabon, shortly after I shared some photos from a Dirty Jobs shoot back in July of 2020.

“Mike. Is it really so important to film a television show in the midst of pandemic? Is it responsible of you to encourage this kind of behavior when infection rates are spiking? With so many new cases every day, aren’t you concerned?”

My response to Darlene began with, “Of course I’m concerned, I’m just not petrified.” https://bit.ly/3z0Gk5o. I then went on to explain that I was comfortable working in the age of Covid, because, after a lot of reading and a lot of research, I had come to accept three very simple truths about this disease.

1) COVID will always be with us, in some way, shape or form.

What followed on this page was a spirited debate about the nature of safety and security, the essentiality of all work, and the fragility of trust in our institutions. Thousands participated, and I must have written over 20,000 words in dozens of exchanges like this one. https://bit.ly/3z0Gk5o . I also shared a few paragraphs from C.S Lewis on “How to Live in the Atomic Age,” and asked readers to replace “The Atomic Age” with “The Age of COVID,” to better understand where I was coming from. https://bit.ly/3szhxE0. Well, that made the angry, even angrier.

To my most ardent critics, nothing was persuasive. Any argument that favored a return to normalcy was deemed “premature,” and any reminder of the many unintended consequences of locking down was deemed “reckless.” And that’s when I realized that all my critics had something in common. Aside from their anger, they all believed – sincerely, I think – that COVID could be vanquished. What started as a collective effort to “flatten the curve” and “slow the spread,” had turned into a widely held belief that some combination of government restrictions and behavioral modification would make COVID go away. Or, in the words of our current president, a fervent belief that we could, “shut the virus down.”

Obviously, a breakthrough case was not the Christmas present I was hoping for, but I’m not surprised to get one. I knew this was coming – I just didn’t know when. It is ironic, though. After 18 months of constant air travel, myriad hotel rooms, and countless Uber rides, COVID finally caught up with me in my own zip code, courtesy of a neighbor with a dry cough and a runny nose. Which are pretty much the only symptoms vexing me now. Would it be worse had I not been vaccinated? Probably. From what I’ve read, the vaccines lessen the effects a great deal, but I can’t prove it. All I can say for sure, is that back in 2020, prior to the vaccines, every intrusion into our lives was described as “temporary,” and every shutdown justified by the existence of a “national emergency.”

Fair enough. 2020 was a scary time. Back in those days, people were washing their fruit with bleach, washing their hands round the clock, and being told that masks were a waste of time. Things are very different now. The vaccines, while not the preventative we’d hoped for, seem pretty effective at keeping the infected out of the hospitals. And Omicron is a far cry from Alpha. More infectious, yes, but way less severe. The current seven-day death rate is 2.6 out of 100,000. That’s .00026%, a more than 50% improvement over this week a year ago. https://bit.ly/3mVj4kv Also, we now have access to all sorts of new and very effective therapeutics. In other words, we’re in a much better place than we were in 2020. We’re just not acting like it.

As I type this, universities and school districts are once again closing their doors. Businesses are sending their people home. I just heard the President telling all Americans – even those who are vaccinated and boosted – to keep masking indefinitely – along with schoolchildren! Dr. Fauci now says he supports masks on airplanes “forever.” And the Today Show, which I was supposed to appear on in person next week, just informed me they want to do it on Zoom instead – like it was July of 2020.

Obviously, I’m not a doctor or an expert – I’m just another guy with COVID, sharing some thoughts on the defining issue of the year. And my thoughts are these: We must move forward. We must navigate beyond denial, bargaining, anger, and depression, to accept the simple fact that COVID is here to stay.

That shouldn’t frighten us. It should empower us. It should inspire us to live bravely, but rationally. It should compel us to protect the most vulnerable, while keeping our country open. To do otherwise is to live in the past. A past where we’ve seen over and over again, that “temporary restrictions” are never temporary, and “national emergencies” are never ending. Enough with 2020. Enough with 2021. Here’s to 2022 – a year with less to fear.

PS. It’s impossible in posts like these, to not point out the screamingly obvious. Of course, I’m sad for all those who have lost loved ones to this completely avoidable plague. Their deaths are tragic, and quite possibly, criminal. You have my deepest sympathy. I am also very worried for my elderly parents, my friends in various stages of cancer treatment, the obese, and all those who are immunocompromised. But none of that changes the fact that COVID is here to stay, and life must go on.

PPS. I’ll keep you posted as to how this thing progresses. So far, it feels like a mild cold.

PPPS. Is it gauche to remind you that Dirty Jobs is back with new episodes, 1/2/22, only on Discovery? That’s a Sunday, by the way, at 8pm. If so, never mind. If not, I’ll also mention the premiere is preceded by a 12-hour marathon of me getting dirty, oftentimes behind a mask…