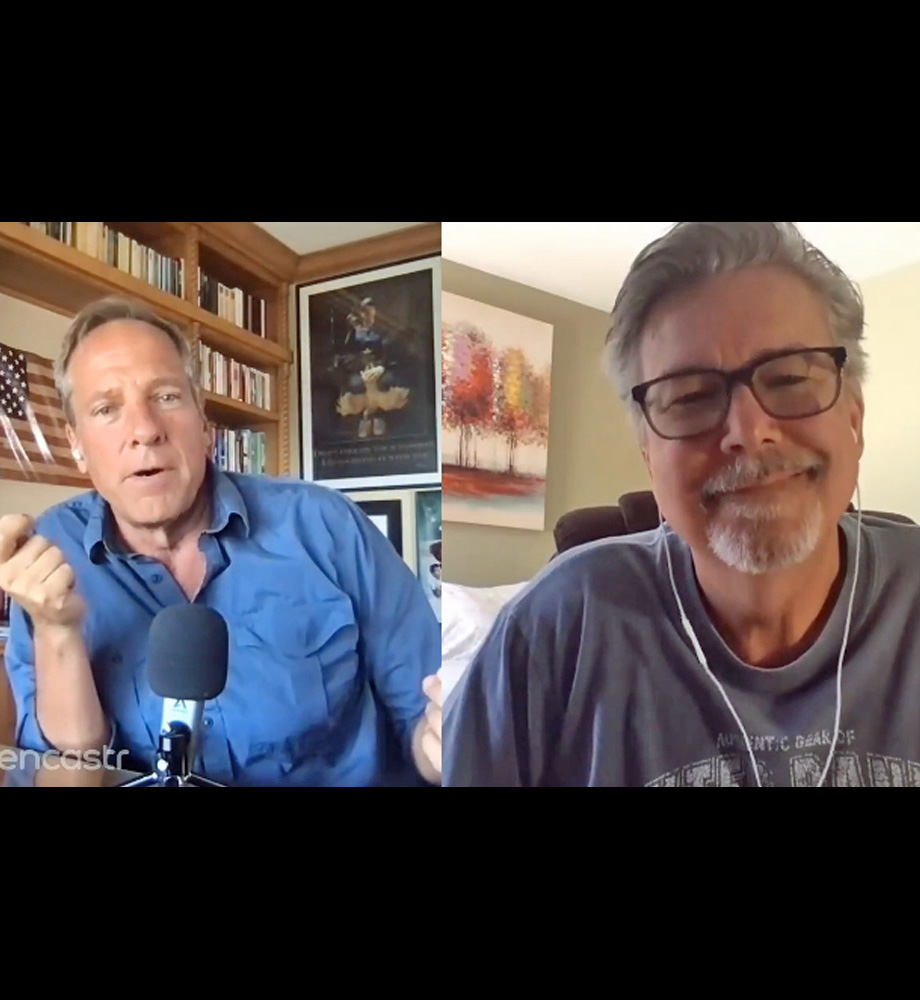 Mike – Your Labor Day response to Tim Johnson is the best thing I’ve ever heard on any podcast, ever. Please consider posting the text as well. Your words need to be shared. Or, in the words of Elbert Hubbard, “cast in deathless bronze, and displayed at every college in the land.” Bravo!

Thanks, Shawn. My original reply is below, along with Tim’s original question. For those of you who wish to listen as they read along, click here. https://bit.ly/TWIHI216 Also, a short video is attached, pulled from the conversation that followed the podcast, with my somewhat nervous producer. Enjoy…

Mike – I love your ideals when it comes to supporting skilled labor. But that flies in the face of your (now obvious) staunch conservatism. The meeting you referenced with Bill Whittle that “may or may not have happened,” was, I assume, a very conservative event, and for some reason, you’re both too ashamed to admit it…. so be it. But how on Earth can you say that you support the working class? Is it all just a show? Conservatism does not support unions. Conservatism is why our wage gaps are where they are today. Conservatism protects corporations.

I’m sorry to have been vague last week about the details of a “meeting that or may not have happened” ten years ago in Los Angeles, but I can assure you, my circumspection had nothing to do with being ashamed of where I was, or who I was with. The event was a luncheon attended by people who share a deep respect for our military, and a steadfast belief that America is still an exceptional country. I have no idea how many conservatives attended versus liberals, but regardless, the event was completely irrelevant to my conversation with Bill Whittle, as well as my charitable efforts to assist those looking for work.

Regarding your views on conservatism, unions, and corporations, I think you’re painting with a very broad brush. I know many conservatives who support unions, and more than a few who belong to one. Likewise, I know many liberals who support large corporations where the wage gap is alive and well. Facebook, Twitter, Amazon, Nike, Delta, Netflix, Google, Apple, United, Disney, The NFL, The NBA, Major League Baseball, Discovery…the entire Fortune 500 is bursting with corporations eager to publicly share their support of liberal values.

As for my personal politics, it’s true that I am attracted to some ideals that are fundamentally conservative, especially on the economic side. But I’m also aligned with many ideals that are classically liberal. For instance, I’m sympathetic to business owners currently struggling to attract quality workers, but I’m also committed to helping workers get the skills they need to succeed. Do you really see this as a contradiction? If so, you’re not alone.

Many people today can’t understand how someone who claims to care about the little guy, refuses to see the big guy as the enemy. Obviously, life is simpler when your enemy is clearly defined, and clearly, you have defined your enemies – conservatives and corporations. But it’s a mistake to assume that the employer is the enemy of the employee. It’s also a mistake to assume that unions are always in the right, or that corporations are always in the wrong, or that conservatives are always in the way of progress. These people are like the contestants on a terrible version of Let’s Make a Deal, where they’re only two doors from which to choose, instead of three. Well, I’m behind door #3, Tim. I’m the guy who sang in the opera for eight years and went on to host a show called Dirty Jobs. That shouldn’t confuse people, but it does. I’m the guy who graduated with a liberal arts degree thirty years ago but criticizes the cost of higher education today. From my conversations, very few Americans align completely with either party. And yet, we’re determined it seems, to put everyone into one camp or the other. That’s what you’ve done to me, and that’s not productive.

This Labor Day, I’m proud to tell you that my foundation has so far awarded over $5 million dollars to 1,400 workers who wish to pursue a skill that doesn’t require a four-year degree, many of them are now making six-figures a year, with no college debt. I’m proud of that. I’m also proud to tell you that a new curriculum based on my S.W.E.A.T Pledge is currently in a pilot program in dozens of technical schools and being developed for home use as well.

The S.W.E.A.T Pledge is a simple document that contains 12 tenets that I believe will improve anyone’s chance of prospering in today’s workforce. S.W.E.A.T stands for Skill & Work Ethic Aren’t Taboo. I wrote it shortly after I launched the foundation in 2008, to articulate the importance of work ethic, personal responsibility, delayed gratification, a positive attitude, a willingness to take initiative, and several other time-honored principles that have, for whatever reason, become controversial here of late. Nevertheless, everyone who applies for a scholarship from my foundation today, is required to sign this document.

To answer your question, Tim, none of this is for show. My support for the skilled trades is real, and so too is my appreciation for all those who work for a living. But I refuse to support the working class by vilifying the people they work for or taking sides in labor disputes. My foundation had no dog in that hunt. Instead, we look for individuals who agree with the principles outlined in my S.W.E.A.T Pledge. When I find such people, we pay for their training. It’s really that simple. I don’t care about their politics, their race, their ethnicity, their gender, or their stance on organized labor. I care about their work ethic, their willingness to learn a skill that’s in demand, and their determination to put those skill to use.

Anyway, I appreciate your question, Tim, and to show my gratitude, I will now read for you, A Message to Garcia, a decidedly non-traditional rumination for Labor Day. This essay was written over a hundred years ago by a self-described socialist named Elbert Hubbard. Well, something transformational must have happened to Mr. Hubbard, because the words I’m about to share do not sound like the words of a socialist. They sound like the words of a frustrated businessman, struggling to find competent help.

As you listen, consider this – A Message to Garcia went viral long before going viral was a thing. It was written in 1899, and ten years later, there were over 40 million copies in print. Some say the number was closer to a hundred million. Either way, Hubbard’s essay was translated into every major language and distributed all over the world. Hollywood turned it into a movie, and the US military distributed it to every recruit. Then, in 1977, decades after it went out of print and was mostly forgotten – my old Scoutmaster read it to the boys in Troop 16, as we listened to his impassioned performance around a campfire.

The story begins with an intrepid Lt. named Andrew Rowan, who was asked by President McKinley to deliver a critical message to the leader of the Cuban insurrection during the Spanish-American war – a General called Garcia. This was a very dangerous undertaking, but in the essay, Hubbard doesn’t dwell on the details of Rowan’s harrowing journey through Cuba. Instead, he uses Rowan’s initiative to bemoan a conspicuous lack of work ethic among the masses. He then begs the reader to consider not just the plight of the employee, but also, the plight of the employer. Like I said, a rather extraordinary plea from a former socialist.

Anyway, thirty years later, when I wrote the SWEAT Pledge, A Message to Garcia was on still on my mind. Because back in 2008, many employers in this country were saying the same thing that Elbert Hubbard was saying a hundred years before – that they couldn’t find employees who could take the initiative. Even at the height of a recession and rising unemployment, millions of good jobs were going unfilled in 2009. Today, 12 years later, the situation appears even worse.

According to the BLS, there are no less than 10.5 million open positions in this job market, most of which don’t require a four-year degree. 10.5 million. And yet, we continue to push college as the best path for the most people. Student debt has now eclipsed 1.7 trillion dollars, employers are struggling to find trained workers with the necessary skills, and our government is literally paying people to stay home. As I was writing my reply to your question, Tim, a headline has appeared on my computer, announcing that a McDonalds in Oregon is hiring 14- and 15-year-old kids at $15 an hour, because no one over 18 is interested! It’s the very thing Elbert Hubbard wrote about in 1899. A general unwillingness to take the initiative, and the endless search for those who do.

Now, is A Message to Garcia is an appropriate thing for me to share on Labor Day? Many will say no, including Chuck, the producer of this podcast. Chuck believes that Labor Day should be reserved for celebrating those who work hard, not for criticizing those who don’t, and he’s concerned that doing so will invite more unflattering comments. He might be right. On the other hand, I’m not so sure the most logical way to celebrate the business of working, is to take the day off. We’ll discuss the matter momentarily when Chuck joins me to evaluate my “performance” of this long forgotten but weirdly relevant rant. In the meantime, this episodes for you, Tim Johnson. A Message to Garcia, brought to life on this the occasion of my foundations 13th birthday, and what I hope for you, is a very happy Labor Day.