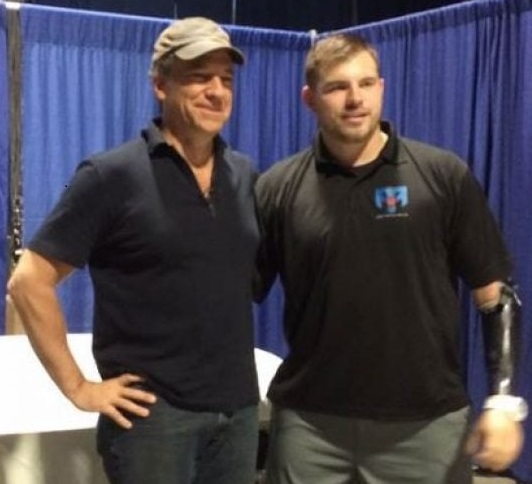 Hey Mike! A lot is going on in Afghanistan right now and Vets feel 20 years lost and heartbroken. Would love to hear your point of view?

My thoughts, first and foremost, are with the men and women who risked everything over there on my behalf.

I’ve been thinking specifically of my friend, Travis Mills – one of the first quadruple amputees to survive his injuries in Afghanistan. I simply can’t imagine what’s going through his mind right now, or how he must feel.

I’m thinking too, of the dozens of other veterans we highlighted on Dirty Jobs, Somebody’s Gotta Do It, and Returning the Favor.

I’m thinking of the 22 vets who kill themselves every day, oftentimes because they don’t believe their sacrifice had any meaning.

And of course, I’m thinking of all the Gold Star families I’ve met over the years – parents and siblings who lost sons and daughters and brothers and sisters for a cause that now seems impossible to define.

It makes me sick to my stomach when I imagine their despair.

None of this is to suggest that I’m not heartbroken by the images coming out of Kabul, or worried for the countless civilians who will surely suffer once again under the Taliban. I am. And, like millions of others, I’m angry and confused by the decision to withdraw in the manner we did. But mostly, to answer your question, Matthew, I’m just trying to put myself in the place of those men and women who volunteered to fight this war, who are now asking themselves the same inevitable question:

The best answer I’ve found so far, is here. https://bit.ly/3gcVqMR From the article, by a former Troop Commander named Don Bentley.

“Like many veterans, I spent the last several days watching the events unfolding in Afghanistan with a clenched stomach. The sight of Taliban flags flying over familiar landmarks was devastating, as was the sight of broken bodies littering the streets, and crowds surging toward overflowing aircraft. I was a junior Army captain on the day passenger planes flew into buildings, changing the world forever. This weekend’s heartbreaking video of Afghans plummeting from departing C-17s was eerily reminiscent of New Yorkers plunging from burning buildings to the backdrop of a beautifully blue sky. But what I’ve seen is not the worst. What I’ve read is: a social-media post from a fellow veteran asking for prayers for his child. A child who’s deploying to Afghanistan to provide stability for the ongoing evacuation. A child who very could well have been born after September 11, 2001. Responsibility for this war has now passed from the first generation to the second. How can this be?

If I were king, the war would have ended ten years ago. Perhaps earlier. Before entropy, or generals without plans, or politicians without convictions, before our nation simply stopped paying attention to those serving overseas on her behalf and allowed our elected leaders to continue sending troops to the land that time forgot in wave after wave. Democracy cannot be imposed nor exported. If a nation’s citizens are not willing to fight, and potentially die, for the right to be free, we cannot and should not bear this burden for them. If the Afghans could not govern themselves after eight years or ten, they certainly couldn’t after 15 or 20. American men and women should not be fighting for Afghanistan’s freedom if Afghans cannot or will not rise up en masse to join them.

Ultimately, this is a question answered in thousands of different ways, or perhaps not at all. Like the war itself, the answer is deeply personal and culled from each service member’s experience. Of battles won and comrades lost. Of years passed and memorials constructed to those who will never have the chance to grow old. Of frozen images and cached feelings. Of spikes of adrenaline and moments of pure terror. Of triumphs and heart-rending losses.

I don’t know anymore. I want to believe that our initial foray into Afghanistan was just. That destroying al-Qaeda and giving the Afghan people the chance to live free was noble and worthy of our highest ideals. But the shadow of the years that followed is impossible to ignore. Years of squandered blood and treasure. Those years drive doubt into the hearts of men.

Which brings us back to the fall of Kabul. While I don’t know if the two decades in Afghanistan were worth the terrible price, I do know this — those of us who answered our nation’s call deserved a better ending. We deserved a resolution without mass executions and bodies falling from planes to the backdrop of a beautiful blue sky. To my fellow veterans, to the quarter of a percent who willingly bore this crushing weight without fanfare or complaint, you are the very best of us. Your sacrifice will not be forgotten.”