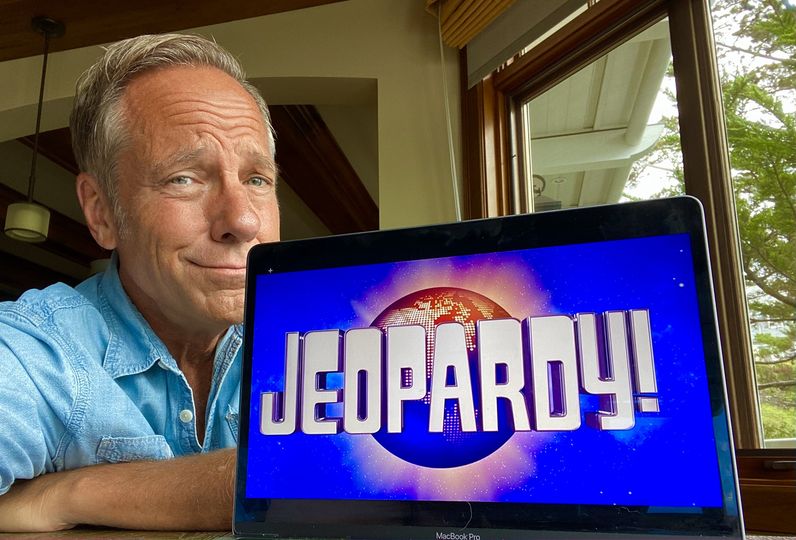 Question: Hey Mike – What are the odds that you will become the next host of JEOPARDY!

Let me first say that I’ve watched JEOPARDY! all my life. I’m a big fan of the format, and I’ve been sincerely flattered by the many people on this page who have encouraged me to audition for Alex Trebek’s old job. And, modesty aside, I think I could do a pretty good job behind the podium. Unfortunately, I’ve done some things in the past that would preclude me from doing so. You see, Tom, many years ago, when I was just starting out in this business, I took a solemn vow to never host a TV show with an exclamation point in the title. And clearly, hosting JEOPARDY! would violate that oath.

It may seem like a small thing, but a man must have his standards, and when it comes to establishing trust with your viewers, punctuation matters. F. Scott Fitzgerald said that using exclamation points is like laughing at your own jokes – after a while, your readers will simply ignore them, or worse, become annoyed by them. I’m afraid Fitzgerald was right. Exclamation points, especially in conjunction with upper-case letters, create a level of urgency that should only be used to impart the very highest levels of risk. But where is the risk in appearing on JEOPARDY!? What exactly happens if you give an incorrect answer? Do you get punched in the face? Scalded with hot water? Do you lose a finger? No. Nothing of the sort. You’re not even risking your own money.

Again, I’ve always limited myself to hosting shows with titles that accurately reflect the content therein, and in this regard, I believe my resume speaks for itself. No Relation, for instance, a game show I hosted once upon a time, required celebrity judges to determine which family member was pretending to be related to the others. Thus, No Relation is an honest title.

Likewise, Dirty Jobs is a show about jobs that are…dirty.

Deadliest Catch is a show about fisherman who work in conditions that are…deadly.

Somebody’s Gotta Do It is a show about people who do things that…gotta be done.

Returning the Favor is a show where favors are… returned.

How the Universe Works is a show that explains…wait for it…how the universe works.

JEOPARDY! on the other hand is an epistemological box of chocolates – a very measured, very dignified, and completely harmless celebration of knowledge where no one is ever in danger, or anything close to it. And don’t even get me started on DOUBLE JEOPARDY!

I’m sorry, Tom, but our country today is suffering from a profound lack of trust in our public institutions. Today, more than ever, we need our journalists, our politicians, our scientists, and most importantly, our game show hosts, to tell us the truth. Unless the producers of JEOPARDY! are prepared to inject some actual risk into the gameplay, along with some real-world consequences for losing, there’s just no way I could associate myself with a program so fundamentally at odds with its own name. Especially one with an exclamation point.

P.S. In the spirit of compromise, I would probably accept the job if the producers agreed to put the title in lowercase letters, and replace the exclamation point with an interrobang. (in-TERO-bang.)

As you probably know, Tom, the interrobang is a punctuation mark that evokes an equal measure of curiosity and surprise. It’s the love child of a question mark and an exclamation point, and it looks like this:

The interrobang was conceptualized by Martin K. Speckter in 1962. The former head of an advertising agency, Speckter wanted to give his copywriters a better way to express themselves. After creating the character, he solicited the public for names, and considered the following suggestions – exclamaquest, QuizDing, and exclarotive. Ultimately, Speckter settled on “interrobang,” with a nod to the Latin, “interrogatio,” for question, and “bang,” which is printers’ slang for an exclamation point.

Replacing the exclamation point in JEOPARDY! with an interrobang, while easing up on the ALL CAPS, would give the title of the show a measure of irony and modesty, instead of the manufactured urgency currently there. It would be a bit like putting a winking emoji after a DANGER sign. Thus, the interrobang would induce the same mix of curiosity and surprise into the title of this beloved show, that the game itself aspires to impart with every question answered, or in this case, every answer questioned.

In this way, JEOPARDY! would become, Jeopardy‽

Now, that’s a title I could get behind!!!

PPS. It should also be noted that I have not yet auditioned, because no one at Sony has asked me to.