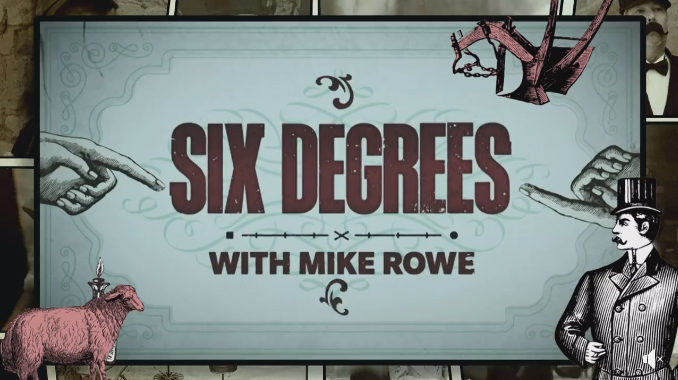 Jeremy Flannery writes…
“Just finished the first episode of your show Six Degrees with Mike Rowe. I just want to say what an awesome idea for a show. I held onto every degree that was presented. Very cool!”

Hi Jeremy – Glad you liked it! I just watched it myself, and modesty aside, I forgot how good it was. We started filming last summer, and finished this summer, at the height of the lockdowns. Good times!

For the uninitiated, Six Degrees is a history show for people who normally don’t watch history shows. At base, I travel through time on a budget, connecting two seemingly disperate objects. It was inspired by the parlor game, Six Degrees of Kevin Bacon, (except Kevin wasn’t available, so they went with me.) It’s also another excuse for me to hire my old buddy Chuck, who does a fine job of upstaging me on various occasions. The trailer does a good job of capturing the tenor and tone of the show.

As for Discovery +, it’s a new streaming service that allows people to watch Discovery programming whenever they feel like it. With light ads, it’s $4.99 a month, BUT, there’s a free trial period, so if you just want to check out Six Degrees it won’t cost you a penny. On the other hand, there’s a TON of good stuff on the platform, including a big chunk of classic documentaries. Planet Earth, Blue Planet, and so forth. That stuff really looks amazing. Attenborough has a new one called Perfect Planet, which is gorgeous. https://www.discoveryplus.com/?soc=discovery_facebook
Let me know what you all think of the show. If you dig it, we’ll do some more…
Mike