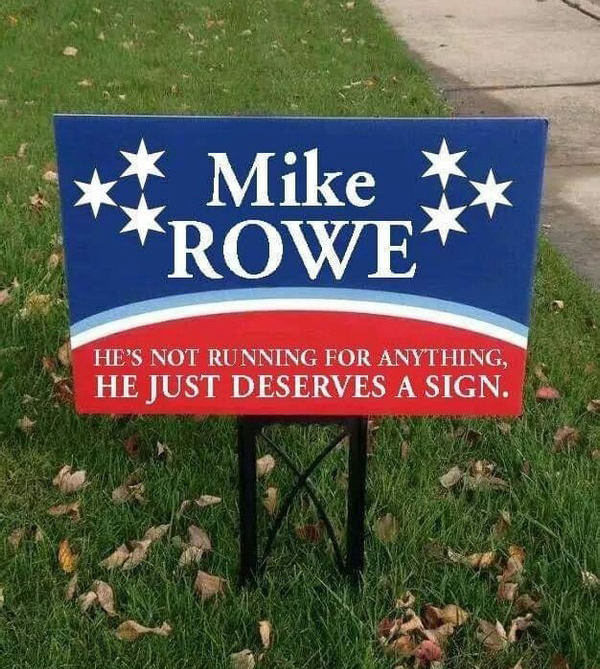 Mike – By my count, there are over a dozen Facebook pages called “Mike Rowe for President.” A new one pops up every few weeks. Here’s one with over 9,000 members. https://bit.ly/34lF2TF

Can’t you take a hint? Every time you post – regardless of the topic – hundreds of people respond with “Mike Rowe for President!” Seriously man, what are you waiting for? You could win in 2024…

You might be right. Running for President would probably be fun, and I suppose it’s possible I could win.

Obviously, a lot of people are uncomfortable with the current options. So uncomfortable, that they’d nominate a guy who got marginally famous for crawling through sewers. I get it, and I’m flattered. But really, I’d be a TERRIBLE politician. Not because I don’t love our country – I do. But because I’m not interested in the welfare of groups, and right now, our country feels like a collection of groups. Specifically, groups defined by race, gender, sexuality, ethnicity, and all sorts of other things beyond the individual’s ability to control. I have no interest in winning the approval of these groups, or in helping one group at the expense of another. I’m interested in helping individuals. Specifically, those individuals who impress me with a mix of work ethic, attitude, personal responsibility, and a willingness to learn a skill that’s in demand. That’s why I run a foundation that rewards individuals with those qualities. I know how to do that. I do not know how to return our country to the melting pot we’re supposed to be.

On the other hand, I’ve lived long enough to never say never. Had you asked me fifteen years to start a foundation to help train the next generation of skilled workers, I’d have passed for a whole other list of reasons. So, you never know. I will say though, that if those 9,000 members over at https://bit.ly/34lF2TF, were closer to a million, I’d likely be able to parlay that into something useful. Not a run for office, necessarily, but a platform to take mikeroweWORKS to the next level.

Think about it. If I had a million people on a Facebook page encouraging me to run for elected office, I suspect the MSM would come looking for comment every single day. And that would allow me to talk about mikeroweWORKS… Every. Single. Day. And that, might very well lead the push to get shop class back into a high schools. Which, in my opinion, would be the best thing I could hope to do for my country.

Anyway, Andrew, that’s a long way of saying, ask me again when this page has a million members. https://bit.ly/34lF2TF Till then, I refer you to the sign below, which appeared on my wall this morning, and made me snort…