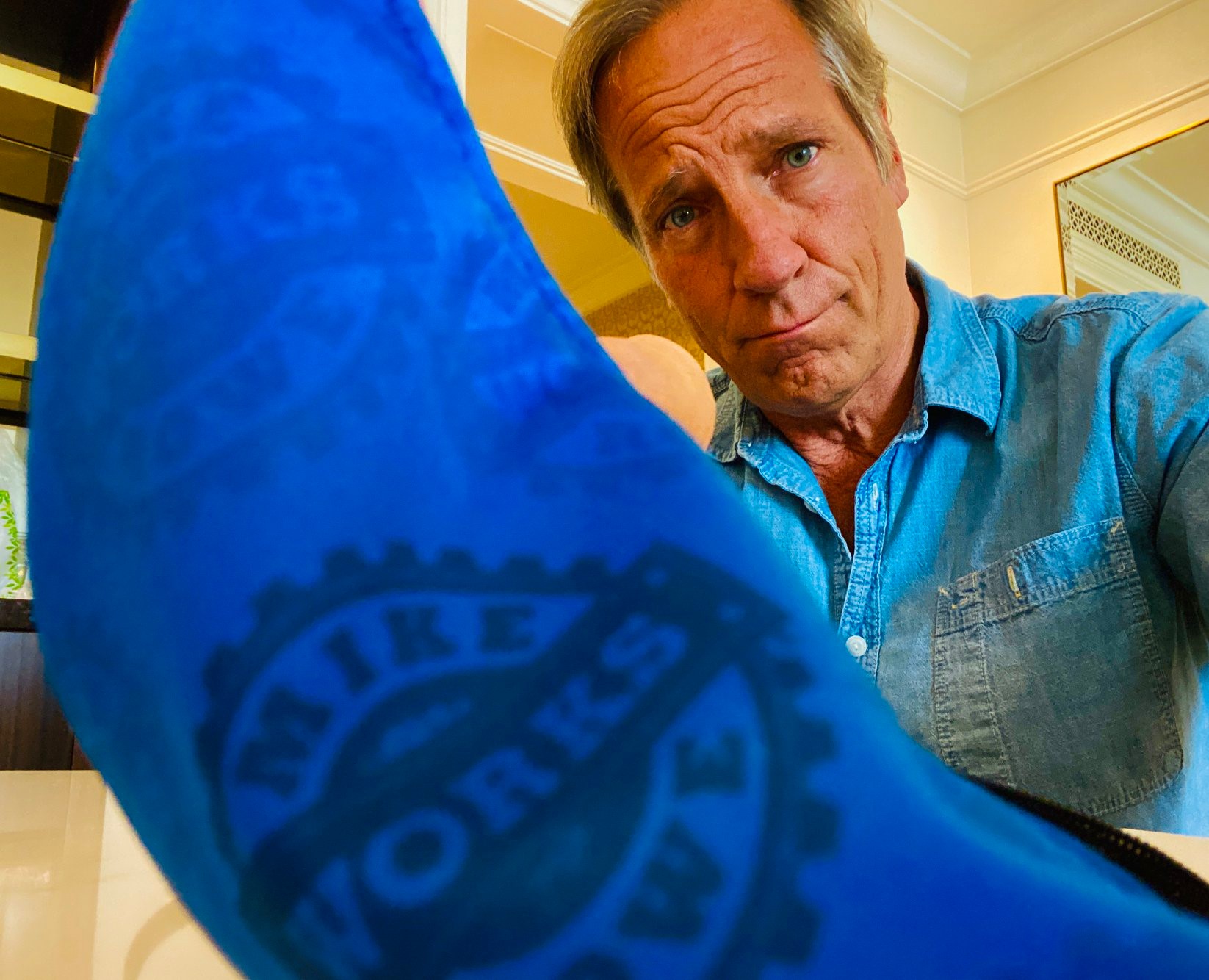 Mike. In a recent post, you said you’ve been to Tennessee and Georgia, giving speeches and filming for your new show. Before that, you were on the road shooting for Dirty Jobs. Is it really so important to film a television show in the midst of pandemic? Is it responsible of you to encourage this kind of behavior when infection rates are spiking? Don’t you watch the news? More and more cases every day – aren’t you concerned? Darlene Gabon

On March 15th, the day after my part of the country was locked down, I posted a link to an interview with Dr. Michael Osterholm. I’m posting it again, because I believe you and everyone else in the country would benefit from listening carefully to what he has to say. https://youtu.be/E3URhJx0NSw

Dr. Osterholm is the Director of Infectious Disease Research and Policy. This is the same epidemiologist who ten years ago, predicted a coronavirus would come from China and turn our country upside down. In his book “Deadliest Enemies,” he described the utterly irresponsible way in which the media would report on the situation, the completely opportunistic and shamelessly political way our leaders would likely react, and the unprecedented chaos and confusion that would arise from all the mixed messages from the medical community. His resume is unexampled, and his analysis of the situation is the most logical and persuasive of any I’d heard so far. He’s also the only expert I know of who hasn’t walked back his numbers, reconsidered his position, or moved the goalposts with regard to what we must do, what we can do, and what he expects to happen next. I say all of this because Dr. Osterholm also predicted that we could easily see 100 million COVID cases in this country, with a very strong possibility of 480,000 fatalities – even if we successfully “flattened the curve.”

It took me a few weeks to accept this scenario, because 480,000 fatalities is a frightening number, and lot of other experts were saying lots of conflicting things. But eventually, I came to the conclusion that Dr. Osterholm was probably correct, and quickly navigated the four stages of grief that usually precede acceptance – denial, anger, bargaining, and depression. By late April, I had come to accept Dr. Osterholm’s predictions as a matter of fact. Since then, I’ve had three full months to come to terms with the fact that, a) I am probably going to get COVID-19 at some point, b), I am almost certainly going to survive it, and c), I might very well give it to someone else.

I hope that doesn’t sound blasé, or glib, or fatalistic, or selfish. Four-hundred eighty thousand deaths is an obvious tragedy, and I’m deeply sympathetic to all who have been impacted thus far. I’m also very concerned for my parents, and everyone else in a high risk category. But when Dr. Osterholm says that COVID can be slowed, but not stopped, I believe him. When he says a vaccine will not necessarily hasten herd immunity, I believe him. And when he says that “flattening the curve” and eliminating the virus have nothing to do with each other, I believe him.

Thus, for the last three months, I’ve been operating from the assumption that this is a year-round virus that’s eventually going to infect 100,000 million people and kill roughly 1/2 of one percent of those infected. I’ve gotten used to those numbers in much the same way I’ve gotten used to the fact that 40,000 people will likely die on the highways this year. That’s why I’m not panicked or surprised by tens of thousands of daily COVID cases; I’ve been expecting them. Unfortunately, many others have not. Every day, millions of people watch the same breathless coverage by the same breathless journalists, who seem determined to do all they can to foster uncertainty. And so, millions of people are still paralyzed by fear, because they haven’t been given a chance to digest the truth, (or, what I believe to be the truth.) Fact is, we can accept almost anything, if we’re given the facts, and enough time to get our heads around them. But if we don’t have an understanding of what’s really happening, we simply can’t get passed denial and bargaining, where so many seem to be stuck, understandably so.

Imagine for a moment you had no idea how many people would die in car accidents this year. Now, imagine that every single accident – over six million a year in the US alone – were reported on the same way that every new COVID case is reported today. Imagine every day you were told in hysterical tones, that another 16,000 accidents had occurred, resulting in another 90 deaths per day. What would that do to your willingness to drive? Six million accidents is a lot of accidents, and 40,000 annual fatalities is a lot of death – especially if you don’t know how high that number could get. But we DO know the dangers of driving, and we’ve accepted those numbers. Consequently, we’re able to make a grown-up decision about whether or not we want to assume the associated risk of operating a motor vehicle.

Again, don’t misunderstand. I’m not ignoring COVID, and I’m not pretending the risks at hand aren’t real. I don’t want to get this disease and give it to someone else, any more than I want to be in a car wreck and hurt someone else. So, I take precautions. I get tested often. If I can’t distance, I wear a mask – especially around higher risk people. I also wear a seatbelt, obey the speed limits, and check my mirrors before changing lanes. I’m aware that we’d all be a lot safer if we kept our cars in the garage. I’m also aware we’d be a lot safer if we all kept ourselves in the house. But that’s not why cars, or people, exist.

Anyway Darlene, that’s a long way of saying that I have accepted Dr. Osterholm’s numbers, and now, after three months of acceptance, I’ve made a decision on how I wish to live my life. Sooner or later, you will too. We all will.