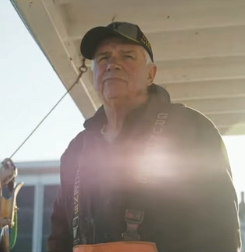 Funny how things work out. A few years ago, I posted a ridiculous video on this page called “Mike Rowe My Life,” wherein I narrated the doomed efforts of a Mid-western family who attempted to photograph themselves after way too much eggnog. http://bit.ly/34I5DIq

That video has now led to a full-on marketing campaign by Caterpillar. Here’s how it works. Once a month, Cat sends me a sixty second video highlighting one of their hardest working customers. I write the copy, and then, usually after a beer, narrate the action in a style best described as “over-the-top.” (Think Bud Light’s, “Real Men of Genius,” meets “Deadliest Catch,” with a dose of every movie trailer you’ve ever seen.)

These short videos, like the one below, lead to a slightly longer profile of the subject, and those are even better. The first is about a crab fisherman in the Chesapeake Bay named Windy Karpavage. (That’s right, Windy.) I think it’s awesome, though the crabs are slightly smaller than those in the Bering Sea…