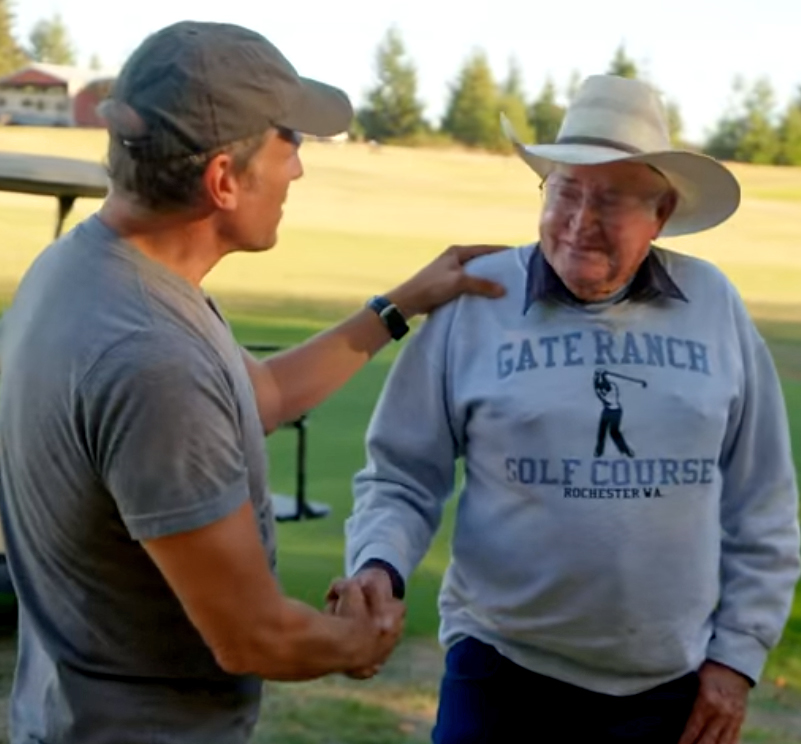 Well, shit.
My old friend Bill Dunson has died.
He was 90.

I don’t use the word “friend” lightly, and to be honest, I only spent one day with the man. But Bill was one of those people who becomes your friend the moment you meet. It’s really not up to you. Bill possessed a quality that demanded friendship. He exuded generosity and familiarity. He dripped with empathy, and authenticity. Mostly though, he just made you feel as though you had known him forever.

I met Bill during an episode of Returning the Favor. Sarah, my producer, told me on the ride in, “Mike, you’re going to love this man. I know this because I love this man. And I have no idea why.”

Sarah was right. I met him next to a sign on his golf course that said, “Foul language will not be tolerated.” Moments later, he told me a joke that would make a sailor blush, and I laughed so hard I had a coughing fit.

The Gate Ranch Golf Course was the reason Sarah introduced us. Bill and his younger brother, Jim, had built the course in their back pasture. It’s a beautiful course. Neither brother was a great golfer, but they both loved the game, and made their course a free attraction to the people of Rochester, Washington. For that, and for other reasons, they were beloved by their community.

Bill and Jim had a construction company together. They worked together most of their lives, and lived together as Jim fought pancreatic cancer. Jim died a year before Bill and I met. I think Bill was still grieving when we met, but even in grief, he spread sunshine and humor with every word. Even the ones his sign forbade.

If you haven’t seen the twenty-minute episode we shot with Bill, it’s attached. You should watch it. You’ll feel better about our species. If you don’t have twenty-minutes, I’ve here’s a four-minute sample of what made Bill special. http://bit.ly/2CKYnjz

And if you don’t have time for that – just know this:

Certain people were born to sit on the porch and tell stories and drink lemon-aid and be wise and funny in their old age. Bill was one of those people. He’s gone now, but he won’t be forgotten anytime soon. My sympathies to his family, and to the people of Rochester, who are no doubt missing him today. His life was a great gift, and we were honored to share it with so many.

Bill Dunson was the only guy to ever make me consider playing a round of golf. I’m going to do that, one day soon, and when I do, I’ll pause on the 8th hole, and make a toast to him and his brother.

I’m glad we were friends.