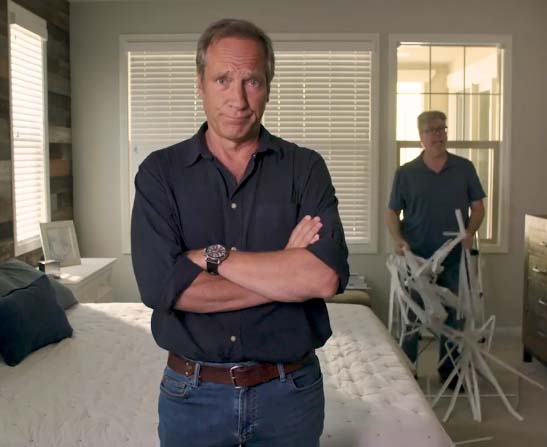 I’m loving these commercials with your buddy Chuck. What’s the Homeshow exactly? And whose idea was “Don’t Chuck It Up?” Genius!
Tina Murphy

Well Tina, in the words of Mark Twain, there’s no limit to how far a man can go if he doesn’t care who gets the credit. But since I’ve already gone as far as I can, I’ll take credit for “Don’t Chuck It Up,” (and the blame.)

Aside from working with mikeroweWORKS for the last several years, Chuck has made many scheduled and unscheduled appearances in just about every project I’ve worked on since high school. I’ve attached a few outtakes from our recent partnership with Marketplace Events, who produces dozens of Homeshows all over the country.

If you haven’t been to a Homeshow, they’re fun. Hundreds of experts and exhibitors all under one giant roof, usually for a weekend, talking with homeowners about every imaginable topic. They’re supporting my foundation in a number of ways, for which I’m grateful, and I’ll be popping up at several of their events over the next year, including a big one in Minneapolis, where some sort of sweepstakes is unfolding. More on that later.

For now, go here to see where the Homeshow nearest you will be.