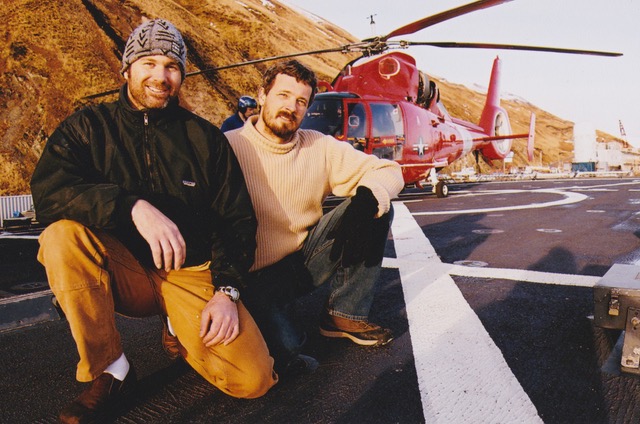 I just had a phone call with my old friend, Todd Stanley. If you don’t know Todd, it’s likely you’ve seen his work. He and his brother, Doug, (on the right,) were the first cameramen to sign on to Deadliest Catch – a show I’ve had the honor of narrating for the last 15 years.

Todd was on The Cornelia Marie, and there with Phil Harris when he died. Doug went up to the Bering Sea with a tiny crew way back in 2001, and captured the footage for a mini-series called Deadliest Season, which led to the series many of you know today. Not only did Doug and Todd film on the crab boats, (proving it could be done, to the disbelief of many,) they went native more than once – sticking around after the filming ended to work as a crabber. In ways I’ve never seen before or since, Doug Stanley earned the respect of men who are very stingy with their respect, and reset the boundaries for filming in high risk environments. Anyway, I was saddened to learn from Todd that Doug was nearly killed a few days ago when a drunk driver hit his motorcycle head on. https://bit.ly/2kMA3Z4

Doug is currently in a coma, and has no idea a Go Fund Me page has been set up in his name. It’s not the kind of thing he would ever approve of or ask for, but there is really no alternative. Doug’s injuries are severe – massive internal bleeding, a shattered pelvis, and a long road to something resembling recovery. His medical bills will be enormous, and his family needs help. I’m bringing their situation to your attention because I know that many on this page appreciate the show he helped make possible. If you’d like to help out, here’s the place to go. https://bit.ly/2khDyqh

Regarding Doug’s family, he has two sons, Rex and Jett. Jett was on the bike with his Dad when they were struck. He too, was injured, but not severely. Jett’s mother, Rhea, is someone that some of you might recall as well. Rhea is an old friend who did the audio on several of the early episodes of Dirty Jobs. My thoughts are with them all, and I know they’d be grateful to know that yours are too, regardless of your ability to help financially.

Either way, Doug Stanley is a genuine tough guy – one of the toughest I’ve ever met. But we’re a fragile species, and sooner or later, we all need help. Doug can’t ask for it, so I am. Feel free to share.