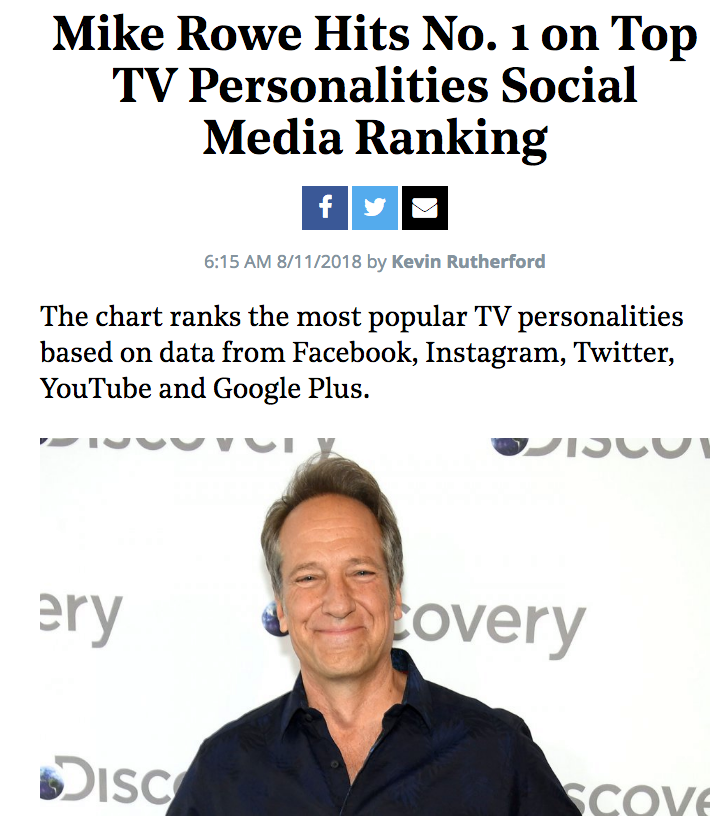 To The Hollywood Reporter

Thanks to some vigilant fans on Facebook, I’ve been made aware of my #1 position on this week’s “Top TV Personalities Social Media Ranking!” https://bit.ly/2nvMKFx I just wanted to take a moment and thank you for the honor, sincerely, and offer one small clarification – if I may. I no longer work for CNN.

Apparently, you guys have an old photo on file that features me standing in front of one of those ubiquitous backdrops covered with CNN’s logo. I noticed that you’ve used this several times in the past, but I’ve hesitated to say anything for fear of sounding ungrateful, or worse, pedagogic.

For the record, I did in fact, produce a show for CNN several years ago called “Somebody’s Gotta Do It.” The show did well when it aired, but thanks to natural disasters, terrorist attacks, racial unrest, and the most contentious election in a long time, it was constantly pre-empted by all the trouble in the world. Now it’s found a new home on TBN, which I appreciate you mentioning. 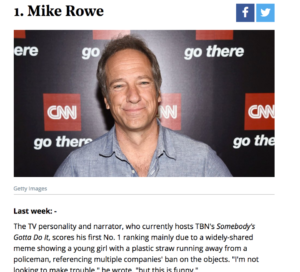 Again – not a big deal. Besides, I don’t have any photos of me standing in front of a TBN backdrop, and even if I did, who really cares about the logo next to which my face is juxtaposed? God knows, the Internet is already a hot mess of pedantry, and I have no interest in joining the army of punctilious and sententious correctors determined to comment on all things inconsequential. I really just wanted to thank you for the mention, and correct the implication that I still have a show on CNN.

For the record, Dirty Jobs went out of production back in 2012. That’s not to say I’m opposed to the idea slipping back into my hip boots – Dirty Jobs 2.0 is an interesting notion, and truth be told – the idea is being floated around. But as of yet, I’m afraid it’s just a notion. So the Discovery logo, (while still near and dear to me,) is probably not the most accurate representation for the headline in question. If I may be so bold, I’d like to point out the show that’s currently occupying my time – a new program on Facebook called Returning The Favor. 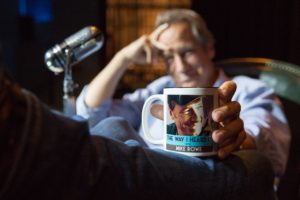 As you may or may not know, RTF is entering its third season, and according those who claim to know, kind of a big deal. In each episode, we highlight a real person doing something good in their community, and surprise them with a reward of some kind. With something north of 250 million views, and a collection of loyal fans who now program the entire show, business is brisk. (Got an idea? Drop me a line at right here! We’re always looking!) Unfortunately, I don’t have any pictures of me standing in front of a backdrop covered with Facebook logos. However, I do have a photo of my face on a coffee mug, along with the logo for my podcast “The Way I Heard It with Mike Rowe” – another project I’d love to bring to your attention.

The Way I Heard It is a collection of eight minute mysteries for the curious mind with a short attention span, currently available wherever podcasts are listened to, including mikerowe.com/podcast. It too, (according to people who claim to know,) is kind of a big deal, with over a hundred and fifty million impressions so far. This month, I’ve begun the process of converting the audio library into a video format, which is proving to be a lot of fun. Feel free to use the attached image, should the need arise.

PPS. One more thing…As you may or may not know, I run a modest foundation called mikeroweWORKS. Among other things, we award work ethic scholarships to people who wish to improve their lives by mastering a skilled trade. This Labor Day, we’ll celebrate our tenth year, and just a few days ago, we awarded $600,000 to 182 applicants, bringing our total scholarship disbursement to more than $5 million so far. Again – modest by foundation standards, but we’re proud of what we’ve accomplished in helping close America’s skills gap. So I’ve included an image of the mikeroweWORKS logo for your consideration, alongside my enormous noggin. Should I ever find myself lucky enough to crack the Top 10 somewhere down the line, this is probably the safest image to use, since mikeroweWORKS has been the only thing I’ve done with anything approaching consistency, and the only project not conceived for the purpose of filling my own coffers. 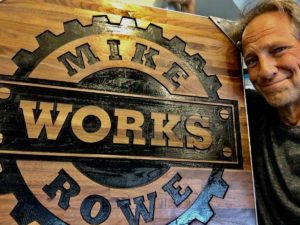 PPPS. Full disclosure – For a moment there, I thought my #1 position on this week’s list might have been the result of the post that announced the winners of our most recent work ethic scholarship program. Instead, I learned in your article that my ascent to the top position was triggered by a meme I posted of a little girl with a plastic straw running from a cop. Apparently, the image was shared nearly 250,000 times, proving once again you never really know what people will spark to.

Anyway, I’ve posted that photo as well, and wouldn’t mind one bit if you photo-shopped my head onto the shoulders of the little girl and used that image as the go-to-photo for all things Mike Rowe related moving forward. Seriously. It’s already funny, but the isolated image of the my head on the body of a little girl running from the cops with illegal contraband is perhaps the best summation of my misspent career to date, not to mention a truly worthwhile use of photoshop. Just a thought…