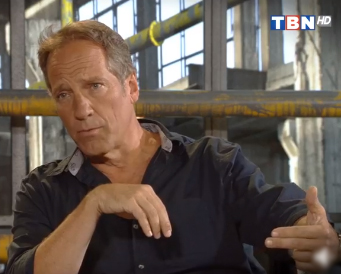 Jeff Parks says… “Mike, you’re being used as a pawn to sell this current administration. These Christian networks are QVC for Trump. You know this is true.”

Hi Jeff. Thanks for your feedback. I appreciate it. Couple points.

1. You sound very certain about your beliefs. I get it. It’s good to feel certain. But just because you sound certain or feel certain doesn’t make you right.

2. How exactly, am I being used to “sell this current administration.” Watch the attached interview. You’ll find no mention of Trump whatsoever. In fact, the only time the word “Politics” is used, is when I say “I don’t want to get political.” True – I was asked what I’d do if I were King, and whether or not I’d like to be the Secretary of Education. But there was no talk about this administration or any other.

3. I have no idea what percentage of the TBN audience supports the current president. I think it’s fair to say a majority are conservative, but that doesn’t mean they carry water for Trump. But regardless – even if they did – why should I care? The country is clearly divided, but does that mean I’m only allowed to talk to half? I run a foundation that awards work ethic scholarships, and I produce TV shows that I want people to watch. All people. Consequently, I’ll put the programs I produce on any channel that wants them.

4. While I value your opinion, you overreach when you tell me what “I know to be true,” versus what you believe to be true. You have no way of knowing what I know and what I don’t know. Asserting otherwise is unpersuasive.

Jeff Tibeau says…Pff…A huge part of our population prefers to keep their head in the sand about what is really happening in America, and you have figured out a way to profit off one of the only things that tugs at their heart strings.

Hi Jeff. Thanks for your feedback. I appreciate it. Couple points.

1. In my opinion, a huge part of our population is not only informed about what’s happening in America, they’re sick of hearing about it 24/7. They’re tired of grandstanding journalists and elected officials whose only priority is to remain in power. They’re tired of comments in their newsfeeds from friends and coworkers who assume that everyone in the country who disagrees with their view of the world is an idiot. They’re tired being shown over and over what makes us different, and desperate to be reminded of that which unites us. I also understand that many are skeptical of religion, and suspicious of anything that resembles televangelism. I get it. The world is full of hypocrisy and opportunism, and religion is hardly immune. But that doesn’t change the fact that a huge part of our population wants to see something that reaffirms the existence of decency. Modesty aside, SGDI does that. Regardless of where it airs.

2. You’re correct – I’ve profited from producing content that makes people feel better about the country and the species. Is that a problem for you? If so, why? What types of programs would you prefer I make, and where exactly would you have me air them?

Mike Ferguson opines…”You have lost me, sorry. I am not interested in your or anyone’s religion. I always appreciated your views and posts on the need to provide workable and valuable skills to our populace. Now you have sold your soul to a religious establishment.”

Hi Mike. Thanks for your feedback. I appreciate it. Couple points.

1. If you’re not interested in the opinions of others, why do you suppose anyone would be interested in yours? I’m not saying I don’t care what you think – I’m just saying it’s a curious strategy to announce your general indifference to the beliefs of others, and then proclaim to the world how you feel.

2. When have I ever publicly discussed my religion, and how exactly have I “sold my soul?” Do you really believe that people who watch TBN should not have access to the same show that aired for years on CNN? If so, why? I’m happy to respond to an actual argument, but you’ll need to make one first.

‎Jane Lew‎ says…”You’ve chosen your audience, Mike and it excludes and offends me. Ultimately, it has to be about money which contradicts your content. Your choice of network contradicts the inclusiveness of your content as well. I hope your short-sighted decision has a huge payout. If not, you are just moronic.”

Hi Jane. Thanks for your feedback. I appreciate it. Couple points.

1. If appearing on TBN means I’ve “chosen my audience,” so be it. But you should know that I’ve also appeared on CNN, FOX, MSNBC, History, Discovery, National Geographic, Science Channel, Animal Planet, Destination America, PBS, NPR, ABC, CBS, NBC, and over a hundred different radio stations. In other words, if I have “chosen my audience,” I’ve picked a much larger one than you’ve given me credit for.

2. I understand that my presence on TBN has left you feeling excluded and offended. I’m sorry to hear that. Obviously, if my appearance there leaves you feeling excluded, I’d encourage you watch something else. But I’d also encourage you to consider the possibility that the decision to be offended is exactly that – a decision. Obviously, there are many people on this page who don’t care to watch all of the various networks I’ve appeared on. But only a few of them seem determined to announce their displeasure publicly. Why do you suppose that is?

3. I’m confused by your comments regarding money. Like all content on all commercial television, SGDI exists for the purpose of making money. There are other objectives, obviously, but the show would not exist if it didn’t make a profit for the producers, the advertisers, and whatever network airs it. That’s just how the business works.

4. I’m afraid I don’t understand how TBN contradicts the “inclusiveness” of SGDI. A networks identity is a reflection of the programs it chooses to air. If TBN had an issue with the kinds of people included on SGDI, they wouldn’t put the show on the air. And if I demanded every network I do business with comport with my personal view of the world, I’d be broadcasting only to myself. Or as they say in the chapel, preaching to the choir…

And really – where’s the fun in that?