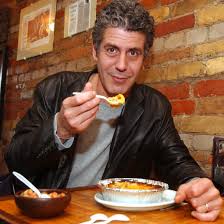 On a hot night in 2005, after a long day of spelunking through the septic tanks of Wisconsin, I retired to my suite at the Motel 6, to wallow in the perks of my chosen profession.

First, there was the tepid shower, followed by another. Then, there was the tepid beer, followed by another. Then, I logged into the Dirty Jobs Mudroom, where I planned to chat with fans of my show while watching myself on television, (a narcissistic but mostly harmless habit that eventually got out of control and turned into this Facebook page.) But that’s another story.

On this particular evening, stretched out on a suspicious comforter held together with the DNA of previous guests, I stumbled across a smart-aleck on The Travel Channel eating fermented shark meat in Iceland, and telling his producer he’d be dead by morning. I had to laugh. Just a few hours earlier, I had been eating a fermented hoagie in an open sewer and lodging a similar prediction with my own producer.

Naturally, I was intrigued by what appeared to be a kindred spirit, Forrest-Gumping his way around the world, pushing the bounds of non-fiction television. The show was called “No Reservations,” and no – I didn’t think it was better than Dirty Jobs. But I did think it was every bit as good, and the more I watched, the more I grew to appreciate this subversive chef’s naked contempt for all the fakery of traditional production. I loved the way he went out of his way be seen as a “traveler,” not a tourist. It reminded me of my own attempts to be seen as a “guest,” and not a host.

From that moment, I was a fan. I read his books and enjoyed them all. But what I enjoyed even more was the way Tony pushed The Travel Channel into some very uncomfortable territory. It’s not that I think bad language and drinking on camera are cool or edgy; I don’t. But I loved the fact that Tony pushed the network to let the show evolve around his point of view, and his personality. In those days, that almost never happened. It’s still very rare, mostly because the shows are the property of the network, and the network almost always has an opinion about how their hosts should and shouldn’t behave. But Bourdain was his own man – a man on a mission to produce a show that was authentic to him. I admired that. I also admired the way he pushed back when his name and likeness were used to sell Cadillacs without his permission. https://bit.ly/2Jt0EWB He had integrity and was unafraid to walk away from a steady gig when he believed he was in the right.

I think my favorite thing he ever did was an episode for Parts Unknown. Tony goes scuba diving for octopi in Sicily, with the help of a local producer. But when there are no octopi to be found on the sea floor, the producer starts dropping them off the side of the boat.

Imagine the scene. Bourdain is twenty feet down with his cameraman, when store-bought, frozen octopi begin to float slowly by. It’s absurd, but precisely what a typical producer in my industry would do to do “salvage” a scene. Bourdain however, is appalled, and does the only sensible thing he can – he drinks through the rest of the episode, heavily. Later, in voiceover, reveals the botched attempt to fool the viewer by airing the raw footage. It’s the most honest thing I’ve ever seen, in a genre that stages 95% of what it presents as real.

Full disclosure – I don’t know Tony well enough to eulogize him. We met a few times, here and there, shared a few drinks, and complemented each other on our respective careers. We disagreed on plenty, but we approached non-fiction television the same way. Tony looked askance at rehearsals, scripts, executive oversight, and most of all, second takes. And he used his platform to do more than entertain.

A few years ago, at an event in New York, we traded war stories over some better than average bourbon. I asked Tony about the warthog anus he ate in Namibia, and whether or not the subsequent antibiotics did the trick.

“Hard to know,” he said. “By then, I’d developed a kind of natural immunity. What about you? Still keeping the Hep-A at bay?”

“So far so good,” I said. “My problems these days are mostly with PETA.”

Tony laughed. “Don’t get me started. They’ve got a file on me the size of a phone book.”

We talked about the importance of showing people where their food comes from. He told me about the petition against CNN that arose when he removed the beating heart from a snake. I told him about the boycott against Discovery when I butchered a cow on camera. We talked about the difficulty of producing a truly authentic show with sponsors and advertisers and millions of viewers with competing agendas, and how grateful he was for the chance to deliver the show he wanted to deliver. I told him about the night I saw him choking down the fermented shark in Iceland, back in 2005, and asked him if he ever imagined a scene like that would lead to a Peabody Award. He told me that awards were nice, but never part of the plan.

“I was mostly trying to amuse myself,” he said. “I just wanted to do a show that I could be proud of.”

Yesterday, when I heard he’d hung himself, I thought about the first time I saw “No Reservations,” while I was stretched out on that suspicious comforter in a Motel 6 outside Madison. I just found the clip-on YouTube and watched it again – this time from the comfort of a leather sofa, where the only DNA present was my own. I couldn’t help but notice the title of the episode – “Hello Darkness, My Old Friend.”

Old friends, it seems, have a way of reuniting.
Tragically, in this case.

My sympathies to his loved ones, and to his millions of fans trying to make sense of the inexplicable. His was a truly unique voice, and I’ll be among those who miss it.