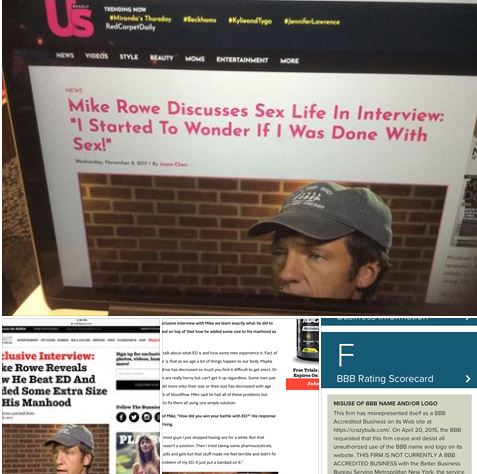 I just read your interview in US Weekly to your mother, and while we were saddened to hear about your troubles in the boudoir, we were relieved to learn that you have found a cure. So, congratulations on that, and by all means, enjoy your newfound dimensions. But don’t get carried away. Whatever this Louis CK character has contracted appears to be contagious. Be careful out there…

PS. Your “shortcomings,” for the record, are not genetic. (In case you were wondering.)

Thanks for the update, and for passing on your enormous genes. Sort of makes up for the flat feet. And thanks too for keeping Mom up to speed on my adventures with your soaring oratory. She is indeed fortunate to have married The Town Crier. However, I must inform you, (happily,) that what you read aloud from the pages of US Weekly was the very definition of fake news.

At the risk of “protesting too much,” let me say for the record that everything about the “article” is fiction – the claims, the quotes, the headlines, the testimonials…all of it. In fact, it didn’t even appear in US Weekly – the whole thing was an online advertisement mocked up to look like an actual interview, and then pushed into cyberspace by an unscrupulous cabal of hucksters and conmen, determined to separate frustrated men from their hard earned dollars by turning me into a spokesman for a product I’ve never even heard of. (“Hard earned.” See what I did there?)

These deceptions are everywhere, Dad, but this one is especially insidious. It relies upon an ever-changing template of lies and misrepresentations, including the unauthorized use of logos and mastheads from various magazines, (apparently I was also in Playboy and Sports Illustrated,) a completely fictitious interview with yours truly, and a dubious product with a dozen different names – all of which purport to have helped me get the lead back in my pencil. It’s outrageous, egregious, and illegal. But mostly, it’s just another example of why you and mom should remain skeptical of anything you read online about Hillary Clinton, Donald Trump, Russian collusion, and most of all, the size of my John Thomas.

As for the product itself, I’d like to tell you every pill is filled with sugar and sawdust, but since I’ve never actually tried it, I can’t really speak to its ineffectiveness. All I can say is that the makers have used my name and likeness without permission, and attributed words and phrases to me that are not my own. If they’re willing to do that, than I suspect the only thing their product will harden is the resolve of their dissatisfied customers – many of whom who have already complained to the Better Business Bureau, who, shockingly, have awarded the makers of Testo-Max HD an “F.”

Point is, anyone tempted to click on the “Free Trial” button should remember that trials are never free – including the one I hope to testify in, when justice finally bites these contemptible charlatans on the tips of their tiny tally-whackers. That would indeed, give me a whole new level of unbridled satisfaction…

Anyway, say hi to Mom, and don’t worry – I have no plans to follow in Louis CK’s footprints – or handprints, as it were. Presently, my hands are filled with other things.