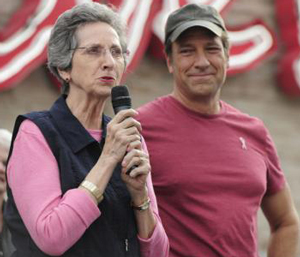 My mother likes to imagine she writes a column for The Reader’s Digest. Every month, she hammers out a few hundred words and emails them to my father. He likes to read her stories out loud from his tablet, sometimes to the shut-ins on his Meals-on-Wheels route, sometimes to the patients in the hospital where he volunteers. (My father likes a captive audience.)

Anyway, my mom wrote this one a few days ago, in honor of Breast Cancer Awareness Month. My father thinks it’s very good, and I agree. But since I don’t volunteer at the local hospital or deliver food to shut-ins, and since Mom still doesn’t have a column at The Reader’s Digest, I’m going to post it here, along with an early episode of RTF that seems appropriate for the month at hand. Please enjoy both.

An Anniversary Worth Remembering
by Peggy Rowe

I was well into my treatment for breast cancer when the nurse practitioner recommended a support group.

“Oh, I don’t need a support group,” I told her. “I have a very supportive family and good friends.” But she was busy writing on a pad.

“You say you’re always close to tears, you’re angry, and your behavior’s unpredictable. That sounds like depression.” It was true. I could be laughing one minute and sobbing the next. So uncharacteristic of me.

“Here you go,” she said. “The Wellness Community is an amazing place. Believe me, nobody understands you like other people who are going through the same thing. Give it a try!”

I put the paper in my purse and forgot about it — until the following morning when my husband, John, made a ridiculously unreasonable suggestion.

“You should get out of the house and take a walk on such a beautiful day, Hon.”

So naturally, I did the only logical thing. I picked up a saltshaker and hurled it at his head. Thanks to quick reflexes, John ducked in time. While he was hiding the kitchen knives, I made an appointment.

On Tuesday afternoon I found myself sitting with a group of seven strangers – adult men and women, young and old, from both ends of the economic spectrum, all struggling to cope with the stress of living with cancer. I didn’t realize then how dramatic my introduction to the group would be.

Our leader, a compassionate, experienced psychotherapist, kept the conversation flowing, as well as boxes of tissues, and chocolates. I hadn’t yet spoken when I helped myself to a piece of candy then stood up and carried the box to Bill, who was lying on a sofa with a pillow beneath his head. Still recovering from his latest round of chemo, he had been met at curbside with a wheelchair that day. I was holding out the box of candy when I suddenly tripped over Bill’s shoes. As chocolates cascaded onto his face and neck, I fell awkwardly onto his body with my hand in a most unfortunate place.
Appalled, I shot to my feet fearful that I had inflicted mortal damage on this poor, suffering man.

“Oh, I’m so sorry,” I said. Bill casually rolled a candy from his chin, into his mouth, and chuckled. “Believe me, it was my pleasure. This is the first time I’ve smiled in days.”

The group laughed along with Bill and me, and when it was my turn to speak, I shared my cancer story. I finished with the saltshaker incident, hoping I wouldn’t be judged too harshly.

“Oh that’s nothing,” Carol said. “I threw a plate of sausages at my husband the other morning – for no reason at all.”

When I recalled tears of frustration over a painful radiation rash, and trouble swallowing, Betty told us about breaking down in the grocery store when she couldn’t find her favorite cereal. Later in the session when the leader brought in a bowl of seedless red grapes, Bill announced, “I want Peggy to deliver mine.”

In the following months, I was buoyed by members’ courageous optimism, and saddened by their despair. No one ever gave advice or told someone else how they should feel.

I felt like a fraud, sharing the limelight with people in the latter stages of the disease and suffering from the devastating effects of chemo. When I heard there was a waiting list for Tuesday afternoons, I offered to drop out and make space for someone more deserving. Our leader convinced me that my presence was important to the group dynamic.

“Please stay, Peggy!” she said. “Each person brings something special. Your sense of humor is a breath of fresh air.” And so I continued on, long after my treatment ended, and our kitchen knives were returned to the drawer. Long after my burning radiation rash faded and I resumed showering, I supported my Tuesday “family.” I was embarrassed the day Nadine shared an intimate story with us.

“Since my chemo and hormone treatments, something really strange has happened!” she told us. Whenever I sneeze, I have an orgasm.”

I wasn’t sure if she was serious, but we all laughed, and I asked her if she had told her doctor. “Maybe they can do something for you,” I suggested, with an innocent expression.

The following week when we celebrated her birthday with cake and ice cream, I handed her a little gift. “It isn’t much, but I hope it brings you pleasure,” I said, as she unwrapped the small can of black pepper and laughed until ginger ale came from her nose.

We cheered when someone’s blood count improved, when an MRI confirmed no new tumor growth, or when somebody donned a new wig. The Tuesday thirty-five-year-old Sandra sashayed through the door sporting an outstanding pair of newly reconstructed breasts, we oohed and aahed, and celebrated with a round cake with a Hershey’s Kiss in the center. There were unspoken prayers for Carol as she traveled to far-off hospitals for experimental treatments — and mourning when those treatments were unsuccessful. I shed genuine tears of grief at Bill’s funeral and was outraged when Doris’s husband announced that he could no longer cope with her cancer — and left her, alone.

A year and a half after joining the support group, I shared how cancer had changed my life. “I woke up one morning and noticed a swelling on either side of my nose,” I told them. “I was convinced that my cancer had returned. My doctor referred me to an ENT (the same one who had removed our children’s tonsils.) During the examination, he peered at me over his glasses, and in a fatherly, Dr. Marcus Welby impersonation said, “I’m going to be honest with you, Mrs. Rowe.” I braced myself — some rare type of rhino-cancer, undoubtedly.

Then he put his hand on my arm and with a twinkle in his eye, said, “In all my years of practice, I have never seen, nor have I heard of…..a case of breast cancer metastasizing to the nose.” The group laughed along with me.

On my final visit to the Wellness Community, a full two years after joining, I shared the story of the rare “cancer” on my hand. The suspicious white streak on my knuckle had appeared one evening after my shower and by the following morning, was surrounded by redness and swelling. My GP referred me to a surgeon. In a sterile theater, wearing a mask and gown, he removed a foreign body from my hand that was roughly ½ inch in length and looked to be wooden. My husband brought it home in a jar, examined it under a magnifying glass, took a picture of it beside a toothpick, and pronounced it, “the most expensive splinter in the history of medicine.” When company comes, John shows it off like it’s the Hope diamond. “Yes siree,” he says, “the golden spike!”

This October is not just the twentieth anniversary of a frightening breast cancer diagnosis. It’s a month of reflection and awareness of others who were less fortunate than I. The Wellness Community is now HopeWell Cancer Support in Baltimore. The people in my group were real, though I changed their names.