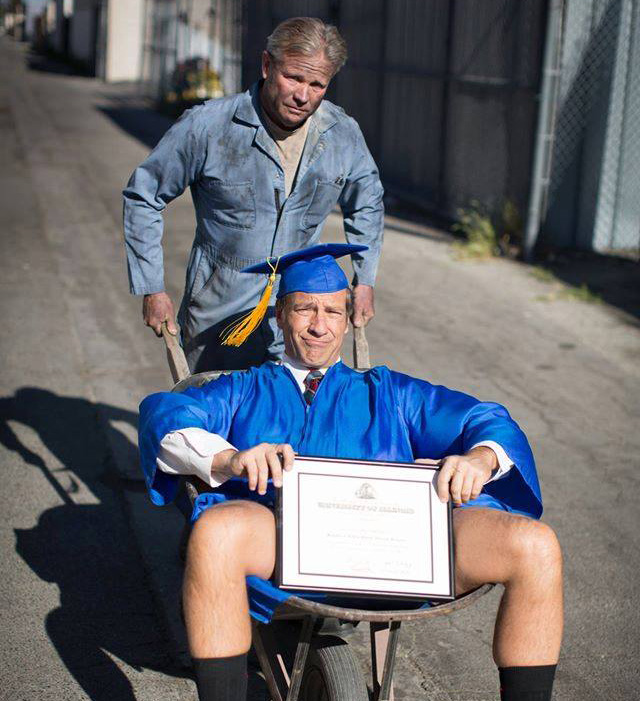 Mike, I have followed you since the first days of Dirty Jobs and Deadliest Catch, and I am amazed about your attitude toward higher education. I started my working career in the military then as an apprentice plumber and became a journeyman. At night I went to 2 years of community college and then took classes at the university until I had a degree. College allowed me to become a computer infrastructure analyst. I made more money, my body and back were spared.

I find it disconcerting that you place so little value on academic education. Not all college grads are in debt. There are scholarships, grants, tuition assistance programs. The next time you need a complex surgery given the choice, I am betting you would take the surgeon that graduated from one of those universities you so love to make fun of.

Do I think spending $100,000.00 on a Russian Lit. degree would be a choice for me? No I don’t. But I also know the person doing that most likely isn’t going to fit into a blue collar job. But that Russian lit. degree can get you into OCS in the military, an analyst job for many think tanks, law school, any job that requires a college degree.

While I do agree not everyone puts their education to work for them, they do have the opportunity.

First of all, congratulations on such a well-balanced resume. I sincerely admire that. Secondly, it’s hard to believe you could have “followed” me from the first days of Dirty Jobs and Deadliest Catch, and be so completely mistaken about my stance on the importance of a college education.

Apologies if I’m mistaken, but every day, protectors of “higher-education” come here to scold me for being “anti-college,” usually because they heard a soundbite on the news or saw a meme in their newsfeed they mistook for “research.” By and large, these are the same people who – if blindfolded – would touch the tusk of elephant and loudly announce to all the world the discovery of a creature made of solid ivory! And they always start as you do – by claiming to have “followed” me from the start. But then they argue in such a way that proves the exact opposite.

For instance, you write, “I find it disconcerting that you place so little value on academic education. Not all college grads are in debt. There are scholarships, grants, tuition assistance programs.”

If I may – where exactly, have you seen me argue against the importance of an academic education? Not the cost – I’m unapologetically opposed to the mind-bending, utterly indefensible skyrocketing cost of tuition. But if I question the value of a $2,000 pair of shoes, that doesn’t mean I’m “anti-footwear.”

And where exactly, have you heard me say or imply that “all” graduates are in debt? Sure – I’ve railed against the pressure we put on kids to borrow so much money at such a young age, and I’ve repeatedly likened the student loan bubble to the real-estate bubble that crushed our economy last time around. But where and when have I ever said that all graduates are indebted? If I’m critical of people who buy a house they can’t afford, that doesn’t mean I’m “anti-real-estate.”

And what exactly have I said or done to give you the impression that I’m unaware of “scholarships, grants, and tuition assistance programs?” In the last three years, not a month has gone by where I haven’t used Facebook to highlight a scholarship winner from my own foundation. Do you really want to use my own page to lecture me on the existence of scholarship money, while I’m using the same space to announce the recipients of millions of scholarship dollars? With respect, Michael, it’s just not a persuasive argument.

To be clear – I strongly support education in all its forms. I have a college degree, and as I’ve said many times, it’s served me well. But I believe society is making a terrible mistake by promoting college at the expense of all other forms of education. For instance, the surgeon you reference, (who I would indeed prefer to have graduated from an accredited university,) will never make it to the hospital to successfully remove my appendix without a functional infrastructure, which depends almost entirely upon an army of skilled tradespeople. And yet, our society clearly values the surgeon far more than mechanic who keeps her car running, or the contractor who put in the roads that allows her to drive to the emergency room.

This is the same bias that prompts us to pressure kids to borrow vast sums of money to get expensive degrees that all too frequently do not lead to a job that will pay them enough to service the debt. But again – that’s not an indictment of college; it’s a criticism of our tendency to encourage the same path for everyone, regardless of cost.

Let’s consider your example of the $100K degree in Russian Literature. As you’ve said, such a degree might very well be a wise choice for the right individual. Obviously, that’s undeniable. And I suppose, if the country were now facing an existential crises brought about by an alarming shortage of Russian Literature experts, I might very well be using this page to encourage more people to read Chekhov and Dostoevsky. But that’s neither the case, nor the point. The point, is that our culture does not make such nuanced distinctions when it comes to pushing the value of four-year schools – we push them on EVERYONE. We’ve got it into our heads that a college education is SO important, that the cost is irrelevant, along with the actual demand for whatever major a kid might wish to declare. “How dare anyone question such things!” Thus, we’ve encouraged an entire generation to borrow whatever it takes to get whatever degree they believe will make them happy. Is it any wonder tuition has risen so quickly?

Meanwhile, the kid who apprenticed to be a plumber or an electrician is looked at as something less. Even if he has no debt! Even if he makes six-figures a year! Even if he hangs out his own shingle and hires other plumbers! This year, American Standard donated $100,000 to my scholarship fund. It was a massive struggle to find anyone willing to learn the plumbing trade – even when the training was free! That’s because collectively, we still value that Russian Lit degree more than a plumbing certification! Honestly, it’s enough to make me rely on exclamation points way more than usual!!!

What I’ve opposed – consistently – is not the importance of higher education, but rather, the relentless drumbeat of “college for everyone.” That’s the real problem, and it’s worth repeating. Because this cookie-cutter approach to education presupposes that all worthwhile knowledge can only be attained from a college or a university. That’s the most dangerous myth of all, and the unintended consequences are now self-evident – the vanishing of shop class in high schools, $1.3 trillion dollars of student loans, and 6 million vacant jobs that no one is trained to do. That’s the skills gap. It’s real, and it’s a massive problem for anyone who shares my addiction to smooth roads, cool air, and indoor plumbing.

Finally, Michael, at the risk of protesting too much, let me assure you that those who actually follow this page know that my message is deeply pro-education. However – the best path for the most people should never the most expensive, and as long as the government is in the business of lending billions of dollars to college students, I’ll continue to challenge the idea that college is the only place to get a worthwhile education. Likewise, as long as six million jobs sit vacant – the majority of which do not require a four-year degree – I’ll encourage you to join me.