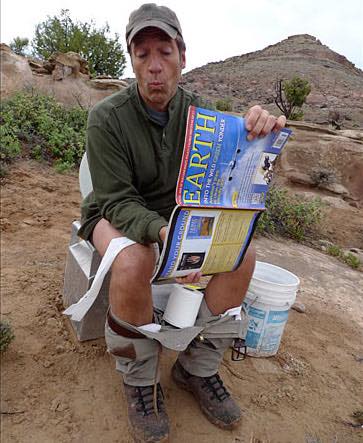 Someone just told me it’s National Courtesy Flush Day. I have no idea if this is true. But if it is, I would be remiss if I didn’t repost one of my favorite questions ever.

Hi Mike, I need your help. Would you be able to write a short note/memo to my coworkers explaining the courtesy flush? Some people apparently have never heard of the concept.

Happy to assist. The courtesy flush is an attempt to bring a heightened level of civility to public restrooms. The premise is simple. If one is inclined to linger on the commode after defecating for the purpose of reading, reflecting, or any other pursuit not directly pursuant to pooping, he or she would resolve to flush the commode seconds after jettisoning his or her final scat, and once again before leaving, in order to remove any used toilet paper, etc. In this way, the offending effluvium is whisked away prior to wiping, allowing the user to linger on the bowl for as long as they desire, while sparing innocent bystanders the full-brunt of any lingering funk.

Years ago, I embraced the courtesy flush after learning that all odors are particulate. That is to say, an odor is not really an invisible vapor – it’s an actual particle that floats in the air and occupies a visible space. Thus, aromas don’t stop when they reach our nose – they physically enter our bloodstream and travel through our body. Flatulence for instance, is the result of a physical particle exiting someone’s lower GI tract and traveling directly to our brains. Likewise, the stench of human excrement is really a miasma of multitudinous, tiny turds floating around the atmosphere, competing for a chance to invade our circulatory system. I used to consider the courtesy flush a logical defense against this kind of assault, but I’ve since changed my mind. Because, like the minimum wage and rent control and a lot of other well-intended strategies, I’m afraid the courtesy flush is ripe with unintended consequences.

First of all, the courtesy flush doubles water consumption. The current drought in California is no joke, and if things don’t get better, a trip to the john as we know it may soon be a thing of the past. Those in favor of pooping in water could quite possibly destroy the privilege of doing so through multiple flushing.

Secondly, the courtesy flush is a nightmare for sewage workers. Trust me, these guys do not require additional fluid to shepherd our feces from point A to point B. As a frequent visitor to many municipal sewer systems, I can assure you, it’s moist enough down there as it is.

Thirdly, the courtesy flush – like air fresheners and too much ventilation – discourages productivity in the workplace. Everyday, millions of workers spend thousands of unnecessary hours squatting on the bowl, passing the time in a way that the progenitors of indoor plumbing never intended. The truth is, a stench-free restroom encourages loitering in a place that was never meant to be occupied for more than a minute or two. This is not only a threat to overall productivity, it’s a threat to anuses everywhere, which brings me to the biggest threat of the courtesy flush – hemorrhoids.

Because the courtesy flush encourages more time on the bowl, it also promotes more pressure on the rectum, which often leads to hemorrhoids and fissures and a long Parade of Horribles your bottom would happily forgo if given the option. (If you’ve never had a hemorrhoid, goggle it. Click on images. Go ahead, I’ll wait…See what I mean?)

Ultimately Matty, the courtesy flush is a short-term solution that causes more problems than it solves. But take heart. Though silent, the smell of human feces isn’t really deadly. Personally, I’ve come to believe it builds character, and while I don’t seek it out, it’s presence now reminds me of one more thing that should unite us instead of divide us. And today, that’s no small thing.

However, I’m all in favor of lighting a match whenever necessary. I mean, come on. We’re not animals.