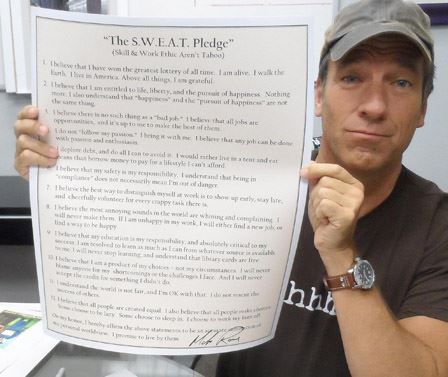 I heard about your work ethic scholarship program, and suggested my son apply. He wants to be a welder! I was appalled though, when he showed me your “sweat pledge,” and told me that signing it was required of all applicants!! Where did you come up with this nonsense? There are so many things wrong with this document I don’t know where to begin!! Suffice it to say, we will not be applying!!!

If it’s any consolation, you’re not the only one to object to my S.W.E.A.T Pledge, or do so with an over-reliance on exclamation points. Over the years, it’s been my sad duty to inform lots of angry parents that this particular pile of free money might not be for them. Or in this case, their kids. Such is the situation with us. Try not to take it personally. I wish your son every success, but have no interest in paying for his training if doesn’t share my opinion about the nature of work ethic, a positive attitude, delayed gratification, and personal responsibility. But don’t be discouraged – lots of scholarship funds will give money to people with no strings attached, and I’m sure you’ll find one that causes you less angst than mine. Now, since you asked, allow me to answer your question.

I came up with this nonsense several years ago while drinking beer at my kitchen table and searching for a way to sum up the kind of belief system I’d like to encourage in the work force. What I settled on was the S.W.E.A.T Pledge – a 12-point statement of belief that espoused my personal feelings toward work. It stands for “Skill and Work Ethic Aren’t Taboo,” and its format was inspired by the Boy Scout Law and AA’s Twelve Step Recovery Plan. Mostly though, it’s a collection of lessons learned from Dirty Jobs that I believe every worker would benefit from embracing, regardless of their job or skill set.

Now, you didn’t tell me Karyn, what specific parts of the pledge you found most objectionable, but I’d be curious to know. Typically, people like to complain about the patriotic undertones of points 1 and 2, the parsimonious vibe of #5, and the paternalistic feel of #8. Many have accused me writing a conservative manifesto, but I don’t see anything in this pledge that’s inherently political. In fact, most of these statements are in line with classic liberal thought.

I’ve also been told my Pledge is “weighted heavily in favor of employers,” who are really just looking for “more and more ways to abuse their workers.” I don’t see it that way, but I can understand why others do. It’s popular these days, to see employers as the enemy. I reject that out of hand, just as I reject the idea that the merits of an individual worker have anything to do with their race or gender.

Finally, it might amuse you (but probably not) to learn that we’ve raised tens of thousands of dollars for the scholarship program by selling individual S.W.E.A.T Pledges. Thousands now hang in schools, factory floors, construction sites, and cubicles across the country. If you’d like one for yourself, we sell them for $12, or $100.00 personalized.

All things considered, I’d be happy to send you one for free, just to prove there are no hard feelings. Let me know. As for the rest of you, we’re still accepting applications for this round of scholarships. Apply here.