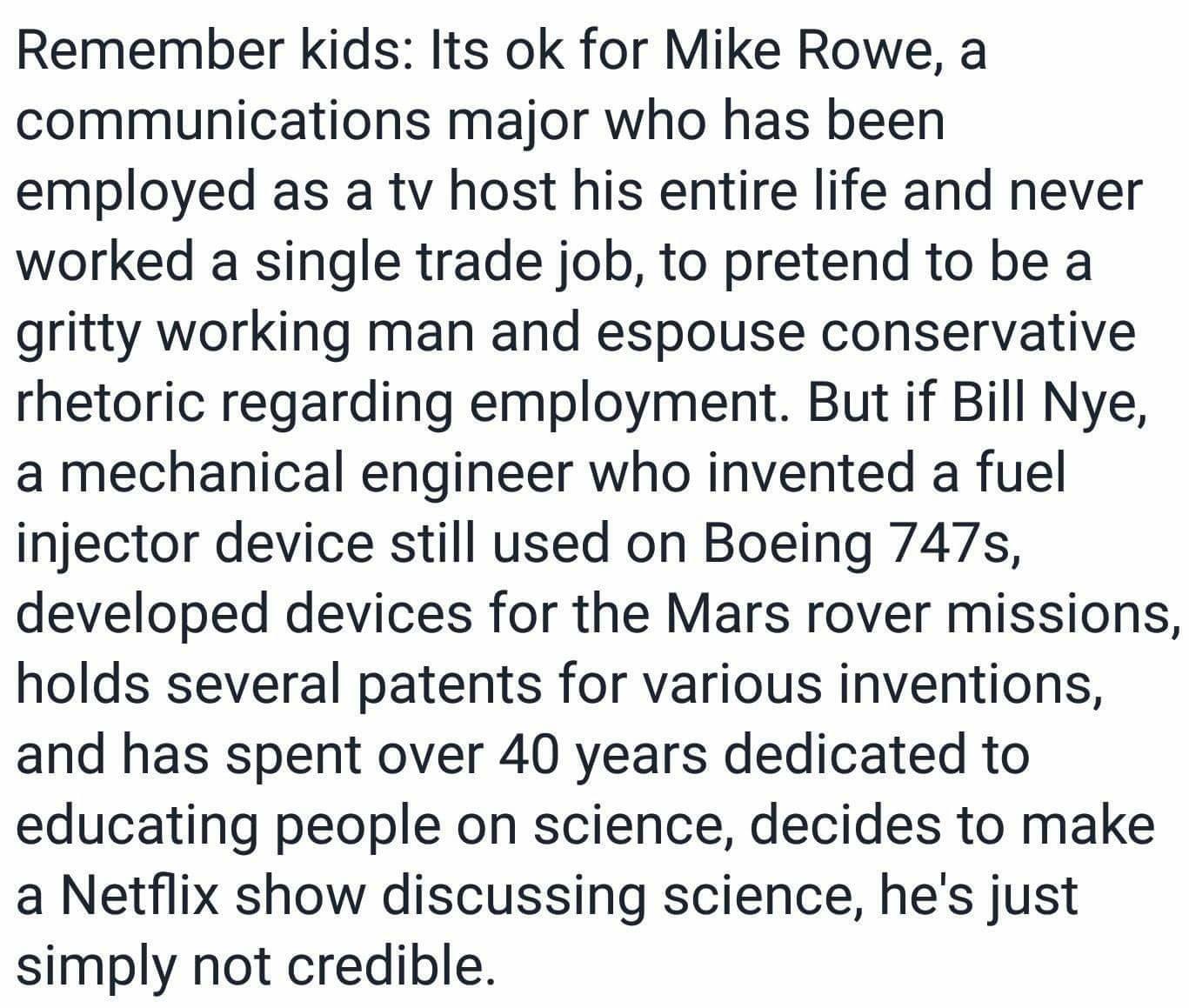 Melissa Heiser writes… Surprised you haven’t responded to Shepdick and the slamming of yourself on the Tysonism page while they compare you to Bill Nye.

Actually, I have responded. Repeatedly. Not to ShepDick, specifically, or to the luminaries over at Tysonism, but rather, to all of the Woodward’s and Bernstein’s out there who have just discovered I don’t really work on an alligator farm, a crab boat, an oil rig, a construction site, a bison ranch, a junkyard, a coal mine, a condom factory, a septic tank, a paper mill, a bat cave, a sewer line, or any of the 300 other locales I’ve been known to frequent on the tee-vee. Fact is, ShepDick is only the latest gumshoe to reveal the “hidden truth” of my scandalous past – the undeniable reality that I’m not in fact, a “real tradesman,” (gasp!) but rather…wait for it…wait for it…a TV Host (!)

I first responded to this newsflash a few weeks after Dirty Jobs premiered, way back in 2003, when a crusading critic in Seattle rushed to inform his readers that I wasn’t “an actual worker.” I’ve been responding to that same revelation ever since. Honestly, you can set your watch by it. Every month, for the last fourteen years, it occurs to guys like ShepDick that I don’t possess any of the actual skills required to work in the industries my TV show highlighted. This breathless disclosure is usually followed by the “truth” of my actual resume – which includes six years in The Baltimore Opera, three years in the home shopping industry, and hundreds of other dubious hosting gigs that apparently disqualify me from having an opinion on the nature of hard work and skilled labor. Ya gotta laugh.

But here’s the thing, Melissa. I don’t mind being called a dilettante, because I am. I happily embraced my amateur status years ago, and I’ve made no attempt to hide it. But it’s hard to know what to say when someone accuses you of being untrained – especially when your role is clearly that of an apprentice. Obviously, ShepDick has a political agenda, and he’s trying to advance that agenda by accusing me of pretending to be something I’m not. That’s not something I can ignore. So Melissa, since you were kind enough to bring ShepDick’s little meme to my attention, please feel free to forward my reply to the entrance of his virtual lair.

Mike Rowe here, with some breaking news! Are you sitting down? Here it is: When it comes to the skilled trades, I am not an expert.

I know this might come as a shock, but it’s true. Unlike “The Science Guy,” I am not, “The Skilled Labor Guy,” or “The Dirty Jobs Guy.” Nor am I a “spokesman for blue collar America.” It’s possible I’ve been called those things by others, and it’s likely you’ve seen all sorts of memes in your newsfeed that foster that impression. But the fact is, I have never pretended to be something I’m not. In fact, I’ve repeatedly gone out of my way to clarify the scope of my vast limitations. And while I appreciate your help in spreading that important truth, I’m really writing to tell you how much I resent your recent comparison between myself and Bill Nye.

Bill Nye has taken all sorts of positions on many controversial subjects. That’s fine by me. I’ve done the same. It’s fun! But Bill has positioned himself as an authority on the issues he discusses. He has actually branded himself “The Science Guy,” even as he denounces skepticism. Fine by me – it’s a free country. But to imply that I’ve tried to do the same thing around the topic of Work is not only ridiculous, it’s insulting. I would never try to brand myself in such a way. Every opinion I’ve ever shared is prefaced and followed by the fact that I’m not an expert. The only thing I’ve ever called myself, aside from a TV Host, is a “Perpetual Apprentice.” And the only thing I’ve ever claimed to be an authority on, is me.

To be clear, I have nothing against Bill. I met him a few years ago, and he was a perfect gentleman. We did a radio show together, as I recall, and though I suspect we might disagree on any number of things, he was both thoughtful and polite to me and the rest of his guests. However, I would never juxtapose myself with Work, in the same way Bill has juxtaposed himself with Science. And I would never suggest that anything I say be taken at face value. I welcome skepticism, and I encourage everyone to examine my claims closely before accepting them as the truth. Hopefully, they’ll do the same with yours.

Finally, ShepDick, if you’re really going to give kids advice, and you insist on dragging my name into your next meme, tell them the truth. Tell them I’m just a guy with a TV show that pays a genuine tribute to real people with real jobs. Tell them I run a foundation that helps get people trained for good jobs that actually exist. It’s a modest foundation, but we’ve given away about $4 million so far, and I hope to do a lot more in the coming years. Tell them, if they’re interested in learning a skill that’s actually in demand, we’re accepting applications for our next round of Work Ethic Scholarships. They can check them out at mikeroweworks.org. And so can you, if the prospect of actual work sounds appealing.