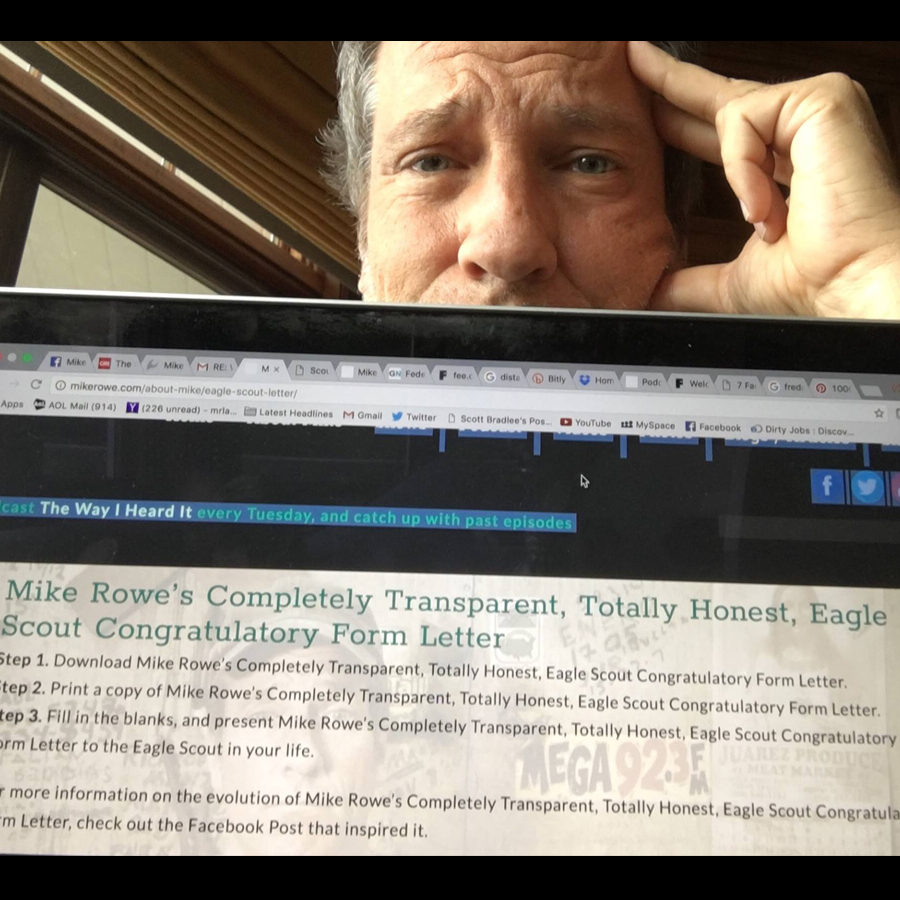 Mike – what happened to my son’ Eagle Scout Letter that we sent for your real signature? I quote from the original text that you provided:

“And even though many Eagle Scouts have received this exact letter, you will notice that the time has been taken to scribble your name into the blanks provided.”

“PS. The signature, for what it’s worth, is really mine.”

These phrases are now conveniently omitted or revised in the substituted version that we received, most notably a photo copy of your signature with the PS revised to say “The signature, though photocopied, is really mine.”

Mike, I respect you as a role model, your accomplishments, and much of your wisdom – but this was not expected and certainly not well played sir.

And this, from Chris Dellacqua…

Mike – You recently sent my son an Eagle Scout congratulations letter. Your letter was signed with a “Fake Signature.” Please don’t let your fame go to your head. I know that you probably receive hundreds of requests, but I am sorry you can no longer take the time to hand sign a stack of the fake letters. A disgruntled ex-fan…

Howdy, and thanks for the feedback. I appreciate it.

Let me begin by saying that you’re not the only parents to complain about the photocopied signature on my “Completely Transparent & Totally Honest Eagle Scout Congratulatory Form Letter.” Others have complained about the overall tenor and tone of my letter, as well as the multiple blank spaces that need to be filled in by hand. (Interestingly, I’ve received no complaints from any of the actual recipients. Eagle Scouts, by and large, don’t complain.) But since their parents are being so…candid, allow me to respond in kind, and suggest – with respect – that your disappointment might be missing the larger point. Because the real purpose of letter is not to provide your son with an autograph – it’s to share my thoughts on what it means to become an Eagle Scout – an accomplishment that I believe is still worth recognizing.

A bit of history, for the casual reader. When I first started sending out these letters, I wrote them all by hand, and signed each one personally. As word got around, I received more and more requests, and the process soon became unworkable. That’s when I wrote a Form Letter, posted it online, and invited people to send it to me so I could sign it and send back. Over the last ten years, it’s been my privilege to return over 50,000 signed copies of that very letter.

So yes, Ray and Amy, you are – there was a time when these letters were personalized. Unfortunately, that time is over, because that process has also become unworkable. We’re just too small to handle the volume, and I can’t keep up. And so, my options were these: I could a), replace the old letter with nothing, and simply ignore hundreds of monthly requests, or b), revise the old letter to reflect the truth of the current situation.

Obviously, I opted for Plan B. The specific phrases to which you refer were not “conveniently omitted” – they were deliberately revised to reflect reality. The new version is still a form letter – it says so throughout. And clearly, my signature at the bottom is photocopied – it says as much in the PS. I realize Chris, that you are disappointed by this, but I’d rather disappoint you with the truth, than send out a form letter that pretends to be something it isn’t.

Again – I do appreciate the feedback, and I don’t mind the criticism. But for the parents of Eagle Scouts, the choice is simple. If you think your son would value my sentiments, more than my signature, then feel free to share with him a copy of my “Completely Transparent & Totally Honest Eagle Scout Congratulatory Form Letter.” Frankly, I think it’s the most authentic thing I’ve ever written – fake signature and all. You can read it for yourself, here.

If you like it, print out a copy, fill in the blanks, and present it to your son along with my best wishes. If not, please accept my congratulations anyway. Clearly, you’ve raised a young man with the will to accomplish something important at an early age. You should be proud of that. Please don’t let your disappointment with me get in the way.

PS. I don’t know if you saw it, but a few weeks ago, I read another letter on this very page – a letter from a Girl Scout named Charlotte McCourt. Her brutally honest reviews of Girl Scout cookies went viral, and as a result, Charlotte sold over 26,000 boxes, shattering every existing record, and raising over $100,000. Charlotte’s letter reminded many people that honesty is still the best policy. Hopefully, people will read my letter and come to a similar conclusion.