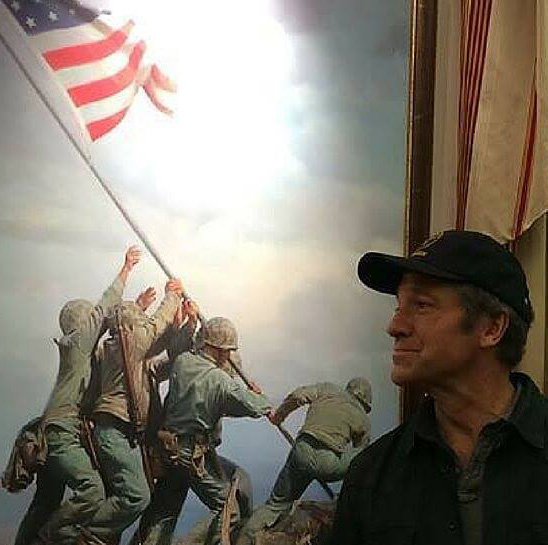 How did you become so blindly patriotic? First of all, the college you were referencing in your rant about the American flag is a private college and doesn’t receive federal funding. However…the very essence of freedom in this country is our right to speak out against the flag, which is a mere symbol. If you take away that right, then we have lost all freedom. You really need to take a civics course, Mike Rowe. I used to like you; but, you have really become very annoying to me in recent years. I thought you were more intelligent. But, I guess appearances aren’t everything.

I’ve never thought of myself as “blindly patriotic,” but I am a fan of the United States, the founding fathers, and the men and women who have served on my behalf. I also confess to feeling lucky to live here. Having said that, I think you’re correct about the flag; it’s only a symbol. So too is the Crucifix. And the middle finger. And the compressed chunks of carbon that millions wear on their ring fingers as expressions of timeless love and eternal devotion.

It’s easy to make anything feel small and silly by reducing it to its chemical composition or its various component parts. But if you really believe our flag is nothing but a “mere symbol,” equally suitable for flying or burning, ask yourself if you’d be comfortable if the people you work with suddenly started coming to the office in pointy white hats fashioned from bedsheets? Would that be a problem for you? Or how about The Rainbow Flag, favored by the LGBTQ community? Would it be OK with you if people started burning that? If not, why not? I mean, it’s only a symbol, right?

Years ago, an artist named Andres Serrano presented a charming piece called “Immersion.” It consisted of a Crucifix, immersed in a glass of the artist’s urine. Amazingly, some people were offended. Christians, in particular. They couldn’t see that Andres had created a statement. A mere symbol. Silly Christians. Interesting though, that Andres didn’t submerge Mohammed in the same glass. I wonder why that is?

The thing about “mere symbols” Susanne, is that they represent “mere ideas,” and “mere ideas” are the backbone of ‘mere humanity.” In the case of the flag, we’re talking about ideas that are wrapped into the Constitution – a document that separates us from every other country on the planet.

Mere ideas are the reason people fight and die. Mere ideas are the reason we’re allowed to speak freely, protest publicly, bear arms, and burn the very symbol that represents those very freedoms. I didn’t suggest for one moment that you or anyone else be denied your right to fly or burn whatever flag you wish. What I failed to do, is quietly accept actions that I don’t personally care for. Which, if I’m not mistaken, is the same compulsion that motivates others to publicly express themselves in whatever ways they choose.

As for Hampshire College, I’m afraid you’re mistaken. If you check the link I provided in my original post, you’ll see that several forms of federal funding are readily available to their students. Also, according to their site, you’ll notice that the flag is once again flying at full staff. I’ll take no credit for this, if you offer no blame. Deal?

Finally, regarding my overall annoyance, you’re correct, and you’re not alone. I’ve been annoying people for years now. Just ask my mother. And yes, I too, once thought I was more intelligent than I actually am. I still remember the disappointment when the test results come back.

Anyway, thanks for your comments, Susanne. I do hope you’ll stick around.