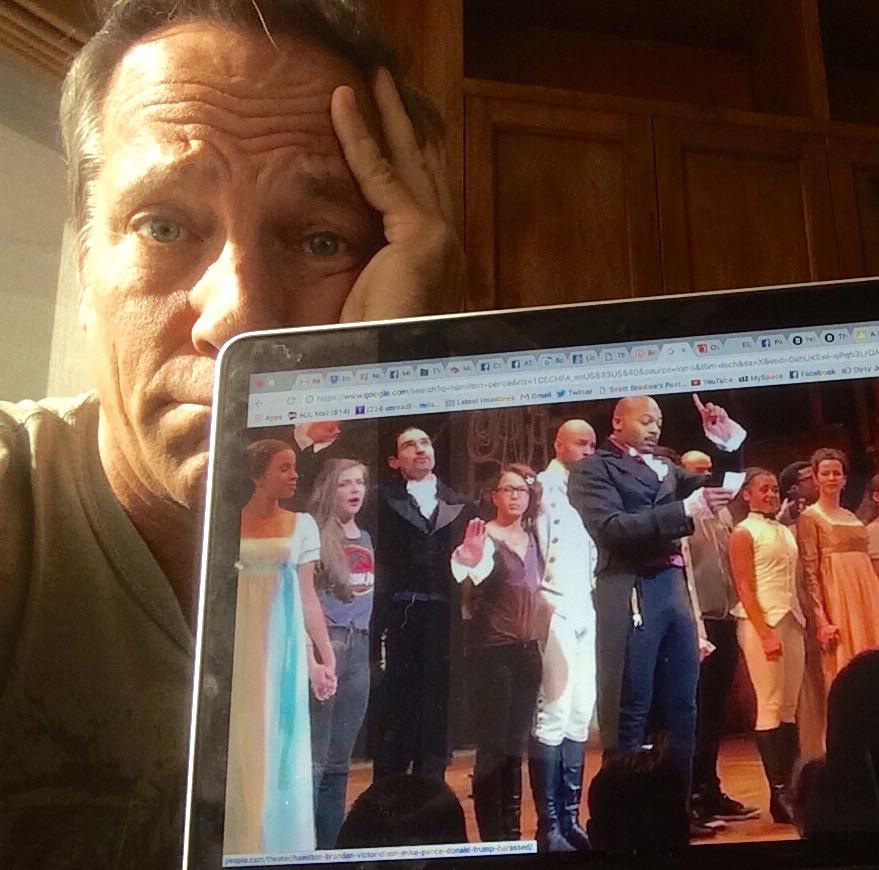 Mike – Please pardon my “white privilege,” but I’m pissed. I was at The Richard Rogers theater Friday night in NY. I thought the show was fantastic. I thought the cast was amazing. How though, can anyone justify their unsolicited comments to Mr. Pence during the curtain call? I didn’t pay (exorbitantly, by the way,) to hear someone’s personal opinion spouted from the stage. Just curious on your take, as a self-proclaimed former thespian.

It’s true. I have indeed committed acts of dramaturgy on more than a few occasions, and shockingly, I do have some thoughts on the difference between art and artists. First though, I have to correct you about the nature of what you “paid for” last Friday. Hamilton is in fact, a personal opinion. Specifically, that of the playwright – Lin-Manuel Miranda. Make no mistake, that’s the opinion you paid to hear. If you’re pissed, I suspect it’s because you got some other opinions as well. But since you asked, here’s another!

I think the cast of Hamilton shared their feelings publicly, because it felt really good to do so. Unfortunately, I think their comments diminished the impact of an excellent show, and probably accomplished the exact opposite of the playwright’s intent.

A brief digression, before I circle back.

Last week, Matt Malone, the CEO of Grub Hub, wrote a letter to his employees that encouraged anyone who agreed with Donald Trump to tender their resignation. Frankly, I was stunned.

What kind of CEO would alienate a public company from half the country? Is he, as some have suggested, “a leader of deep personal conviction?” Or is he just a very bad businessman who values his personal feelings more than the feelings of his board, his shareholders, or his customers?

I had a similar question when Colin Kapernick refused to stand for the National Anthem. What kind of American refuses to respect a flag that so many died defending? Is he, as many seem to believe, a courageous and principled patriot who took a stand by sitting down? Or is he a disrespectful, self-serving opportunist with no regard for his team, his league, or his fans?

Beats me. It’s hard to know the motive of another. However, I do know how satisfying it is to share my feelings with millions of people. Unfortunately, I also know that my feelings – in and of themselves – are profoundly unpersuasive things. It’s satisfying to share them, but it’s almost never convincing. And yet, that’s precisely what the whole country appears to be doing – including the cast of Hamilton. They just told the next Vice President that they are overcome with feelings of “alarm and anxiety.”

In my opinion, that was a mistake. Because unlike athletes and CEO’s and protesters and millions of other concerned Americans with similar feelings, the cast of Hamilton didn’t have to deliver a lecture in order to make their point. Because the cast of Hamilton has at their disposal, a far more persuasive device. They have a play.

When Shakespeare wrote, “The play’s the thing,” Hamlet was telling us the most effective way for him to make his point was to keep his personal feelings out of the conversation. So Shakespeare constructed a play within a play, in which Hamlet was able to achieve his goal. Brilliant. And that’s precisely what’s so ironic about Friday’s outburst.

Hamilton is already a love letter to diversity. It’s a very persuasive homage to inclusiveness, individuality, and many other things that make America a place worth immigrating to. The play delivers that message to everyone – including people who may have voted for Trump and Pence. But the cast – speaking out as they did – failed to make the play more persuasive; they simply made it more personal. More partisan. Smaller. The cast forgot that the play is the thing! By sharing their personal feelings with paying customers, they turned a play into a polemic. And polemics are the most unpersuasive things of all.

Please – don’t misunderstand me. Few things are more critical to our democracy than the first amendment. I know that. And if the cast of Hamilton wants to express their personal feelings from the stage, that’s fine by me. Likewise, if athletes want to nap during the Star Spangled Banner, and corporate CEO’s want to publicly proclaim their contempt for those who vote the “wrong way,” I say go for it! Just remember, the first amendment does not include the right to be agreed with, or the right to be understood, or the right to express your feelings without consequences. Last I checked, Grub Hub stock is down over 10%. And the NFL ratings are down 14%.

I’m sure the future of Hamilton will be just fine. They’re sold out through 2017, and I say good for them. It’s a hell of a good show. But if I were Lin-Manuel Miranda, I’d be the one demanding an apology. From my cast. And I’d be having a very serious conversation with them about the eternal wisdom of Hamlet, Act 2, Scene 2.

PS. As for Trump’s return tweet, I think he’s also mistaken. The theater should not be a “safe place for everyone.” If you want a safe place, go to Yale. Or Rutgers. Or Brown. Whatever else our universities are becoming, our theaters should continue to be a place that challenges us. A place that makes us think. A place that makes us occasionally uncomfortable. That’s what a good play can do. Assuming of course, the actors can stick to the script, and let the play speak for itself.