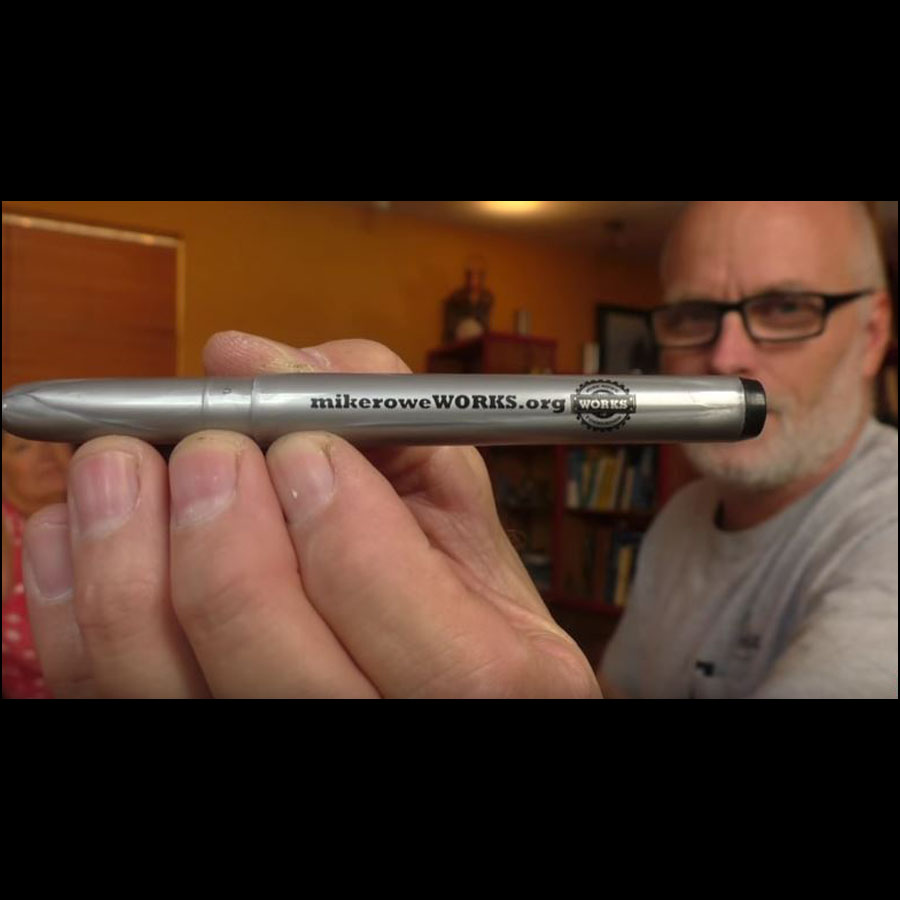 Here’s a 40 second video I just found on my wall. I can’t stop watching it.

On the surface, it’s self-explanatory. A man – in the midst of some sort of DIY project – pauses in his work to extol the virtues of the mikeroweWORKS RevMark Quick Draw Marker. It’s a completely unsolicited plug for our current fundraiser, and a fine explanation of why this marker is now considered by many to be no less important to civilized life than the wheel, the combustion engine, and the bottle opener.

However, it’s impossible for a curious person to watch this video and not be distracted by a series of questions that demand immediate answers. What for instance, is going on with the silent woman with the stars on her shirt, lounging inexplicably in the background? Who is she, and why does she look so…insouciant? What sort of dog is she petting? Is that a Beagle or a Bassett? (Note the ears, at :32 seconds.) And most of all, who is this guy talking, why is he selling my markers, and what the hell is he actually making?

My only available clue was the logo on the guy’s shirt, so I googled it, and quickly learned the “Seeker” is a sailing vessel.  According to the introductory video, the guy’s name is Doug, and he and his merry band of welders, artists, and other craftsmen are attempting to build a boat in his front yard – specifically, a 74 foot Chinese Junk Rig. From what I can gather, Doug will eventually live on this boat, presumably with the insouciant woman with stars on her shirt, and the mysterious canine with the long ears. But of course, that’s mere conjecture.

Full disclosure – I don’t know Doug, but I love what he’s doing, and if the DIY Channel is watching, they should get a crew over there, pronto. And since Doug was kind enough to plug my industrial strength marker with such heartfelt enthusiasm, I thought the least I could do was call attention to his little project, which I think you’ll agree, has gotten completely out of hand.

I’ll be back later today or tomorrow with The Way I Heard It. Unless of course, I continue to Forrest-Gump my way through Doug’s shipbuilding odyssey. In the meantime, get yourself an industrial strength, mikeroweWORKS RevMark Quick Draw Marker at RevMarkUSA.com. And for the love of God, don’t forget the Promo Code. It’s “Mike10.” Enter it, and you’ll get a 10% discount and my foundation will get a 10% donation. They’re relatively inexpensive, virtually indestructible, and made in New Jersey, which I’m pretty sure is still part of the USA. I’m also told you can find them at Menard’s in October, but don’t take it from me. Take it from Doug – the guy building a ship in his front yard.

And the silent lady in the background with stars on her shirt.
And whatever kind of dog that is…