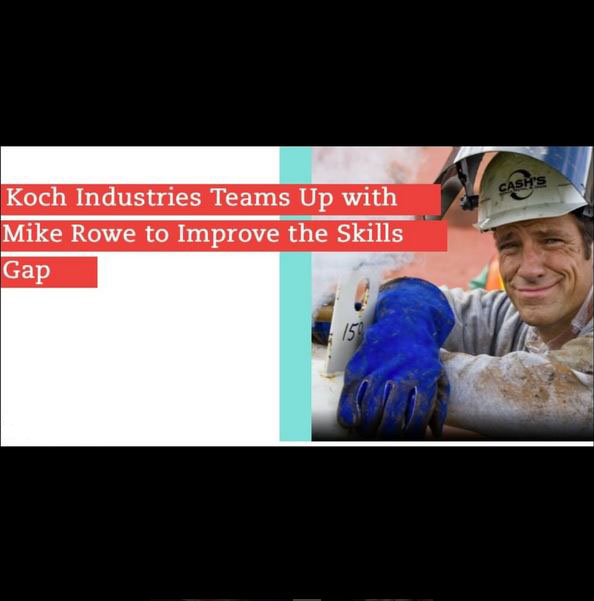 If you haven’t seen it, my name appeared a few weeks ago in a headline next to Koch Industries. What could possibly go wrong?

Well, let’s have a look.

Pablo Elvira says…Mike – I’ve never written a “protest” email before now, but I’m compelled. Your association with The Koch Brothers has obliterated my trust in you.

Steven Stahl writes… I have lost a huge amount of respect for you. Mike, you are better than this.

You can set your watch by it. Whenever my name appears next to an individual on someone’s “List of Known Enemies,” people line up to tell me why they can no longer be my friend, or watch my shows, or support my foundation. From Glenn Beck to Bill Maher, my proximity over the years to the “wrong guy” has prompted hundreds of Facebook friends to scoop up their marbles and stomp off in a huff. (Although I must say, this is the first time my proximity to the “wrong guy” has brought about the demise of a ten-year celebrity crush. That one stings.) Point being, the reaction to this most recent headline is neither shocking nor mysterious.

Like most of you, my opinion of public figures is influenced by what I read in the press, and what I read about The Brothers Koch leaves little doubt they they ride with The Four Horsemen of The Apocalypse. Over the last few years though, my opinion has changed. Partly, because I took it upon myself to read beyond the headlines, and partly because I came to learn that our foundations are aligned on a number of issues important to me.

Over the last few years, the Charles Koch Foundation has supported mikeroweWORKS in a meaningful way, and together, we’ve made a positive impact on hundreds of people. I’m proud of that, and grateful for the support. And while I understand that some of you would prefer not see his name on this page, you should know that I would never accept support from someone I was uncomfortable thanking in public. That would be a bit, you know…chickenshit. So, for those curious as to how Charles Koch and I wound up in the same headline – read on.

We met a few years ago in California. I had just given a speech about the disastrous consequences of removing vocational education from high schools, and Charles was in the audience. One of his people invited me to lunch, and I said sure. I was eager to see the horns and smell the sulphur for myself. Surprisingly, I found neither. What I found, was a 78-year-old man with more energy and enthusiasm than I could match. We spoke at length, and I learned a number of surprising things.

I learned for instance, about his passion for criminal justice reform. He’s frustrated by the fact that punishments no longer fit the crime, and angered that minor drug offenders and rapists often serve comparable sentences. He’s proud that Koch Industries does not ask those applying for employment to “check the box” with regard to previous incarceration. He told me that once a debt is paid, the balance sheet should be clear. I was surprised, because the man I had read about seemed very much at odds with a crusader for the formerly incarcerated.

We then talked at length about the dangers of a two-tiered economic system, and his belief that cronyism was at the heart of so much unfairness in today’s society. Charles told me about a documentary his foundation funded that exposed the obscene policy of charging people (black women, primarily) thousands of dollars for a license that allows them to legally braid hair in their communities. I watched it later, and it made me angry. It also made me think about the hundreds of entrepreneurs I’d met over the years who expressed similar frustrations in their own industries. Again, I was surprised. I had read nothing from anyone about Koch’s concern for the little guy. Not what I expected.

But I was most surprised by his commitment to reinvigorate the skilled trades. I knew his foundation focused on many forms of higher education, but I had no idea we shared a common view regarding the skills gap. He pointed out that countless small businesses begin with a tradesperson who learned a skill that was in demand. I shared my belief that a chronic skills gap was more troubling than chronic unemployment, because the existence of opportunity that people don’t care about is more alarming than a lack of opportunity overall.

In short, we found ourselves in violent agreement on a number of things important to us both, and after lunch, he told me to let him know if mikeroweWORKS could ever use his help. (In hindsight, it’s entirely possible he was just being polite, but he would soon learn just how literal I can be.)

When I got involved with Project Jumpstart in Baltimore, I called Charles and told him about their incredible track record preparing inner city kids and non-violent offenders for a career in the trades. At base, Jumpstart is a pre-apprenticeship program for the construction trades. The placement rate is an astonishing 80%. Jumpstart not only trains people for the job at hand, it helps them solve problems that often prevent people in their position from succeeding. They pay a stipend, for instance, while being trained. They help with transportation to the job site, and provide extraordinary mentorship and follow up. But there are also consequences. Trainees can lose their stipends if they don’t comply with the rules. I spoke with many of the graduates, and they all talked about how important the “real world training” was to their success. When I told Charles about the program, his foundation stepped up.

When SkillsUSA came around this year, I told him I was speaking at their opening ceremony. He wasn’t familiar with the program. When I explained its impact on the next generation of skilled tradespeople, he was once again intrigued. He wanted to know how an organization that did so much good, and consisted of nearly 400,000 kids, was unknown to so many. I told him the challenge facing SkillsUSA was not so different than the challenge facing many companies looking to recruit skilled labor – basic awareness. I told him my foundation made sure that kids who qualified for the National Finals had their transportation and lodging covered, if they couldn’t afford to get there on their own. Charles liked that, and he doubled the resources we had allocated for this year’s event.

Most recently, The Koch Foundation allowed mikeroweWORKS to help more people than ever before through our Work Ethic Scholarship Program. Thanks to their support, everyone who qualified this year is getting the training they need to begin a meaningful career. Charles was particularly taken with our S.W.E.A.T. Pledge (Skills and Work Ethic Aren’t Taboo) and found in it many ties to his own foundation, specifically the themes of self-reliance and hard work.

So – to Pablo, Steven, Mande, and anyone else compelled to share their disappointment – I get it. But look – if I only associate with “approved people,” or limit my relationships to those who see the world exactly as I do, then I might as well build a church and preach only to the choir. Where is the fun in that? The truth is, progress only happens when people find common ground and build something on it. And when it comes to closing the skills gap, we need progress.

Last month, I ran into Charles and interviewed him on camera about the projects we’re working on, and learned a few more things I hadn’t heard in the press. I’ll post the footage later. For now, if you’re still reading, and would like to read a little more, check out the attached article. It explains in more detail why our foundations are aligned on the importance of work ethic. If you like it, share it with your friends.

I don’t see what could possibly go wrong…