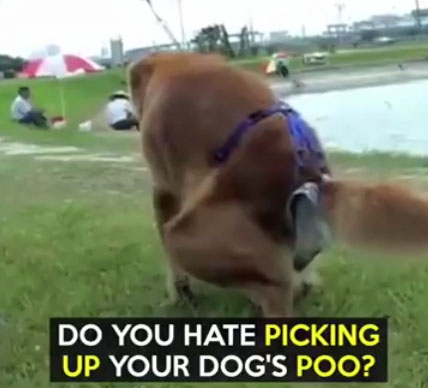 A quick glance at The Biped’s wall today reveals two things of passing interest. First, it appears that 4 million people have decided he’s worthy of their friendship. Secondly, it appears that someone has developed a product that allows me to crap directly into a bag. I have no idea if these two occurrences are in any way related, but both seem equally unlikely, and correspondingly astonishing in their own right.

With respect to The Biped, I just don’t get it. Sure, he’s amusing in short bursts, and quite capable of creating the illusion of likability for those who pay him to do so. He’s also reliable, and almost never forgets to feed me. But come on – this level of widespread affection from four million people who have never even met His Majesty suggests an appeal I’ve simply not had the pleasure to personally witness. Perhaps one day I’ll see whatever it is you all see, but for now, all I can do is shake my head and say there’s no accounting for taste.

Now, regarding the “Poo Trap,” a revolutionary mechanism that attaches to my ass and saves my Human Butler from the hardship of bending all the way down to the ground and putting his precious opposable thumbs to use. Seriously?

I’ve reviewed the tape several times, and frankly, I see nothing I like. Multiple harnesses with multiple attachments. Metal clips and plastic fasteners and plastic bags of various sizes, along with the suggestion of Velcro. Between the leash and the collar, all these added accoutrements imply a level of restraint entirely at odds with the whole proposition of “going for a walk.” No thank you.

Of greater concern, is the presence of magnets. As a rule, I don’t like magnets, and after watching them at work here – in slow motion – I like them even less. Honestly, I can’t tell if these magnets are the traditional type best known for grabbing onto steel, or if some bipedal necromancer has developed a whole new kind of magnet – the kind of magnet that can actually suck the poo right of my bowels and straight into the bag. Because that’s sure as hell what it looks like in this video, and I do not care for it. No sir, not one bit.

It occurs to me that H. Sapien has forgotten that just because a thing can be done, doesn’t mean it should. Several years ago, after my balls were removed, some of you sent me neuticles – prosthetic testicles to help with my self-esteem. I honestly thought it was a joke, until I saw the photos online. Now, I’m convinced the Boxer around the corner and the Beagle next door are walking around with faux nuts. It’s unseemly.

To my fellow canines, I say this – if your testicles are gone, deal with it. You’re not alone, and frankly, you’re better off without ‘em. And bipeds – if you don’t like picking up dog crap, get a cat, and congratulate yourselves he dumps in a box. Do you really want to live in a world where nobody knows where to pee and all the dogs have to crap in plastic bags held from their asses by magnets? If you ask me, it’s time for somebody to grow some neuticles and quit looking for the easy way out of everything. Sometimes, you just gotta pick up the crap.