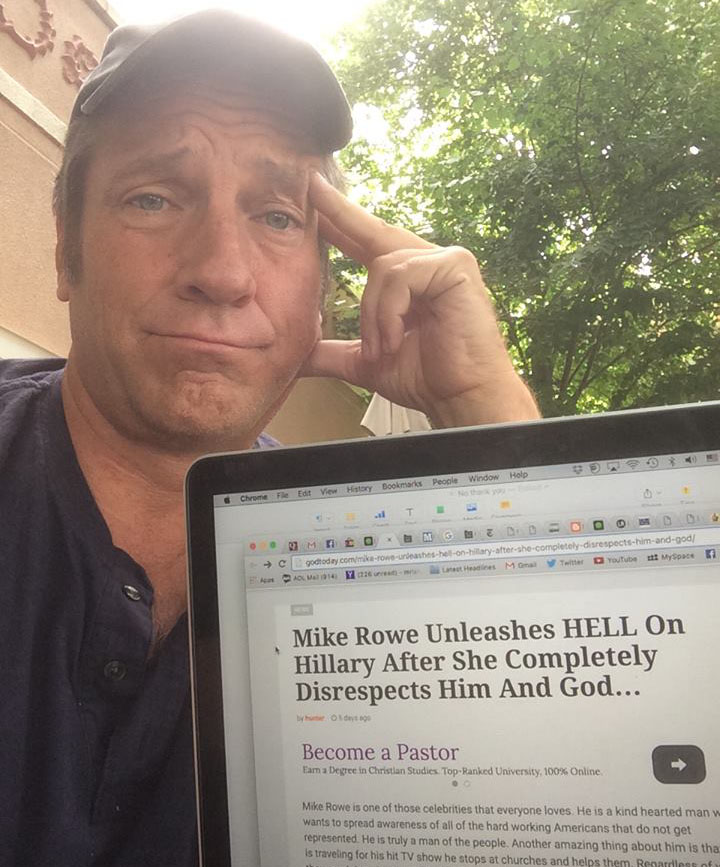 Hello, Mike Rowe! Whether or not you support her candidacy, I wonder if you were pleased that Hillary Clinton specifically mentioned in her acceptance speech that we need training for skills and trades in addition to traditional college. Thought of you and your foundation immediately. Thanks for all you do.

I’ve always tried to to give credit where I think it’s due, and what Hillary said last week regarding the trap of a four-year degree certainly deserves credit. As I’ve been saying for years, an education is critical, but a 4-year degree is NOT the best path for the most people. Though I disagree with her push for “free” college, (and a few other things,) I’m flattered and pleased to hear the mikeroweWORKS gospel shared with a national audience. (Naturally, my attorney’s will be suing her for plagiarism, but that’s another matter.)

Speaking of Hillary, many of you have asked me to comment on an article that recently appeared on a website called “God Today.”

It’s fair to say the author of this piece – a guy called Hunter – writes with a level of imagination best described as “active.” Alas, his commitment to anything resembling journalism is best described as “non-existent.” Consider the headline. “Mike Rowe Unleashes HELL On Hillary After She Completely Disrespects Him And God!”

First of all, the only “hell” I’m capable of “unleashing” comes in the form of a 14 pound terrier named Freddy. For liability reasons, I’ve been advised not to turn him loose on anyone – even a politician. Secondly, Hillary Clinton did NOT call to tell me that she refused to support mikeroweWORKS, as Hunter so vividly hallucinated. Nor have I ever challenged Hillary Clinton to reveal her “Christian values.” That conversation never took place, nor did any of the alleged dialogue therein.

Along with many other flights of fancy in this article, is the fascinating claim that Donald Trump included a printed “bible verse” in the pocket of the bathrobe he sent me. This is not true. Believe me, I checked the pockets, twice. There was no trace of anything biblical. Just some luxurious lint from The Trump Tower, and an empty tube of bronzing cream.

Here’s the thing. If my full time job was to correct all the inaccuracies written about me, I’d be working round the clock. That’s why I usually turn the other cheek. However, when the ninth commandment goes this far out the window – especially at a website called “God Today,” – and false prophets use my name to deceive the masses, I have to wonder if the editorial staff is up to speed on that whole “love thy neighbor” memo that went out a few thousand years ago.

Point is Hunter, if you’re determined to cast the first stone, you don’t need to pull it from your butt. There’s enough unflattering truth on both sides to draw blood without resorting to pure fiction. And who knows? Maybe the truth will set you free? At the very least, maybe it’ll inspire you to include your last name in a future byline.

Finally, with respect to the truth, you’re correct about one thing – Donald Trump was the only candidate to contribute something to auction. However, his bathrobe did not sell for $11,000, as you incorrectly claimed. It went for $15,750.00, all of which goes to charity. Which if I recall, begins at home…