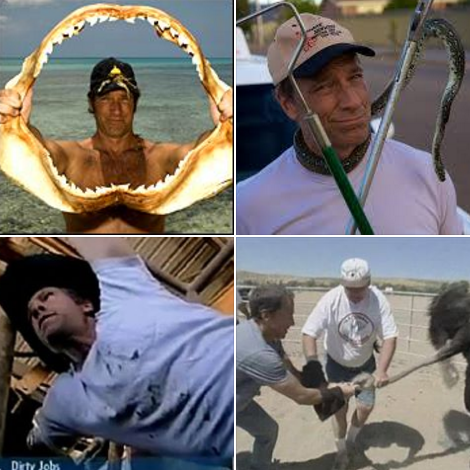 Hi Mike. Shark Week is just not the same without you hosting it. It’s fun to hear your voice on all the old shows, but when will we see you again in the water again?
Sharon Galt

In the words of Johnny Mathis, let’s go with “The 12th of Never.”

The first time I hosted Shark Week I ran out of air sixty feet down and got dragged to the surface by a reporter from TV Guide. The second time I got bit by several Reef Sharks and shook like a tug toy in the process of testing a “shark suit.” The third time, I nearly froze to death in The Arctic Circle while conducting an autopsy on a Greenland Shark. Along the way, I’ve swum with Great Whites in South Africa, cavorted with Tiger Sharks in Durban, tested some dubious “repellant” on a Hammerhead in Bermuda, stuffed and mounted a Gray Shark in Florida, helped a Mako mate in The Bahama’s, and so forth. So no, Sharon – I think I’m done with one-on-one shark interaction. In fact, I might suggest the time has come for the network to dedicate a week to some other creature worthy of our collective dread. Ostriches, for instance?

Last year, sixteen people were killed by these ridiculous looking birds – twice the number killed by sharks. Don’t be fooled by their goofy looks. Ostriches are dinosaurs – just like sharks. They stopped evolving a long time ago. They can go from 0 to 45 mph in a few seconds. They can kick with 2,000 pounds of force. Their razor sharp talons can disembowel a man in the blink of an eye, and their breastbones are thick enough to stop a bullet. Plus, they walk around with that crazy, jacked up backward knee-thing popular with aliens and ghouls who crawl across ceilings in bad horror movies. Couple years ago, I saw an ostrich charge into a door that someone left open on an F-150. Tore the thing right off it’s hinges. Ostrich Week – I’m telling you, it’s a ratings grabber, guaranteed.

Or what about snakes? Whenever I got bitten by a snake, ratings went through the roof. Like sharks, snakes come in hundreds of species, live mostly out of sight, and inspire a deep-seated, primal dread. But unlike sharks, the fear inspired by snakes is somewhat justified. Snakes kill over 50,000 people every year, and maim a whole lot more. I know this because I just narrated a video for The World Health Organization, which officially freaked me out. I’m telling you, a snakebite from a cobra or a viper will make you yearn for an encounter with a Great White. Snake Week = Ratings Gold.

Of course, for sheer death, the best creature to feature would have to be the mosquito. Last year, mosquitos killed over 750,000 people. That’s 749,992 more than sharks. True, a mosquito won’t bite you in half, but aside from killing with impunity, they’re annoying in ways a shark can’t begin to match. A reporter from Outside Magazine once asked me to identify the most terrifying sound in the animal kingdom, expecting me I guess to invoke the growl of tiger, (which kills hundreds,) or the trumpeting of an angry elephant, (which also kills hundreds,) or maybe the mournful howl of the timber wolf, (also deadlier than sharks, by far.) But I went with the high-pitched whine of a mosquito vectoring in on my neck, moments before falling asleep. Not only does that sound remind me of every blood-born disease there is, it’s requires me to leap out of bed, turn on the lights, and embark on a relentless quest to kill the little bastard with my slipper before going to sleep. I simply can’t rest with a mosquito in the house. Mosquito Week would be a real eye-opener.

PS. Cow Week, on the other hand, could be the sleeper event of the summer. Last year, 22 people were killed by bovines on the attack – making cows 300% more deadly than sharks. True, they might not instill the visceral terror of an apex predator, but that could easily be changed with some scary music and creative editing. The numbers clearly indicate there is something to fear from these “Predators of the Pasture,” and I suspect – with the right promotion – we could create a “must see” event that would attract lovers of hamburger as well as the lactose intolerant. Plus, apropos of nothing, you can reach all the way into a cows uterus with your bare arm, which never fails to resonate with the key demographic. Cow Week – A Mooving Experience…