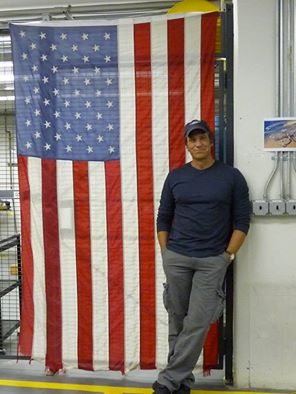 Tomorrow morning, with your permission, I’m going to show your Independence Day video to my social studies class. I’d also like to encourage every other teacher I know to do the same. Thank you so much for posting it. Is there a hard copy available as well?

Permission granted. I’m afraid the original is a hot mess of unintelligible scribblings, corrections, and beer stains. Here’s a digital version though. Feel free to correct any typos and distribute as you see fit. Also – there might be some other good conversation starters over here.

PS My dad taught social studies for years, and always said that history is made less interesting by people far too obsessed with dates and times, and not fascinated enough by the people who actually made it. I suspect you two are on the same page…

John’s a farmer in Hopewell, New Jersey. Like many working farmers, John feeds lots of Americans who have no idea where their food comes from. But unlike many of his peers, John is not struggling to make a living. He’s prospering. In fact, John is downright rich.

So too is Frank. Frank made his money doing whatever it is international businessmen do. Something to do with The Mercantile Exchange. He was born in Wales and educated in the very best schools. After becoming a legal citizen of this country, he made an absolute fortune. Now he employs more people than he can keep track of.

And then there’s Richard. Richard is one of the wealthiest lawyers in America. He studied law at Princeton – which his ancestors helped build. Now he sits on the bench of The New Jersey Supreme Court, where his reputation as a jurist earns him the respect of politicians on both sides of the aisle.

Not long ago, John, Frank, and Richard sat down with dozens of other wealthy Americans at a private Men’s Club in Philadelphia to discuss, among other things, the future of our country and the current tax code. Not only do these men believe their taxes are far too high – they feel their money is being squandered by America’s leaders. They’re also offended – deeply offended – by the continual assertion that they are not paying their “fair share.”

John, Frank, and Richard, listen attentively as a number of powerful men address the group. They talk with great passion about the need to elect a leader who will stop dividing the country. So the men draft a manifesto outlying their frustrations, and announce their refusal to stop paying taxes to an administration they believe to be corrupt.

John, Frank, and Richard each sign the manifesto, along with everyone else in the room. Then, they send it off to the largest media outlets in the country and head home, to and wait and see what happens next. Well, they don’t have to wait long.

In the halls of power, America’s leaders are livid. “How can these wealthy men who have enjoyed so much good fortune complain about paying a little extra for the good of their country? Do these elitists seriously think they could have prospered without the governments help? Maybe it’s time to teach these guys a lesson?”

And so they do.

When Frank arrives at his mansion in New York, it’s been thoroughly looted. Armed troops occupy his estate, and confiscate everything of value – including his wife. She’s locked up for three months with little food or water, and not even provided a change of clothes. She dies not long after her release. Frank is crushed with despair.

John doesn’t fare much better. Troops have occupied his farm in Hopewell. John learns the Occupiers have orders to execute him. Recently widowed with 13 children, John goes on the run, moving from place to place under cover of darkness, and living on the lamb for the better part of a year. Eventually, the stress kills him.

Richard’s wealth and status make him an even bigger target. Armed men barge into his home, and drag him from bed in the middle of the night. He’s locked up, starved, and tortured. Richard survives his incarceration, but never recovers. His vast fortune is stolen, and he spends his final days utterly dependent on the kindness of friends.

If their names are unfamiliar, it’s probably because they’ve been overshadowed by other men who signed the same manifesto. Men like Benjamin Franklin, Thomas Jefferson, and John Adams. In total – 56 men – some more famous than others – whose names are now preserved for posterity on the bottom of that troublesome document that so enraged The Occupiers in The Red Coats.

Unlike most revolutions, ours didn’t start with an angry mob armed with pitchforks and guillotines and nothing to lose. That was France. Our revolution started because fifty-six wealthy men with everything to lose – put everything on the line – for a country that didn’t even exist yet.

The Internet is full of exaggerated accounts of what happened to the original signers, and that’s a shame. Because the truth of what really happened back in that exclusive Men’s Club in Philadelphia – also known as The 2nd Continental Congress – is remarkable enough with no embellishment.

These 56 men – these one-percenters of 1776 – could have easily paid whatever new tax was being demanded by their King. They could have easily lived out their lives in comfortable peace. But they didn’t. They chose liberty over safety. When they signed that troublesome manifesto, they weren’t just declaring their independence – they were signing their own death warrant. And when they pledged their lives, their fortunes, and their sacred honor, they weren’t just making a promise to The King of England, or to each other, or to the rest of their fellow colonists –

They were making a promise to you and me.
And they kept it.

Two hundred forty years later, as the hotdogs plump up on the grill, and the fireworks explode overhead, their promise – and their courage – are still worth remembering.

Anyway, That’s The Way I Heard It…