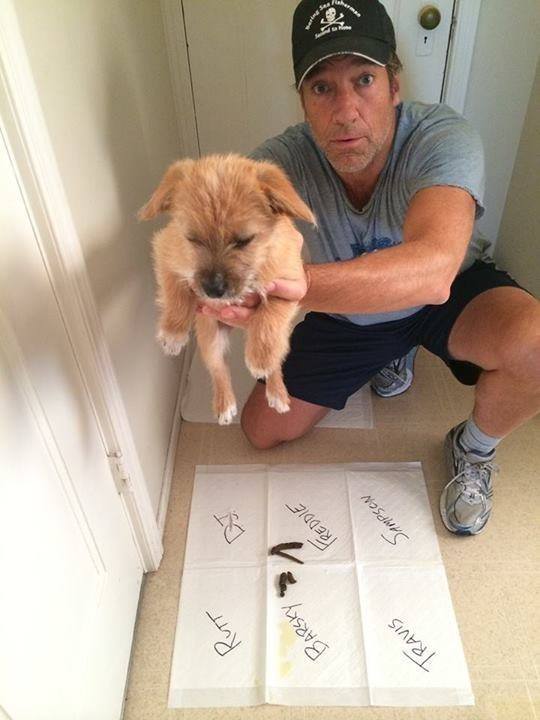 Earlier this morning, midway through my regularly scheduled constitutional, I heard The Biped tell a nosy neighbor I was two years old today. The neighbor then replied, “That’s fourteen for you and me.”

Can someone please explain what the hell that means? How can I be two and fourteen at the same time?

Regardless, I don’t see how this can be my birthday, because the attached photo was taken approximately two years ago, and as you can plainly see, I am well clear of my mother’s womb. Perhaps The Biped was referring to my “Naming Day,” as opposed to my birthday, and if that’s the case, I suppose I should take a moment to thank you all for deciding upon the moniker with which I’m now saddled.

According to the attached article – which seems almost too incredible to fathom – my name was the product of a bowel movement and a very troubling game of bingo. Had I not seen the images myself, I’d have dismissed the story as an urban legend.

Anyway, to those of you who participated, thanks for giving me my name. As for The Biped, I remain grateful for whatever it is he does on my account, but honestly, after reading the attached, I’m beginning to wonder what he was like as a fourteen-year old, and if he’s really that much different at 54. (Which, if I’m not mistaken, would be 378 for you and me.) I tend to think not.

PS. (As for the ambiguity surrounding the spelling of my name, it was I who insisted upon dropping the “ie” in favor of a “y.” I have no good reason for doing so, and feel no great need to explain myself. And no – the decision to come when called has nothing to do with spelling or phonics, as the Biped can attest.)