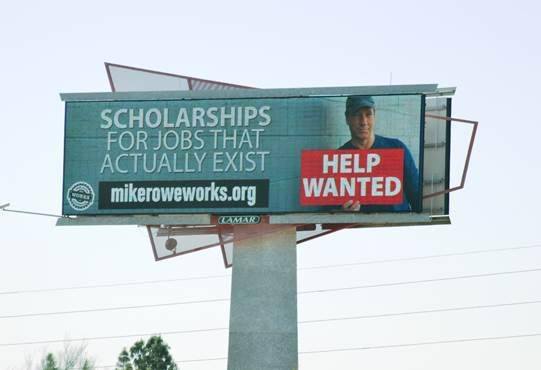 Couple years ago, I spent a week one day putting up a billboard in Tyler Texas. Those of you who saw the episode might recall a truly likable lunatic named Gene, who showed me the finer points of completing a giant erection in the midst of a thunder storm. (There’s a sentence I never thought I’d write…)

Ever since, I’ve dreamed of looking up from some crowded freeway and seeing mikeroweWORKS advertised in all of it’s full, horizontal glory. Today, thanks to the unsolicited generosity of a guy named Todd, my wish has finally been fulfilled. 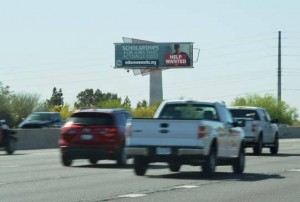 Todd Porter is the VP and GM over at Lamar Advertising in Lancaster. Lamar owns several billion billboards, some of which are bound to be blank at any given time, as various advertisers come and go. Todd, being a genius as well as a philanthropist, saw this wasted white space and wondered if maybe his favorite non-profit foundation might appreciate some free advertising? Obviously, he was correct, and clearly, I am much obliged.

As some of you know, we’re in the process of awarding another $400,000 tranche of Work Ethic Scholarships to those rare men and women who are interested in learning a skill that’s actually in demand. You’d be surprised how hard it is to find such people so I’d like to officially offer a heartfelt thanks 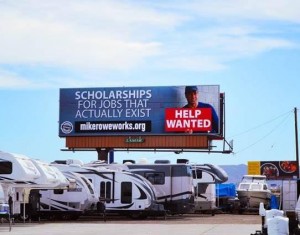 to Todd and everyone else at Lamar for helping us spread the word. I’d also like to invite anyone willing to sign the S.W.E.A.T. Pledge to apply forthwith at mikeroweworks.org.

In the meantime, thanks again to Todd, and everyone at Lamar who has helped out with this. This means a lot to MRW, and we’re grateful. See you on the interstate…