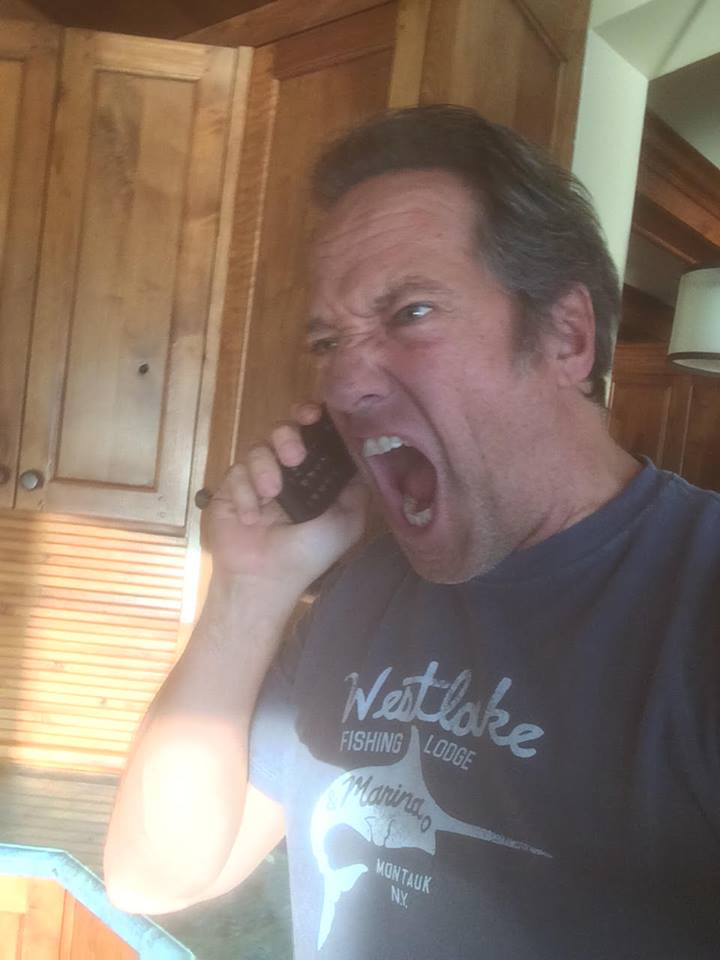 I’m writing to congratulate you on your revolutionary “Credit Card Crunch Workout.” I hate to overstate it, but this exercise program is unlike anything on the market, and far superior to any of the equipment I’ve encountered inside your actual gymnasiums!! Quite frankly, it’s ingenious!!!

I must confess, when I first realized you were still billing my credit card well after I canceled my membership, I assumed you were no different than all those other fitness conglomerates who bully and harass their former members into paying for services they no longer utilize. But now, after dealing with months of unauthorized charges and a dozen phone calls from people who speak a version of English I’ve not yet mastered, I’ve finally realized what you’re trying to accomplish – you’re trying to keep me healthy and fit, in spite of my decision to stop exercising on a regular basis!! And you know what? It’s working!!!!

Who knew that forcing me to call American Express every month to dispute your automatic charges would unleash the kind of rage that could only be offset by five hundred spontaneous sit-ups!
Who knew that seeing that same charge reappear thirty days later – even though it was credited back the month before – would enhance my dissatisfaction to such an exponential degree that I’d be driven to do push-ups until I vomited from exhaustion!! 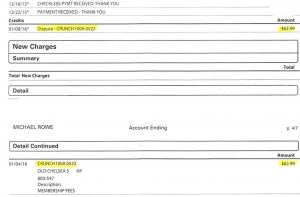 And who could suppose that repeated phone calls from illiterate bill collectors who argue that my imaginary contract permits you to bill my account until the end of time, would awaken in me a wave of fury and frustration so intense I’d have no choice but begin a protracted set of burpees right here on my kitchen floor!!!

The Credit Card Crunch Workout is unique, because it allows me to access great reservoirs of untapped contempt I never knew I possessed, and then, channel my desire for violence into the kind of common-sense exercise program that anyone can do in the privacy of their own home. Just a few moments ago, I received my monthly statement and saw yet another demand for $62.99!!! Awesome!!!! Already, I can feel the blood pounding in my ears, just like it used to when I spent an hour on one of your soul-deadening exercise bikes!! So, when I finish typing this, I’m going to run outside, scream at the top of my lungs, and sprint through the neighborhood until I collapse on the sidewalk in a heap of healthy fitness!!! It’s just like having my own personal trainer, at a fraction of the price!!!

That’s a long way of saying thanks. The Credit Card Crunch Workout elevates my heart rate faster than any Stair Master or treadmill, and really is the perfect solution for anyone who refuses to pay for a gym membership long after its expired, but would still like to stay healthy and active. And the results are undeniable. After just four months of unwarranted charges and incomprehensible phone calls from the sub-continent, I’m feeling healthier than ever, and looking forward to your next set of demands!!!

Anyway, God Bless you all, and thanks or running such an innovative company!!!!!! 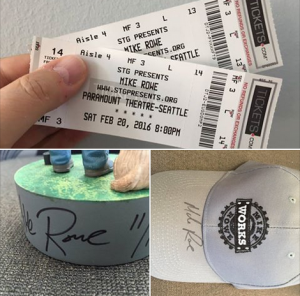 Yours in Fitness,
Mike Rowe

PS. One thing to consider, moving forward. My business partner has become concerned by the amount of time I’ve invested in The Crunch Credit Card Workout. She has prepared an itemized bill that reflects the cost of my interactions with your representatives, including phone calls, statement reconciliations, and of course, this letter. Naturally, the amount due is based on my hourly rate, prorated and multiplied by many, many hours. Thanks in advance for your prompt attention to this matter.

PPS. In lieu of payment, Crunch is welcome to bid on the current fundraiser for mikeroweWORKS. Included in this weeks booty is an American made talking bobblehead of me and Freddy, signed and numbered moments ago by yours truly. Also included, are two tickets to “A Dirty Talk with Mike Rowe,” (still figuring out what that means,) and a private meet and greet after the show.
The auction ends later today, so chop-chop. (You might say it’s… crunch time?)