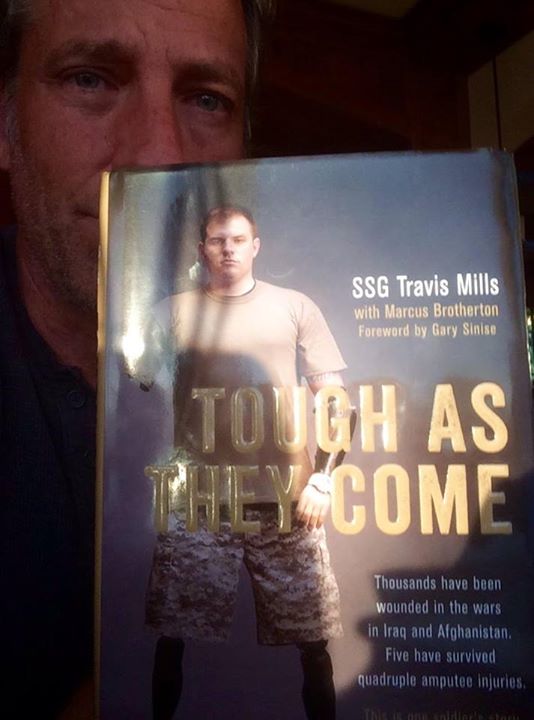 I know lots of tough guys. Crab fisherman, cage-fighters, roughnecks, coal miners. I’ve got a Rolodex of bad-asses I’ve met over the years, and I suspect I’ll meet a few more before I’m done. But I’m pretty sure I’ll never meet anyone tougher than Travis Mills.

Travis got his arms and legs blown off in Afghanistan. He was 24 at the time, midway through his third tour in the 82nd Airborne, with a new wife and baby. The IED that blew up under him turned a routine patrol into an event that would transform is life. How he recovered, what he endured, and who he’s become as a result is just part of what’s in this book.

If you’re looking for a modest way to commemorate Veterans Day, get a copy and read it, post haste. You’ll feel good about the species, and humbled by the sacrifices so many have made on our behalf. You’ll also be amazed by the complete absence of self-pity. Really, it’s terrific.

One of my favorite fictitious characters is another Travis – Travis McGee – brought to life by the one and only John. D. MacDonald. McGee was another tough guy, and made some of the most quotable observations of all time. My favorite is this one.

“The only thing in the world worth a damn is the strange, touching, pathetic, awesome nobility of the individual human spirit.”

I don’t recall what or whom Travis McGee was referencing when he said that, but I can assure you, it applies to Travis Mills in spades. Trust me, Staff Sargeant Mills is the real deal, and you’ll be a better person for getting to know him. Be warned though. Whatever excuses you might currently employ to explain whatever disappointments you might currently endure will go out the window after reading Travis’s story. And you will be left with the potentially uncomfortable truth that you, and only you, are responsible for whomever it is you’ve become.

PS. I met Travis a couple years ago in DC. The story of our encounter reached nearly 16 million people. If you’re interested, (and even of you’re not,) it’s still here.