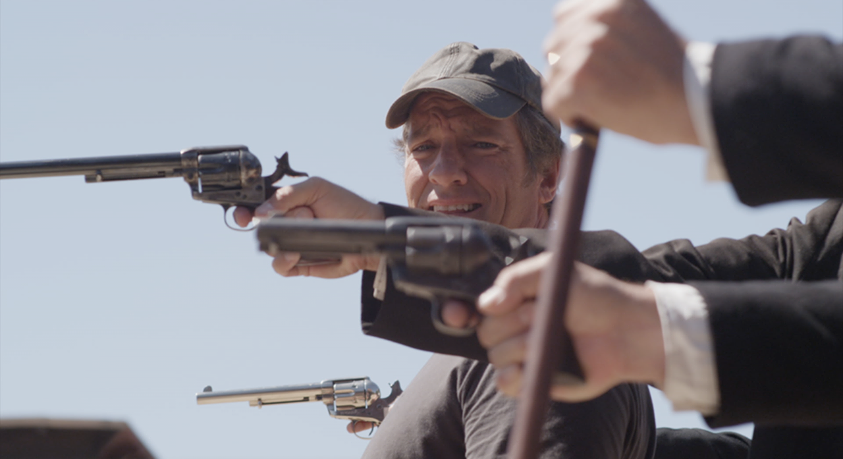 I recently viewed a poster for the NRA on Facebook with your image with a statement I can only assume you made. “A man’s man owns a firearm.” Why you would say something so boldly sexist, and bigoted? Implying that a man who chooses NOT to own a weapon is what? Less than a man, a WOMAN, a neuter?

I am a U.S. ARMY VETERAN who has trained on various weapons, knows how to maintain, store and use multiple firearms. Now as a civilian, I CHOOSE NOT TO OWN A WEAPON. Can you clarify what you meant in that “man’s man” statement and explain what a man such a myself is, if not a man’s man?

E.K. Billie
Veteran, conscientious citizen, and a man who chooses not to own a firearm.

First of all, thanks for your service. I’m grateful. Secondly, I’m happy to clarify my comments, and address a few of your concerns.

Over the years, various organizations have created a number of posters similar to the one that gotten you upset. On the Internet, these posters are called “memes.” Typically, people will take something I’ve written, Photoshop my face next to my words, insert their logo next to my head, and blast the meme out into cyberspace. And just like that…poof! Instant endorsement! This is the one you’re referring to.

To be clear, I did not give the NRA permission to use my name and likeness. I am not their spokesman. Nor am I member. I do own a gun though, and I suspect I always will. But that’s beside the point. The point is, you saw something on your computer screen that upset you, and now, you want to know why a guy you’ve never met thinks you’re “less of a man,” just because you don’t own a gun. You’re wondering what might compel a guy you don’t know to say something “bigoted and sexist.”

Let me say first that the quote is 100% accurate. Those are my words, and they were lifted verbatim from my reply to The New York Times “27-Point Guide On Being a Modern Man,” (whatever that means.) I was asked by a fan to respond to The Times editorial from a “Man’s Man,” perspective. So, tongue firmly in cheek, I presented an alternative 27-Point Guide on what it means to be a “Man’s Man,” from my personal point of view. In the course of doing so, I replied to item #25 on The Times list, which read, “The Modern Man has no use for a gun. He doesn’t own one, and he never will.”

Clearly, The Times is suggesting that men who own guns in this day and age are something less than “modern.” My response was an attempt to juxtapose the absurdity of that contention, with an equally absurd implication that a man who does NOT own a gun, is somehow “less manly” than one who does. Get it?

Satire. Parody. Irony. These things all require context. But the meme you saw provides no context at all. Stripped of it’s original setting, my comments now resemble something else altogether – a very deliberate statement-of-belief from me, pushed into your news feed by an organization that wishes to associate my words with their agenda.

Truth is, I support a lot of what The NRA stands for, and I’m happy that so many on their page see me as an ally. In many ways, I am. I’m grateful we have the second amendment, and I’m happy to defend it. I am not persuaded that easy access to guns is the reason criminals use them to commit so many violent crimes. But I don’t appreciate the NRA or any other organization using my name and likeness without permission. It’s rude. Moreover, it causes all sorts of problems with a litany of overly trusting Americans who still believe the crap in their newsfeed is the truth, the whole truth, and noting but the truth. With respect, E.K., you should know better.

Finally, I’m not in a position to tell you “what kind of man you are.” I suspect you’ll need to sort that out yourself. But if I were you, I wouldn’t rely too heavily on the opinions put forth by The New York Times, The NRA, or some B-list celebrity with a Facebook page.