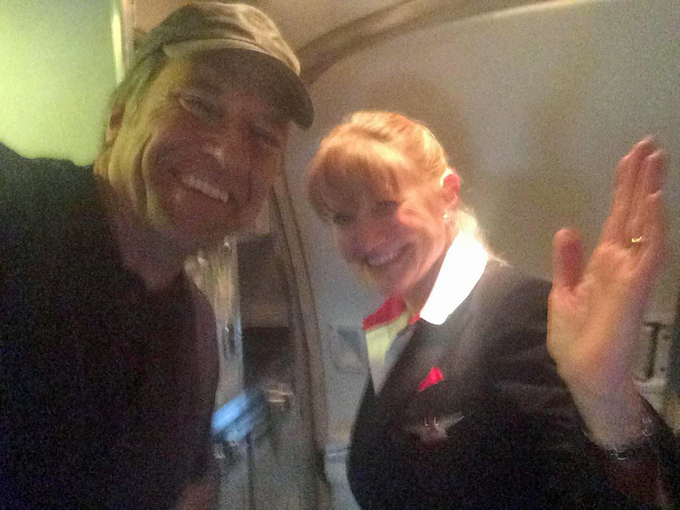 Yesterday, I flew home from Los Angeles on Delta Flight 1822. I upgraded with miles, as I always do, and boarded last. No bags. The flight attendant greeted me with a warm smile, and asked if I’d like a drink before take off. I ordered a cold beer, and settled into seat 2B.

I’ve sat in 2B many times before. It’s a fine seat, but it’s an aisle seat, and therefore not my first choice. I prefer a window, ideally in the last row of first class. I like the last row because I can recline my seat without the guilt of invading someone else’s space. And I like the window because I have a larger-than-average bladder. Consequently, I don’t have to interrupt my seat mate every half-hour with another bathroom run. Or, be likewise interrupted.

Last week on a flight back from Chicago, I was in 2B when the guy next to me realized he had to pee. It must have come as a shock to him, because he didn’t give me any sort of heads-up. He just started crawling over me. Before I could unbuckle and get out of his way he had both hands on my armrests, and was preparing to swing himself over me and out into the aisle. He must have thought himself a gymnast or an acrobat, but alas, he was neither, and wound up falling on top of me with a loud series of grunts and muttered apologies. Awkward. But I digress.

The flight attendant yesterday was extremely attentive. Her name was Jill. She brought my beer to 2B with alacrity, and asked if I needed anything else.

“No thanks,” I said. “I’m good.” A minute later she returned, eyebrows arched.

“Yes?” she said.
“Yes what?” I asked.
“Can I get you anything else?”
“Umm..maybe another beer after take off?”
“Of course!” she said. Jill smiled and walked away.

A few moments after takeoff, Jill was back. She was holding another Miller Lite. I was barely into the first one, but it was starting to warm up a bit, and anyone who drinks Miller Lite knows it goes down a whole lot easier if it’s cold.

“Don’t mention it,” she replied. “Will there be anything else?”

“No thanks,” I said. Jill smiled and walked away. Five minutes later, she was back, eyebrows arched again.

“Another beer,” she asked?

“No Jill, but thanks. I’m good.” Jill tilted her head, ever so slightly, as if to determine whether or not I might be withholding some key information.

“I’ll be out with some snacks in a few minutes,” she said.

“Well then, I suppose I’ll see you then.”

I smiled. She smiled.

“Are you sure I can’t get you anything right now?” We stared at one another for a few seconds.

“Well…how about a glass of ice?” Jill smiled.

I sometimes drink beer over ice, especially if it’s a Lite beer. I would never dilute the natural goodness of something like a Lagunitas or a Dog Fish Head, but with Miller Lite, what difference does it make? Am I right?

Jill returned a few moments later with a glass of ice and poured my beer into it. I thanked her and she smiled. 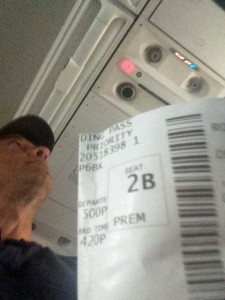 “Will there be anything else? she said.”

Five minutes later, my tray table was down, my computer was out, and I was engrossed in a rough cut of Somebody’s Gotta Do It. My headphones were on, so I didn’t hear Jill when she returned to see if everything was OK. I jumped though, when she tapped my shoulder.

“Why, nothing at all. The question is, what can I do for you?” She was still smiling.

“Honestly Jill, I’ve got everything I need. Really.”

Jill walked away, and I returned to my work, but only for a moment. The woman in the window seat next told me she needed to use the restroom. She was the spitting image of Scarlett Johannson, though clearly, cursed with an average bladder. I waited a beat, on the off chance she might employ the same strategy as the guy in Chicago. No such luck. So I disentangled myself from the computer, removed my headphones, and returned my tray table to it’s stowed and locked position. I then stepped into the aisle and let her out. While she was gone, Jill materialized once again, with another beer and another glass of ice.

“I assume you’re waiting for this?”

“Thanks Jill, but do me a favor – don’t bring me any more, OK? I’ve got everything I need.” Jill smiled.

A few minutes later Scarlett Johansson returned, and once again refused to climb over me. So I stepped into the aisle and allowed her to return to her seat. Three minutes later, Jill was back.
“What can I get you, Mr Rowe?”

The Captain asked the flight attendants to prepare the cabin for landing. A second flight attendant came by to clear away my third, unfinished beer, and then Jill reappeared, standing expectantly in the aisle, looking down at the top of my head.

“What would you like, Mr. Rowe?
”
“Honestly, Jill? I’d like to fly the plane. Please inform the pilot I’ve only had a few beers, and would very much appreciate the opportunity to land this jet.”

I could feel Scarlett Johansson looking at me with a vague uneasiness. Jill smiled and told me that she and her family had always enjoyed my humor. Then she reached above my head, clicked off the flight attendant call button, and returned to the galley. 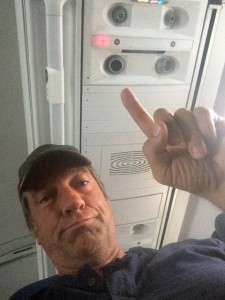 Interesting. I hadn’t pushed my flight attendant call button the whole flight. Nor had I seen anyone touch it until now. But of course, when you wear a ball cap, you lose the vertical part of your peripheral vision. Now, as I stared up it, I saw the call button re-illuminate all by itself. I also heard the accompanying “ding.” I also saw Jill looking at me from the galley. She was still smiling, but I could see her jaw clench.

Thanks to a faulty wire, I had assumed Jill was quite possibly the most obsequious flight attendant in the history of modern aviation. Likewise, Jill had every reason to assume I was the neediest passenger of all time, and quite possibly, a hopeless alcoholic. Happily, the true culprit was identified, and Jill and I each came to realize the other was not insane. But it was a very near thing.

Something to think about, should you find yourself aboard Delta Flight 1822, passing the time in seat 2B…