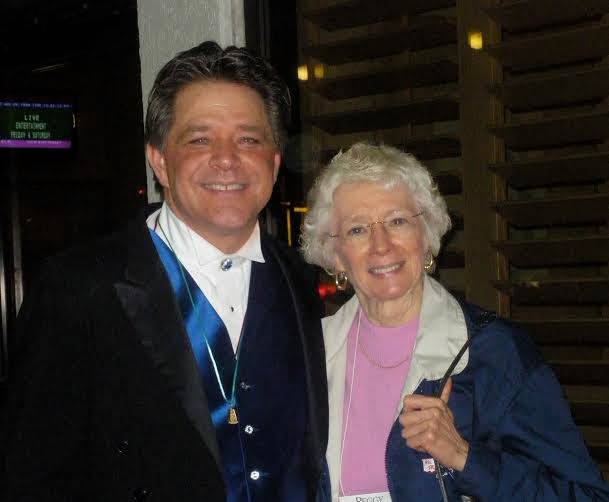 This is my good friend Michael, and his mother, Peggy.

I’ve known Mike thirty years. He’s one the best people I’ve ever met. Kind, humble, talented, devoted to his family, loyal to a trust, and generous to a fault. He’s flawed of course, as we all are, but as people go, he’s better than most, and the reason is simple – his mom.

Peggy Gellert is one of those rare humans who makes everyone around her try a little harder. I don’t know if that’s her intention – I only know it’s a fact. Jack Nicholson had a great line in “As Good As It Gets.” He said to Helen Hunt, “You make me want to be a better man.” Well, Peggy makes you want to be a better person. A better friend. A better daughter. A better son.
People like Peggy can let you know precisely where you stand without saying a word. We should all be so lucky to have such people in our lives. They keep us honest without judging. They keep us polite without lecturing. They make us better simply by being in the room.

Years ago, Peggy came to a concert where Mike and I were performing. Back in the day, we used to sing in a barbershop quartet, inflicting close harmony and vaudevillian schtick on unsuspecting ears. This was an outdoor concert in Dundalk MD, and there was a big crowd on hand. Backstage, Mike was uncharacteristically nervous. He pulled me aside and said, “Hey, be careful what you say out there, OK? My mom’s in the audience.”

He didn’t have to tell me twice.

Years later, after Dirty Jobs became a thing, I ran into Peggy at another event. She gave me a big hug, and told me how proud she was to see me on television. She had questions, though. Many, many questions.

“Michael, why does the network have to constantly “bleep” you? Do they insist that you to speak in a way that requires censorship?”

“Michael, why would you put you arm inside a cow’s bottom? Isn’t there an instrument for that sort of work?”

There was no accusation in Peggy’s questions – just a genuine, affectionate curiosity. So…why did I feel perspiration forming on my forehead?

“Michael, I saw you diving with Great White sharks. Do you think it’s worth it – risking your life on cable television?”

“Michael, a scout is clean, right? Tell me, as an Eagle Scout, do you find it hard to glorify filth and raw sewage? Do you ever feel conflicted?”

I too, have a mother named Peggy. As far as I know, she and Mike’s mom haven’t spent much time together. Which is odd, since they ask me the very same questions.

Two weeks ago, I met Mike for a cup of coffee back in Baltimore. Mike sells restaurant supplies to many of the bars and restaurants in my hometown. His Uncle George – Peggy’s brother – still runs the company that’s employed him since he was sixteen. Just as we sat down, Mike got a phone call. Peggy had fallen and broken her hip. On his way out the door, Mike said to me, “You know, my mother told me that people her age who break a hip are usually gone within six months.”

“Not Peggy,” I said. “She’s tough. Tell her I said hello.” A few days later I got a text from Mike, telling me that Peggy had passed away.
A cup of coffee. A phone call. A text. A funeral.

It’s crazy how fast things can happen, isn’t it? How quickly people can leave us, after a lifetime of always being there?
The funeral is tomorrow, and appallingly, I can’t be there. My thoughts though, will be with my friend. My prayers, with his family. And my best wishes, with all those who gathered to say farewell to a wonderful woman who brought out the best in everyone.

A loving mother, who stayed for 85 years, but left all too soon.