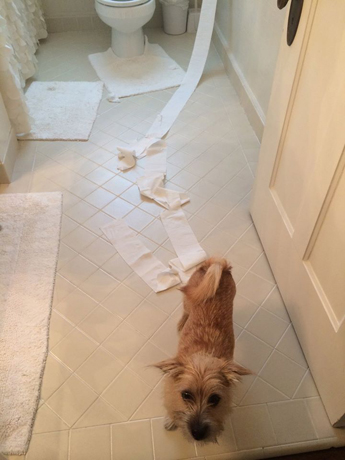 Recently, while perusing the “magazine for men” in the Biped’s study, searching for content between a preponderance of cologne ads, I happened across a collection of canine related poetry. Though obviously more appropriate in a “magazine for dogs,” I nevertheless read the following stanzas, and laughed so hard I peed on the floor. Oops. Perhaps you will too.

Pepper, Spot, and Leopold
Were sent by God, so I’ve been told,
In hopes we might all comprehend
That every dog is man’s best friend!!!

Hail hyperactive Myrtle,
Owned by folks who are infertile.
Her owners boast as she runs wild,
“She’s not a spaniel, she’s our child!”

Rags, the Shatwells’ Irish setter,
Doubles as a paper shredder.
His lunch was bills and last year’s taxes
Followed by a dozen faxes.

Kimmy, once considered ruthless,
Lies in her basket, bald and toothless.
Her youth’s long spent, so now she passes
All her time releasing gases.

Petunia May they say was struck
Chasing down a garbage truck.
A former purebred Boston terrier,
Her family’s wond’ring where to bury her.

Each Saturday at half past one,
Miss shih tzu has her toenails done.
In the chair she pouts and squirms,
Not knowing that she’s full of worms.

Most ev’ry evening Goldilocks
Snacks from Kitty’s litter box.
Then, on command, she gives her missus
Lots of little doggie kisses.

Hercules, a Pekinese,
Was taken in and dipped for fleas.
Insecticide got in his eyes,
Now he’ll be blind until he dies.

The Deavers’ errant pit bull, Cass,
Bit the postman on the ass.
Her lower teeth destroyed his sphincter,
Now his walk’s a bit distincter.

Each night, old Bowser licks his balls,
Then falls asleep till nature calls.
He poops a stool, then, though it’s heinous,
Bends back down and licks his anus.

Dachshund Skip from Winnipeg
Loves to hump his master’s leg.
Every time he gets it up, he
Stains Bill’s calf with unborn puppy.

A naughty Saint Bernard named Don,
Finds Polly’s Kotex in the john.
He holds the blood steak in his jaws
And mourns her coming menopause.