Anita Berzins writes,
Dear Mike
OMG! You contacted me on Match.com! If you did not, then someone is using your picture as a fake profile. You are awesome Mike! I sure hope this is not fake….

Hi Anita
Have you ever played Whack-A-Mole? It’s a carnival game that tests your reflexes. The rules are simple. You stand in front of a tabletop with seven holes drilled into the surface. You wait for a mole to poke it’s head out from one of the holes. When the mole appears, you whack it over the head with a mallet. As the game progresses, more moles appear with increasing frequency. The more moles you whack, the higher your score.

I haven’t played Whack-a-Mole in ages, but I’ve discovered an online version that’s no less stimulating. I call it “Whack-a-Mike,” and to my knowledge, I’m the only one playing. Armed with a metaphorical mallet, I sit in front of my laptop, and search the world wide web for illicit versions of me. When I find my name or likeness being used in a deceitful manner, I whack myself off the offending site. Invariably, my face will resurface somewhere else it’s not supposed to be. When that happens, I whack myself some more, until I go away. And so on.

Like anything else Anita, whacking yourself online takes practice. My first whacking occurred back in 2005, when my face popped up next to a banner ad for a disposable diaper service. There was an accompanying quote that read, “We understand a thing or two about dirty jobs.”
While I do in fact know a thing or two about getting dirty, I couldn’t tolerate that kind of implied endorsement. So I whacked myself off, fast.
Soon thereafter, my face resurfaced on a website for a company that cleans and maintains Porta-Potties. That too, required immediate and vigorous whacking, which I accomplished with great enthusiasm.

Of course, copyright violations and legal misuses can usually be rectified with one or two well-placed whacks. Far more challenging, are the lone impostors who assume my name and likeness for no obvious reason. These reprobates lurk in the darkest corners cyberspace. Rooting them out has required me to whack myself in a variety of dingy chat rooms and seedy forums. But I’ve also had to whack myself in some very respectable venues.

On the Discovery website, I’ve whacked myself more times than I can count.

I’ve whacked myself on Instagram and Reddit, but when I signed up for Twitter, Whack-a-Mike reached a whole new level. Not 24 hours after registering, several people were using my face as their personal icon, and destroying my fragile reputation in 140 characters or less. As a result, I found myself whacking more than tweeting.

Facebook of course, is a veritable whackers paradise. Just last week I had to whack myself off three different pages in the same day. (Trust me – that’s not as easy as it used to be.) Even The Official Dirty Jobs Facebook page has become a source of confusion. Because my face is all over the page, thousands of questions have been directed to me by viewers who still think the show is in production. Lots of them now think I’m ignoring them. That’s unfortunate. As many of you know, this is the only page online where you can be assured that I’ll read your questions before ignoring them.

But as much as I’d love to whack myself off The Dirty Jobs Facebook Page, doing so would be capricious. Discovery has every right to use my face to promote the show, and really, I’m glad people still have a place to watch it. Truth is, whacking yourself off publicly is not always the best option – even when it feels like the obvious thing to do. 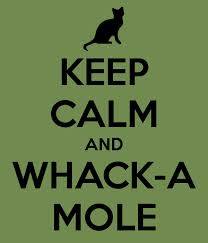 If all this whacking sounds like complaining, I apologize. Obviously, the trials and tribulations of a B-list celebrity trying to protect his public image in the digital age are inconsequential, especially when compared to the millions of others who have been bullied and burgled on the world wide web. Identity theft is no joke, and neither is the chaos that results when people pretend to be someone they’re not. So allow me to be serious for a moment, and share with you my one, steadfast belief regarding the Internet – a belief that’s evolved from a decade of protracted whacking, and summed up best by my favorite quote from my favorite fictitious character – the one and only Travis McGee. Here it is:
“Be wary of all earnestness.”

McGee shared that little nugget of wisdom long before the average twelve-year old in his mothers basement could play Call of Duty with one hand and steal my identity with the other. And if McGee was with us today – solving crimes and saving reputations in the digital age – he’d no doubt remind us once again that few things in the world are more suspicious than a man who demands to be trusted. And the undeniable truth that authenticity is so valuable, precisely because it’s so damn easy to fake.

With that in mind, Anita, it’s my sad duty to break your heart. I am not now, nor have I ever been, a member of any online dating site. The picture you saw is real, but alas, the profile is not. If it’s any comfort, know that as you’re reading this, I’m over on Match.com, whacking myself off with extreme prejudice. I doubt I’m the first to do so, and I’m certain I won’t be the last.

I hope I’m not too late, but if you’ve already met my impostor for an actual date in the real world, please tell me the bastard held the door and picked up the tab. Regardless, I apologize for any subsequent disappointment.

(Unless of course, he turned out to be better looking and more charming than the guy in the picture. In which case…you’re welcome!)